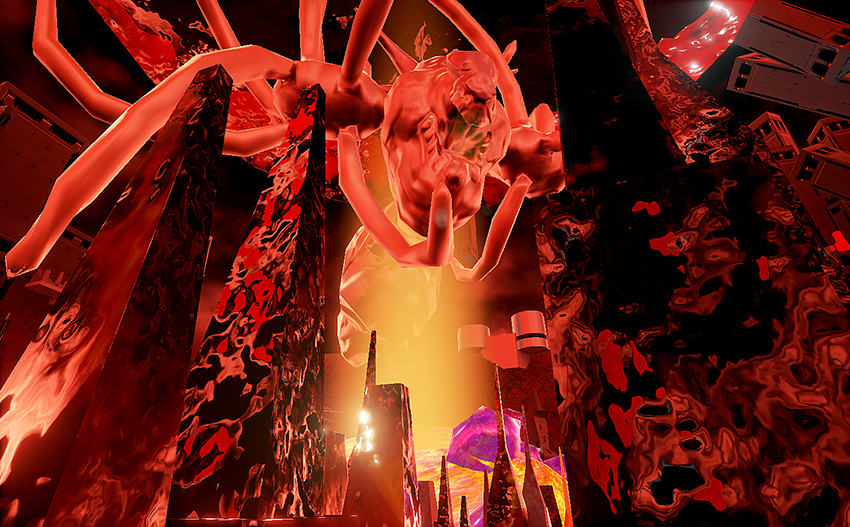 Studio art senior Christina “PhaZero” Curlee specializes in creating video games that are works of art. Curlee, who this year became an ambassador for the International Game Developers Association’s Women in Games, has produced five video games during her time at UT. This week, she talked to the Daily Texan about the message and inspiration behind her games.

The Daily Texan: What first got you interested in video game design?

Christina Curlee: There was a summer where I was going through a quarter-life crisis where I asked myself: What do I want to do? I wanted to affect people, so I said, okay, there’s arts. I explored painting; I explored sculpture. It just wasn’t powerful enough for me. So I had to think, ‘what would be the most powerful medium?’ It’s games [for me]. It’s putting a player into your world and having them interact within that to be in, literally, the shoes you make for them. So I decided that I was going to commit to this. I had to self-teach everything. It let me keep naiveté in my game-making that I actually wouldn’t want to lose because, as I learned from being in an arts program, there’s a naiveté when you’re not overthinking everything that brings a certain aura to your work. Same with games and self-teaching—your mistakes become your signature.

DT: What’s the difference between the effect of visual art and interactive media such as video games? What makes games powerful?

CC: Games are more like conceptual art in that you need the audience to finish your sentences. Even in movies, the audience can’t make the ending change. They have to sit there and take whatever is given to them. In games, you can build the world, the mechanics, the aesthetics, but ultimately [the player] is going to decide what occurs. It’s going to be different based on how they interact with the interface. I just can’t think of another medium that I can do that with, where I can work with space and time like that. Even in installation art, you can’t really predict the environment, you really have no control over it. In games, you have so much more control over the product.

DT: What has been the most rewarding thing about creating your own games? What is the most challenging aspect?

CC: The most rewarding is definitely when people get to play them. Especially when people who usually don’t play games enjoy themselves. All my games are PC gaming, which includes the most elitist group of people ever. And I’m just making these games that three-year-olds could play. There’s kind of a protest in that by opening this up to the normal player, to people who don’t consider themselves PC gamers. It opens up these ultra-privileged spaces to the masses. The hardest part is teaching myself. Everything you see in a game requires so much work. Every part of the world has to be built by hand. It takes endless reading through documents and tutorials. That’s rewarding too—putting in work and seeing a finished product. Even if no one likes it, you know how much work you put in to get there, and it’s self-rewarding.

DT: Tell me about a video game that you designed that you especially liked.

CC: My team project, Final Flight. It’s funny because I didn’t think I’d be into it. When my team and I sat down for the brainstorm session, I had originally wanted a super experimental game with weird mechanics. But the guys wanted a mech shooter game with robots and aliens. It was very ’80s inspired and nothing I ever thought I’d have to work on. It provided an extra challenge, and it was actually relieving for me not to have the design in my hands. We had a lot of voices coming together. It was funny because we were making a 3-D game, but with the aesthetics of an ’80s game. I was able to bring in elements of surrealism and just things that I like, and this was combining with my other teammates’ ideas, who really liked anime, so that went into the character. So you have anime in a surrealist environment with the programmers wanting an ’80s aesthetic. This all came together to make this really interesting game. I still look on it now and think, ‘this game is so beautiful.’ From the initial idea, you have a certain trope in mind that you think you’re going to see, and it’s nothing like that. It’s from all of us, from all of our team coming together to make that. It’s something I would never have been able to make on my own.

DT: What do you want to create or hope to accomplish through design in the future?

CC: “I want to get a lot better than I am. I’m still very much a beginner. I really want to build bigger games that reach much bigger audiences. I’d like to hit that territory more while keeping my artistic integrity. It’s not about selling out, it’s about knowing what I know, and being who I am, and reaching people who resonate with that. The game industry still needs a really big shake-up. Right now, it’s still a lot of people that think exactly alike making the exact same games over and over again. I’d like to be a part of shaking that up and introducing more voices, while being supportive of not just me, but more people that’d like to do that too. I’d also like to work with kids and teenagers and show them that they don’t just have to be consumers — they can be producers too.”