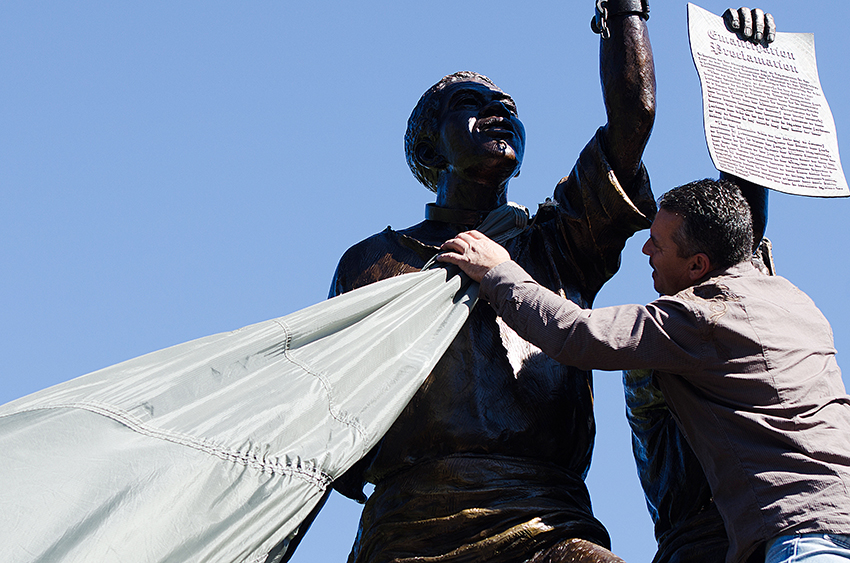 The Texas African American History Memorial was unveiled Saturday morning at the South Grounds of the Texas State Capitol, culminating a 20-year-long journey since the project was approved by the Texas Legislature.

The 10-foot bronze and granite monument was sculpted by black artist Ed Dwight in order to commemorate the history and contributions of Texas African-Americans. It is the last monument erected on the south Capitol grounds under current law, according to the event’s Facebook page. Hundreds of people gathered to witness the moment.

Texas Gov. Greg Abbott spoke at the ceremony and said the erecting of the monument was a “long time coming.”

“African-Americans have shaped this land that we are on today since long before it was even named the state of Texas,” Abbott said. “We cannot ignore the inhumanity of slavery and struggle, but we can celebrate the long path to freedom, from the Civil War to the Civil Rights Movements to this very day.”

The unveiling ceremony was hosted by the Texas African American History Memorial Foundation and the Texas Legislative Black Caucus, which have been committed to the construction and dedication of the monument.

Helen Giddings, Texas Legislative Black Caucus chair, read a congratulatory letter from former president George W. Bush. Bush praised the efforts of the key contributors to the monument and highlighted the significance of safeguarding the black legacy in Texas.

Abbott said the state can still do more to promote equal opportunity for all residents.

“Despite some successes along the way, we realize there is more work yet to be done,” Abbott said. “If we are to truly elevate our state to its limitless possibilities, we must continue to expand opportunity and liberty for absolutely everybody in the Lone Star State.”

“I think the memorial symbolizes the tremendous contributions African-Americans have had to the state and to the University of Texas,” Fenves said.

Cherise Lee, director of Innervisions Gospel Choir, performed the recessional songs with other students at the end of the ceremony.