Strong denies job rumors, will be evaluated after season ends 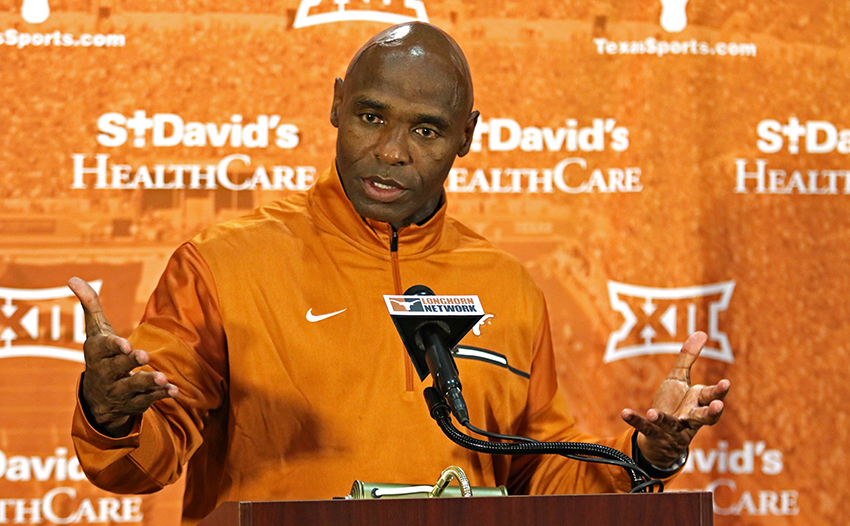 Charlie Strong denied reports of his dismissal from the program on Monday, telling the media he will coach Texas in its season finale against TCU on Friday.

“I’ve been told we will be evaluated at the end of the season,” Strong said. “After the last game against TCU, a decision will be made.”

Strong took the podium for his regularly-scheduled press conference in front of a significant media contingent as well as dozens of current players. The show of support from the Longhorn athletes continued following Strong’s press conference as they met with the media.

“You can’t ask for a better guy and a better coach,” senior defensive lineman Paul Boyette Jr. said regarding Strong. “He brings the best out in guys… When I’m blessed with kids I want them to play for coach Strong.”

Rather than decide on Strong’s status following Texas’ 24-21 loss to Kansas on Saturday, Texas’ administration decided to wait until the end of the year to either fire Strong or keep him on-board as head coach.

“There are a number of rumors out there about the status of Coach Strong,” Longhorn athletic director Mike Perrin said in a statement released on Sunday evening. “I’ve said it all along, we will evaluate the body of work after the regular season. We have a game to get ready for against TCU on Friday, and I hope our fans will come out and support our team. We’ll discuss where things stand after that.”

Perrin’s statement contradicts reports earlier in the week that the university had agreed to fire Strong. The Austin-American Statesman reported on Sunday that “University of Texas officials have decided to fire football coach Charlie Strong.”

But despite the reports, Strong said he is simply focused on coaching out the year and guiding the Longhorns to bowl eligibility. If Texas can beat TCU on Friday, it will become bowl eligible for the second time in Strong’s three-year tenure.

“I want to get these guys to a bowl game,” Strong said. “We just need to go get this one… We need this for our players.”

After denying reports of his imminent dismissal, Strong spent most of his scheduled Monday press conference assessing the current state of the program. While he sits at just 16–20 in his three seasons as the Longhorn leader — good for a .444 winning percentage, the worst in school history — Strong says he has seen significant improvement in his time on the 40 acres.

“The wins and losses, they don’t stack up,” Strong said. “But still you look at a young football team that has a lot of talent… We have built a foundation. The program is heading in the right direction.”

Strong noted the potential of the Longhorn roster on Monday. Texas boast a bevy of young talent on both sides of the ball, from freshman quarterback Shane Buechele to standout sophomore linebacker Malik Jefferson. The burnt orange notched the nation’s No. 10 recruiting class in 2015 and the No. 7 class in 2016, according to the 247Sports composite.

“This group is going to win a national championship,” Strong said. “I feel strongly about that.”

Strong is still unaware of his fate moving past 2016. But for now, he is still the Longhorns’ head coach – at least for one more game.