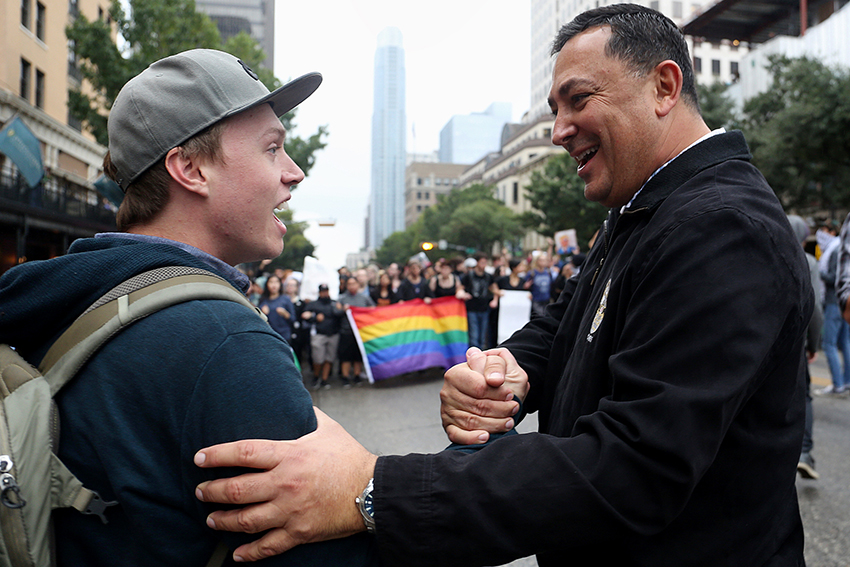 Acevedo said Friday in a press conference he had seen the city change a lot over the past decade and that the moment was bittersweet. As Acevedo fought through tears, police officers joined the chief at
the podium.

“It’s hard to say goodbye,” Acevedo said, his voice quivering. “I love my cops, and I love this community. They get mad at me, but I have to make a call.”

“I have every confidence in his ability to carry on the values of the city of Austin and this police department,” Hart said.

The state requires a legal process where the City Council must confirm Hart’s appointment. This meeting is scheduled for Dec. 1, the first effective date of his new position.

Manley said Acevedo was his friend and mentor and similarly called the moment bittersweet for him and the
police department.

“This comes as quite an honor,” Manley said. “Following a chief like Chief Acevedo is a daunting task.”

Manley, the first in his family to serve as a police officer, started with APD in 1991 and served various roles in the department, including being recently being promoted to assistant chief in 2012 and chief of staff in 2015, according to KXAN.

Manley called Acevedo one of the most progressive police leaders in the country right now and said he has learned a lot from him.

“I’m not going to be Art Acevedo,” Manley said with a smile. “I can’t be Art Acevedo. I don’t think anybody can even with medication.”

Manley said he hopes to continue building on Acevedo’s commitment to social justice.

“Although Chief Acevedo is leaving, his vision remains,” Manley said. “Transparency is a cornerstone of what we do here, and we are going to continue that.”

Manley said although he can’t match Acevedo’s personality, he can match his passion for the job.

“I am committed to the city management staff here that has placed faith in me to take on this role to not fail, to give this 100 percent, and to continue this department going in the direction it needs to go in,” Manley said.