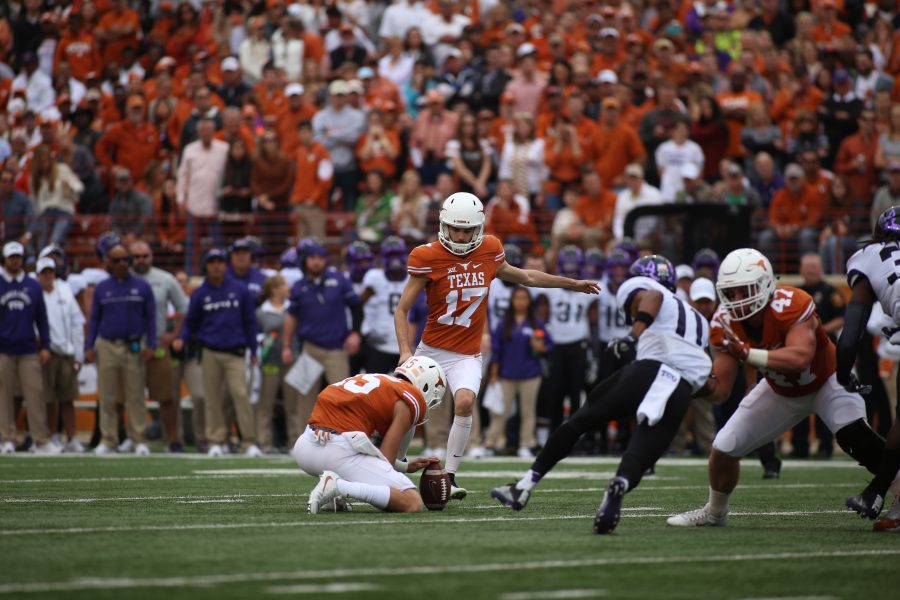 But it didn’t end the same way for TCU. Instead of finding the end zone, the Texas defense hung tough and kept the Frogs out. TCU settled for a field goal to extend its lead to 10-6.

The Texas offense answered. Running back D’Onta Foreman broke off a 44-yard rush depp into TCU territory. The gash put the junior over 2,000 yards rushing on the season, becoming the first Texas player since Ricky Williams in 1998 to reach the feat.

Freshman quarterback Shane Buechele and the Longhorns couldn’t capitalize, going three-and-out from there to settle for a field goal of their own. Junior Mitchell Becker’s kick held true, bringing Texas back to within one point of the Horned Frogs.

The tight margin wouldn’t last long. TCU scored in less than two minutes on a 41-yard rushing touchdown by Hill. The run brought him up to 69 yards rushing and two touchdowns on the ground on the day to that point.

Meanwhile the Texas offense continued to struggle. After the made field goal on its first possession of the second half, the Longhorns proceeded to punt four straight times. They manufactured a mere 43 yards on those four drives.

But the TCU offense found another groove early in the fourth quarter. With Hill sidelined with an injury, TCU trotted out sophomore quarterback Foster Sawyer. He entered the game with his back pinned against his own goal line at the three yard line.

It didn’t matter. He led his team 97 yards down the field in just under four minutes. His lone pass on the drive was a 28-yard completion. Trevorris Johnson finished it off from there with a five-yard touchdown rush to put TCU ahead 24-9.

Texas went three-and-out on its next possession, but TCU didn’t. Freshman running back Darius Anderson took an outside handoff to the left edge and left every Texas defender in his wake en route to a 70-yard touchdown.

The score all but put an end to both the game and likely Charlie Strong’s tenure as the head coach at Texas as TCU raced out to a 31-9 lead with 7:32 remaining.

That ended up being the final score as Texas remained unable to find the end zone all night in a 22-point blowout.

Halftime update (4:18 p.m.): Texas won the coin toss and head coach Charlie Strong elected to receive. With his job on the line, the third-year skipper wanted his offense to get on the board quickly to alleviate some of the pressure facing his defense.

That didn’t happen. The Horned Frogs forced Texas to punt after a seven-play, 21-yard drive. Then the TCU offense went to work.

TCU junior quarterback Kenny Hill was flawless on his first drive of the game, generating a eight-play, 75-yard scoring drive to get his team on the board first. Hill capped the possession off with a four-yard touchdown run after going 6-of-6 for over 60 yards passing on the drive.

Freshman quarterback Shane Buechele answered with a perfect pass of his own. He found freshman receiver Devin Duvernay down the sideline for a 48-yard gain to the TCU 11-yard line.

But the Texas offense sputtered from there, having to settle for a 21-yard field goal attempt from senior kicker Trent Domingue. He knocked it through to inch Texas closer.

The Horned Frogs’ next four possessions were a polar opposite from their first. TCU lost a total of 16 yards on those drives, having to punt on all four of them.

The Texas offense couldn’t muster much momentum for itself, either. Its next four possessions following the made field goal consisted of two turnovers on downs and a missed 38-yard field goal attempt by Domingue.

On its fifth drive after scoring its only points of the half to that point, junior running back D’Onta Foreman found his stride. He went over 90 yards on the day on the drive, but he couldn’t get the yard that mattered most.

The TCU defense stymied him at the goal line to keep Texas out of the end zone. Hill, though, threw an interception on the Horned Frogs’ ensuing possession. Junior safety DeShon Elliott set his offense up inside the TCU 10-yard line.

Yet once again, the Longhorn offensive unit didn’t come through. Texas settled for another field goal, this time a made attempt by junior Mitchell Becker taking the place of the benched Domingue.

The kick pulled Texas to within one, 7–6, and that’s where the two teams went to halftime.

Original story: Texas (5–6, 3–5 Big 12) will attempt to qualify for a bowl game on Friday as it faces off against TCU. The Longhorns are reeling off a 24-21 loss to Kansas last week, a defeat that proceeded a flurry of rumors regarding head coach Charlie Strong's job security.

But while there is still significant uncertainty on that front, Texas is guaranteed to continue its season into December with a win over the Horned Frogs.