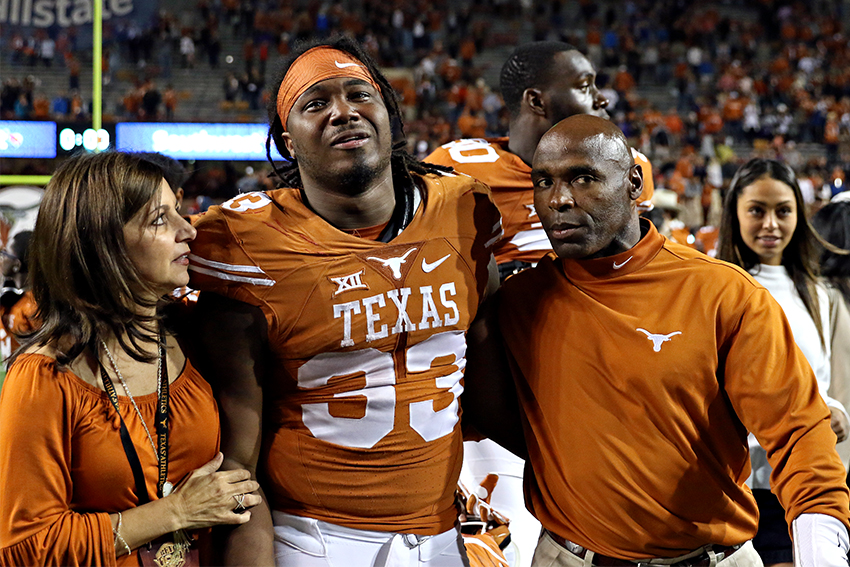 Less than half the crowd remained at Darrell K Royal Texas-Memorial Stadium on Friday as the clock hit zero and head coach Charlie Strong trotted into the locker room following Texas' 33-9 loss to TCU.

“The Eyes of Texas” blared from the north side of the endzone, playing the burnt orange off to their third losing season in a row. Many Longhorns exited the field despondent, seemingly unaware of how a season once so promising could end in such disappointment. And even on the day he eclipsed the 2,000-yard mark, junior running back D’Onta Foreman crouched at the south goal line with his head in his hands.

“I was kneeling, I cried,” Foreman said. “Every step I’ve taken I’ve given my all. To come up short in a game like this, it’s very emotional.”

Three years and 37 games after he was hired, Strong approached the podium postgame trying to keep things positive.

“I told our players I look forward to coming back,” Strong said. “The foundation has been laid here. We’ve been building it for three years.”

Strong’s tenure looked to be over last week following Texas’ 24-21 loss to Kansas and reports of his dismissal a day later. But athletic director Mike Perrin sent out a statement the next day refuting those reports, starting a circus surrounding the program. Dozens of Texas players showed up in support of Strong at Monday’s press conference and discussed the matter with him throughout the week.

“It’s tough [for the players] to focus when so much has been thrown at them,” Strong said. “You just never knew where their minds were. You’re trying to keep them locked in.”

But the support from Texas’ players didn’t result in on-field success against the Horned Frogs. Texas’ defense remained stout following an early touchdown, but its offensive attack was defined by a slew of missed opportunities.

Senior kicker Trent Domingue missed a 38-yard field goal, and the Longhorns were denied the goal line on four plays within the Horned Frogs’ 5-yard line. At the half, Texas trailed, 7-6 despite out-gaining TCU 254-102.

Texas’ offense once again hinged on Foreman’s legs. The Texas City product carried the load for the Longhorns, totaling 165 yards on the day. He finished the season at 2,028 yards, good for second all-time by a Longhorn player in a single season. Heisman Trophy winner Ricky Williams still holds the school record after running for 2,124 yards in 1998.

Despite Foreman’s efforts, the Longhorn defense couldn’t keep up in the second half. TCU signal caller Kenny Hill sprinted into the endzone from 44 yards out early in the third quarter, and a pair of Horned Frogs iced the game with two touchdown runs in the fourth.

By the game’s final whistle, the Horned Frogs ended the burnt orange’s season with a 22-point victory.

Texas’ players pined for Strong following the defeat, echoing their statements from a week prior. They championed the virtues Strong taught them and the impact he had on their lives.

“He’s has made us better men,” senior linebacker Tim Cole said. “He made us want to be better, work hard and never get complacent. … He taught me to how be accountable and handle adversity.”

Strong said he will meet with Texas administrators on Saturday to discuss his future, which now looks murky at best. He was reflective in his postgame statements, looking back at the team's successes and failures over the past three years.

Strong succeeded in his latter goal by all indications. But a 16–21 record over three years isn’t close to attaining that vaunted national championship. And now, it may not be good enough to keep his job.