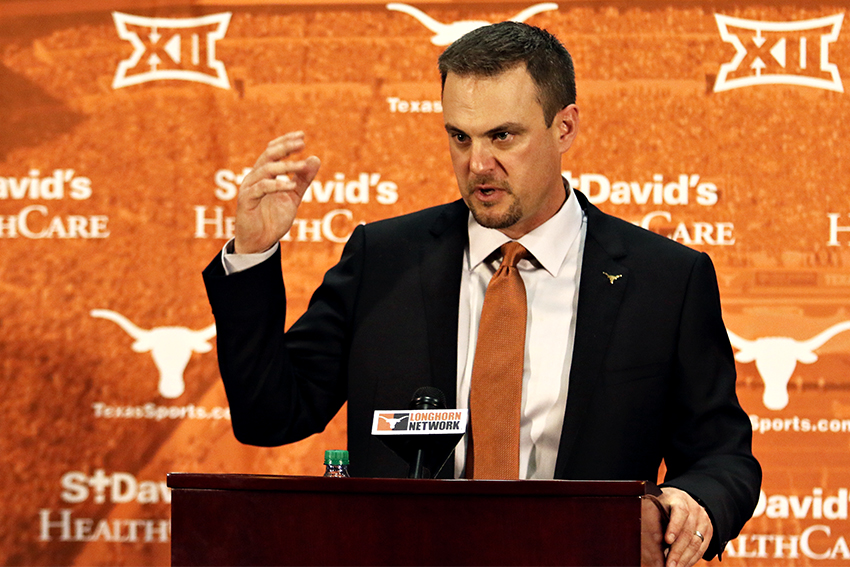 Tom Herman didn’t need much of an introduction Sunday as he took the podium at Darrell K Royal-Texas Memorial Stadium.

Herman has been a known commodity on the 40 Acres since 2014, when former head coach Charlie Strong reportedly pursued Herman for the Longhorns’ offensive coordinator job. And after two successful seasons and a 22–4 record at Houston, Herman quickly became the Longhorns’ top choice to become the 30th head coach in program history following Strong’s dismissal on Saturday.

“[Herman] is the real deal, the right choice and a great choice for Texas,” athletic director Mike Perrin said. “I have no doubt that he will bring championships to Austin.”

Texas’ administration quickly pinpointed Herman to lead the program, hiring him just hours after firing Strong on Saturday morning. And while neither Perrin nor University President Greg Fenves confirmed he was the only candidate interviewed, they did state he was “a clear top choice” after speaking with him on Saturday.

Herman’s ties to Texas date back more than a decade. He began his journey as a wide receivers coach at Texas Lutheran in 1998 before taking a graduate assistant gig at Texas a year later. One of his first duties with the program was to sit with Heisman Trophy-winning running back Ricky Williams on a parade float, where he learned the “Hook ‘em Horns” hand sign.

His time as a graduate assistant was short-lived. But in the two years he spent with Texas, Herman said he learned a great deal from former head coach Mack Brown, who was in attendance for Herman’s introduction on Sunday.

“The thing I credit coach Brown for the most is his inclusivity,” Herman said. “He’s got an unbelievable way of coaching people and managing people. And just sitting in that staff room for two years, it was very eye-opening.”

Herman detailed his coaching philosophy as well as his goals for Texas at Sunday's press conference. He stressed building relationships with his players and the necessity of proper preparation.

The 41-year-old coach preached the “practice of alignment” as one of his main coaching principles. Taking note from Ohio State head coach Urban Meyer – who Herman worked for as the Buckeyes' offensive coordinator from 2012–14 – Herman said the Longhorn staff will work to send a disciplined and consistent message to its players on and off the field.

While Strong entered the program in 2014 with little experience recruiting in Texas, that won’t be a problem for Herman. The Ohio native spent time as an assistant at Sam Houston State, Texas State and Rice before joining Iowa State in 2009, canvassing the state on the recruiting trail.

Herman spoke like a tried-and-true Texan when discussing recruiting. He took time to name-drop numerous Texas high schools, displaying his deep understanding of the state's geography and football tradition.

“I’ve recruited this state for 20-some-odd years,” Herman said. “I’ve grown up with the high school football coaches in this great state. … It doesn’t get any better than this. It’s not even close anywhere in the country.”

Texas football is undoubtedly a pressure cooker, drawing constant attention throughout the nation. And while Herman has head-coaching experience at Houston, the scrutiny that comes with leading the Longhorns dwarfs that of coaching the Cougars.

But Herman insists he isn’t concerned with the pressure. He said he’s ready to guide the Longhorns and bring them back to the top of the college football landscape.

“Now we are home, and I can’t wait to get started,” Herman said. “The University of Texas is a special place and deservedly holds a seat among college football elite. … We will win championships, we will build men of character, we will graduate our players, and we will do it with integrity and class.”