UT researchers analyze landforms on Mars that may have hosted life 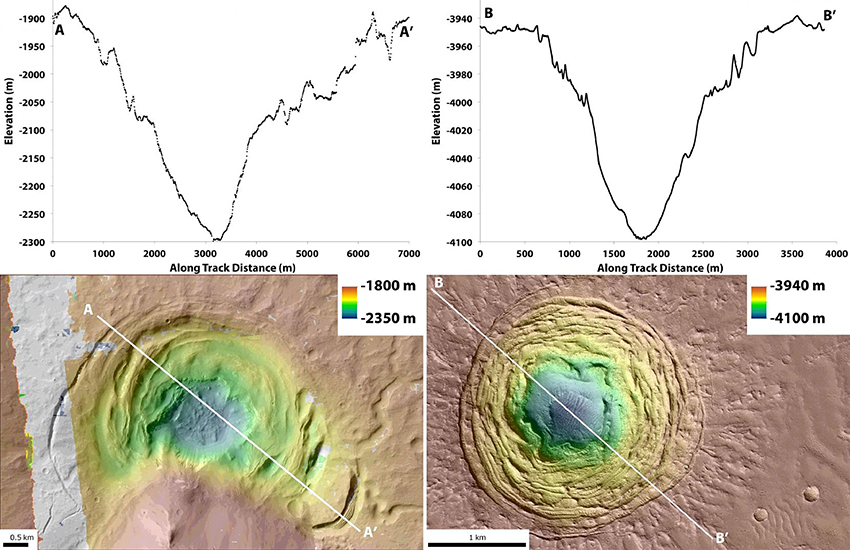 Unique depressions on Mars could be new places to look for signs of life, according to a new study published this month in Icarus, the International Journal of Solar System Studies. The study was led by researchers in the Jackson School of Geosciences.

Joseph Levy, a research associate at the University of Texas Institute for Geophysics and the study’s lead author, found two depressions on the red planet’s surface with potential to host water, nutrients and heat — a likely environment to sustain life. These depressions resemble Earth’s “ice cauldrons,” or formations created by volcanoes erupting under sheets of ice.

“First we set about to see if the materials [on the edges of the depression] were mostly ice, or ice-related,” Levy said in an email. “This involved looking for landscape features that are indicative of glacial processes on Mars.”

The team studied two regions of Mars, the Hellas Basin and the Galaxias Fossae region, focusing specifically on how these regions were formed.

“In the end, we had to rely on the morphology (landform structure) of the features to arrive at a preferred interpretation,” Levy said in an email. “The lack of ejecta and other crater-related landforms around the North Hellas depression suggests that it was volcanic, rather than impact, while the Galaxias depression has ejecta and is a strewn field of similar looking depressions that is most consistent with a swarm of meteorite impacts.”

The researchers were only able to analyze the morphology with such accuracy through the use of new and advanced camera and imaging technology.

“This study was a fun chance to use new high-resolution camera data in a clever way to build stereo elevation models,” Levy said in an email. “Getting to ‘peer inside’ these depressions for the first time was really a treat — almost as good as being there!”

Tim Goudge, a postdoctoral fellow at the Institute for Geophysics, also contributed to the study. Goudge used the images of the depressions for his research contribution.

“My primary role for this project was producing the topographic data — digital elevation models, or DEMs — from high-resolution stereo images‎ of the Martian surface,” Goudge said in an email. “These data allowed us to readily quantify the 3D geometry of the studied depressions, which proved critical for testing the competing hypotheses for their formation mechanism.”

“The identification of a potential site of volcanic-ice interaction is very interesting,” Goudge said in an email. “This could have provided a source for very recent meltwater, which is thought to be scarce over the past about 3 billion years of Mars history.”

Gro Pedersen, a volcanologist at the University of Iceland, wasn’t involved with the study but told UT News how important and interesting these sites can be for continuing Mars research.

“These features do really resemble ice cauldrons known from Earth, and just from that perspective they should be of great interest,” Pedersen said in the article. “Both because their existence may provide information on the properties of subsurface material — the potential existence of ice — and because of the potential for revealing ice-volcano interactions.”

Levy said he is optimistic about the future use of the research in missions to Mars.

“This study helps build the case that there are many different kinds of habitable environments on Mars where, in the past, life could have found a refuge from the cold, dry martian surface environment,” Levy said in an email. “Hopefully it will be used to help target future missions designed to hunt for traces of past Martian life.”