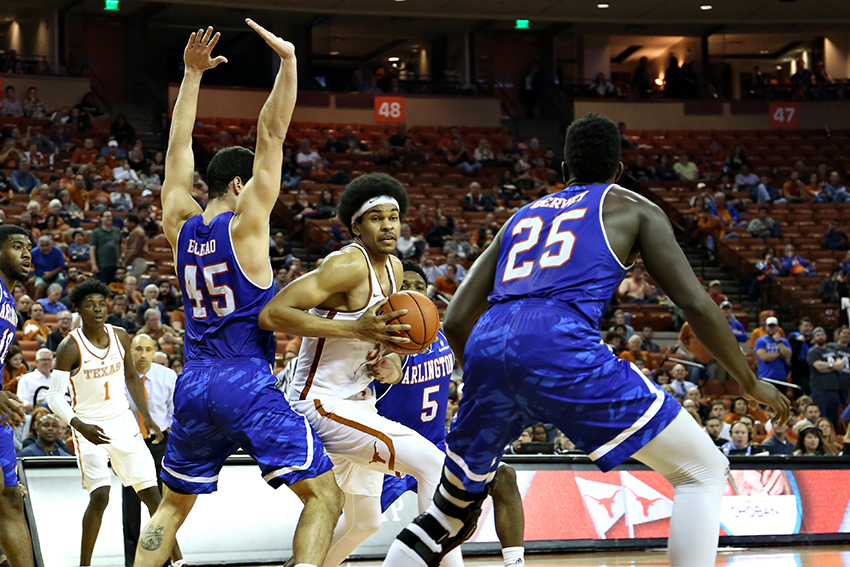 Texas got off to an explosive start Tuesday against UT-Arlington, scoring the game’s first bucket on a breakaway dunk by sophomore guard Kerwin Roach Jr.

But any momentum from the Longhorns’ emphatic start quickly dissipated. The team dropped its third-straight game to the Mavericks, falling 72–61. Texas had previously been 11–0 against UT-Arlington.

The Longhorns once again succumbed to the poor shooting that plagued the team in last week’s Legends Classic. In their two games in Brooklyn, New York, Texas shot a combined 37 percent from the field and 26 percent from behind the arc.

Roach, who finished the game with 16 points, said he was happy with the shots the team was getting and said the team needs to convert from the outside when given
an opportunity.

“There wasn’t too many situations where it was late in the clock,” Roach said. “We were 3–23 from three, and most of them were wide open shots. We just got to live in the gym the next couple days and get our shots right.”

In the first half, it appeared that the Longhorns could capture a victory despite their shooting struggles. Texas controlled the game for much of the frame and built a nine-point lead with seven minutes remaining until halftime.

But the Mavericks went on a 20–8 run to a capture a 30–27 lead going into the break. Unlike the Longhorns, the team recovered from a slow shooting start. UT Arlington shot 6–10 from the field in the half’s last seven minutes and drained two three pointers after missing its first 10 from deep.

The Mavericks would continue their hot shooting into the second half, draining three threes in the half’s opening two minutes to open up a nine-point lead. The team would coast from that point out, at one point going up by 16.

Texas struggled on the boards while getting outrebounded 40–35 by a scrappy Arlington team hot pursuit of every loose ball. Head coach Shaka Smart said the Mavericks played with more aggressiveness and he needs his players to match that intensity.

“When things like that happen, you kind of look at each other, and you need a guy or two to step up and say this is not going to happen,” Smart said.

Freshman Jarrett Allen was one of the few bright spots for the Longhorns. The forward carried the team in the first half, pulling down 11 rebounds and notching eight points. Allen would finish the game with 13 points and 12 rebounds, good for his second career double-double.

Going forward, Smart said the Longhorn’s issues on offense must be addressed and the team needs to find an identity.

“We just need to increase the percentage of great-shot possessions,” Smart said. “Now how do we do that? Number one is to value the ball more. When you don’t get a shot at all, you have no chance to score. Number two, we need to make that extra pass more.”

The Longhorns will look to snap their three-game skid this Friday when they take on Alabama at the Frank Erwin Center at 8:30 p.m.