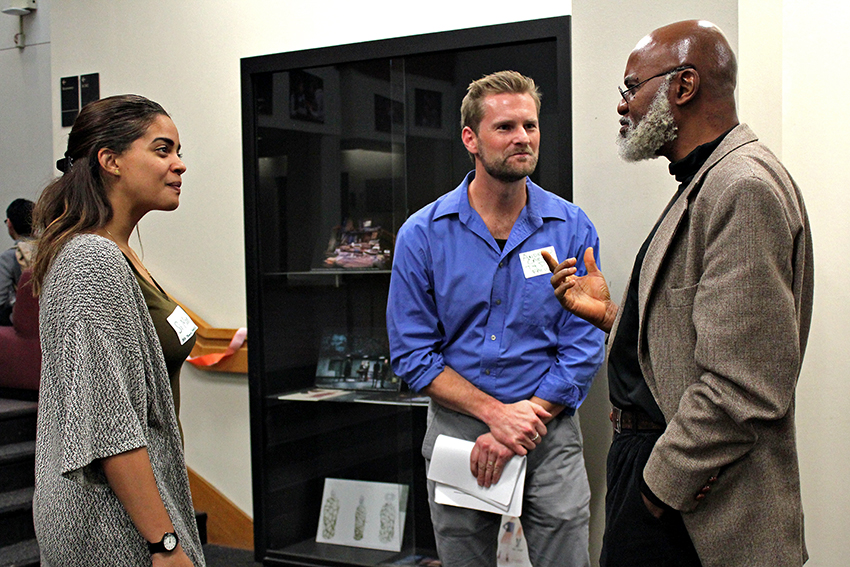 Students and faculty celebrated the beginning of a long-awaited organization for students of color in theatre and dance at a launch party Wednesday afternoon in the F. Loren Winship Drama Building.

After about a year of brainstorming, Andrew Aaron Valdez, theatre studies and biology senior, and theatre studies senior Si Mon’ Emmett brought their idea to fruition by creating the Students of Color Organization for Performance and Engagement.

“I think it’s more of like just a gathering place … for us to come and interchange our ideas, our ideals and also more than anything, our art,” Valdez said.

Emmett said SCOPE will provide a safe space for these students to talk, network with professionals and eventually showcase their art. Members said they hope to expand the organization to other fine arts majors as well.

“Especially at a school as big as UT, you kind of lose touch of where your people [are],” Emmett said. “It’s easy to get lost in such a large university.”

Carlson said he has heard students and faculty express for a while the need for such an organization for students of color to share their experiences concerning cultural differences.

“I’ve been talking to students for the five years that I’ve been here,” Carlson said. “I’m just really grateful that it’s happening now.”

Kilgore, who graduated from UT in 2015 with a degree in dance and theatre, said he felt out of place concerning casting as a black male.

Kilgore said the department has changed its attitude toward their students and how the programs will include them.

“There were some faculty members who wouldn’t speak to us raising questions [about diversity],” Kilgore said. “The fact that they [now] have a mission statement on diversity and inclusion is leaps and bounds beyond what it was when I was a student.”

The focus is on students of color, but Emmett said there may be a few meetings which include white allies.

“We don’t want to be exclusive at all because it’s not, but we do have times where it will just be students of color,” Emmett said.

J.J. Cortez, a theatre and dance sophomore, said he sometimes felt unsure if he was denied or accepted a role for a show because of the color of his skin and said he was glad such a group can allow him to express that feeling.

“I know it’s not looked at like that, but I feel like when I audition for a role, am I not going to get it because of my skin color or do I get called back because of my skin color?” Cortez said. “That being said, I think it’s super important to have an organization that represents us and to have our work shown and performed, because we have a voice too.”