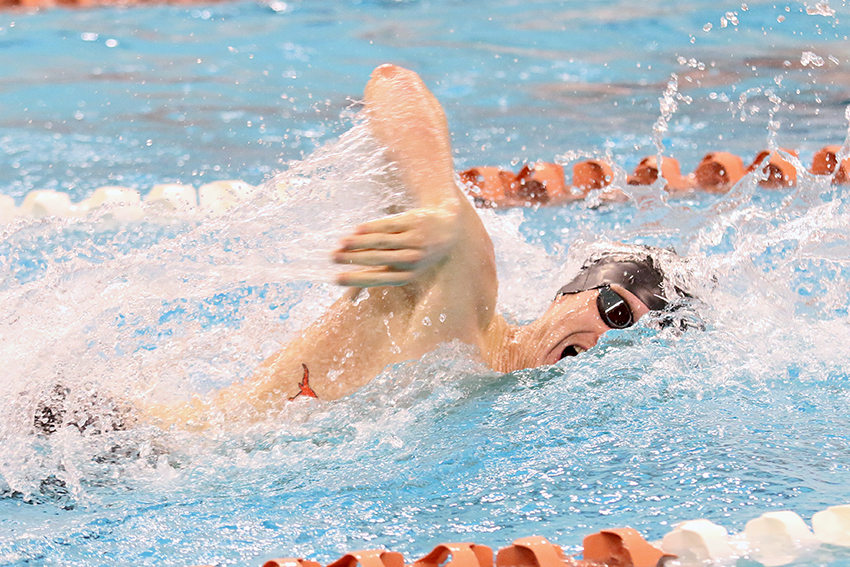 Texas’ men’s and women’s swimming teams competed in the first day of the Texas invitational Wednesday, with the men taking third place and the women finishing first in the 800 freestyle relays.

The Lee and Joe Jamail Texas Swimming Center was packed with fans from all over the country, spanning from California to Massachusetts.

The reserve rally team featured freshman Jacob Huerta, junior Jonathan Roberts, and seniors Will Licon and Clark Smith. They finished seventh with a time of 6:25.72.

The women’s team fared better than its male counterparts on day one of the Invitational. The burnt orange won the 800 yard freestyle relay by five seconds and took down the school record by nearly a full two seconds.

“I’ve been waiting a long time to put the right people together to make that happen,” head coach Carol Capitani said. “That event has changed since it’s the first event of the NCAA Championships and it can set the tone for that week. It was a lot of fun, and they earned that school record.”

Freshman Claire Adams nearly bested Cox and put the Longhorns in great position to win in the third leg. Senior Tasija Karosas anchored the relay with a split of 1:43:54, giving the Longhorns a comfortable victory.

With the first event of the Invitational now out of the way, the Longhorns now look toward day two of the tournament on Thursday. The preliminary round begins at 10 a.m. with the finals beginning at 6 p.m.