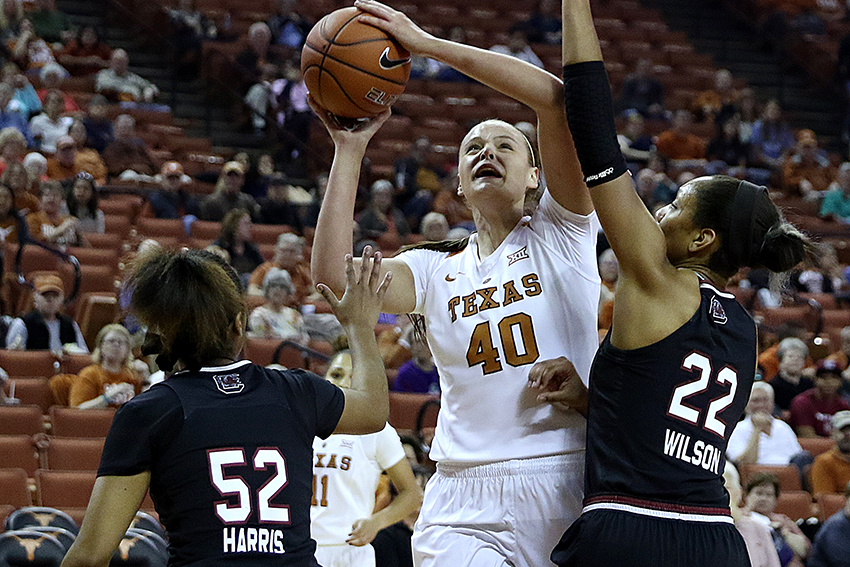 Fouls plagued the Longhorns once again Thursday night. The No. 14 Longhorns fought until the very end but ultimately fell to No. 3 South Carolina, 76-67.

The loss marks Texas’ third defeat against a top-15 team this season and first at the Frank Erwin Center. The Longhorns out-rebounded the Gamecocks, 40-37, and played with more aggressiveness on the defensive end, but their season-high 29 fouls were too great a toll to overcome.

Six Longhorns finished the night with three or more fouls, giving the Gamecocks 30 points off of free throws. Moving forward, senior center Kelsey Lang said the team needs to work on boxing out without fouling.

“We are so capable of doing that,” Lang said. “We just need to focus on that in practice.”

Foul trouble was also an issue for South Carolina’s leading scorer on the season, senior center Alaina Coates. Coates only saw five minutes of play in the first half after committing two early fouls that put her on the bench. Coming into the game, Coates led the Gamecocks with 16.6 points per game and 12.8 rebounds per game. Texas held her to six points and seven rebounds on the night.

But the Longhorns couldn’t stop junior forward A’ja Wilson. She made her presence known on the court early and often, gliding to the bucket for a career-high 31 points. Wilson carried the load for South Carolina on both ends of the court as she snagged 12 rebounds, four blocks and three steals.

The game wasn’t as lopsided as Texas’ previous losses to then-No. 11 Stanford and then-No. 10 Mississippi State. Head coach Karen Aston said although the loss is disappointing, she saw legitimate improvement from her young team.

“I really thought they did a great job preparing,” Aston said. “We’ve grown in one week.”

The Longhorns gained an early lead in the first quarter, sparked by Lang’s aggressiveness in the post. Despite a 33-30 deficit at the half, Lang and freshman forward Joyner Holmes got the ball rolling for Texas in the second half. A couple of stops and some quick shots tied the game at 42 apiece halfway through the third.

But every time the Longhorns made a push, the Gamecocks struck right back. South Carolina reclaimed the lead entering the final quarter and never looked back.

Aston said these are the kind of teams the Longhorns need to play in order to get a sense of what it will take to win down the stretch.

“That’s what this schedule is all about,” Aston said. “Somewhere down the line, this is gonna be a great learning tool for this team, and it doesn’t seem fun right now, but hard is not fun.”

Texas will hit the road to take on No. 2 Connecticut, the reigning national champions, on Sunday at 3 p.m.