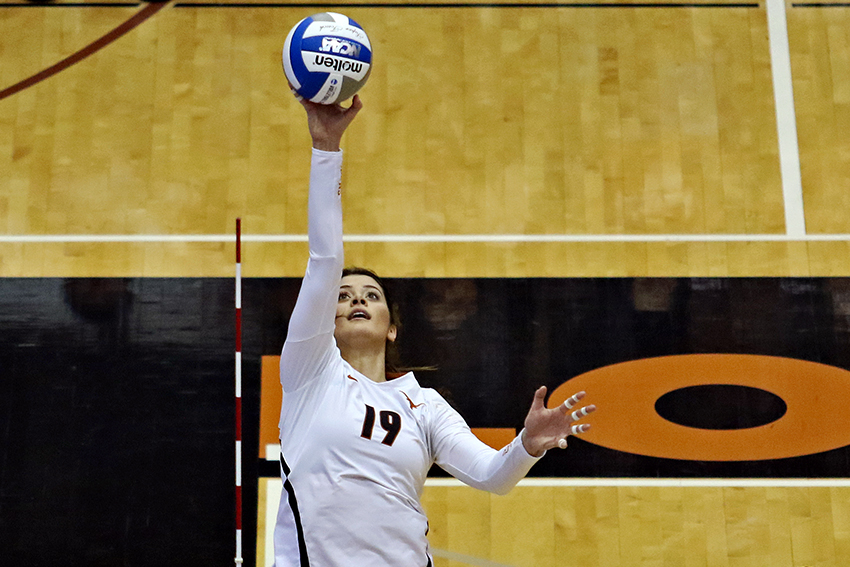 Packed grandstands and an uproar of the crowd can only mean one thing at Gregory Gym in December — it’s tournament time.

Texas kicked off its opening game of the 2016 NCAA Volleyball Championship in Austin on Friday night. The Longhorns cruised to dominant 3–0 victory over UT-Rio Grande Valley to advance to the second round.

“We did a nice job staying steady the whole night and playing consistently,” Texas head coach Jerritt Elliott said. “This is the NCAA Tournament. The key to this is to be able to concentrate the entire time.”

The Vaqueros traveled about 275 miles to Austin, but were unable to claim a set in the decisive victory. Texas won each set by at least nine points, leading for nearly the entirety of the contest.

The Longhorns brought the energy to start the tournament season, never trailing in the first set. Elliott’s program established early superiority defensively, doubling the Vaqueros dig total 18–9 in the opening set. After a 7-7 tie, the Longhorns quickly rattled off six unanswered points to control the frame. Texas emerged victorious at the one-third mark of the match, with a 25–14 advantage.

Senior setter Chloe Collins, who graduates from the University on Saturday, proved vital as both a server and setter in the set, winning six serves and posting 11 assists. She finished the match with 36 assists and nine digs.

“I thought we were just really steady the entire match,” Collins said. “We maintained our composure and with the momentum, we kept it.”

Texas continued to bring the firepower in the second set. The Longhorns’ clear height advantage over the Vaqueros formed a wall at the net defensively. Offensively, Collins consistently found open looks for the Texas pins, who were able to capitalize with impressive hitting ability. The speed and angles on the spikes were too much for UT-Rio Grande Valley to handle, and Texas earned a 25-16 victory with one set remaining.

“They’re pretty big and offensive,” Vaqueros senior outside hitter Alisha Johnson said. “We tried to stay disciplined and focused, but they’re a solid team, and there’s no doubt about that.”

Sophomore middle blocker Yaazie Bedart-Ghani played a big role for the Longhorns in the match. She led the team in kills with 13 efficient kills, accumulating a hitting percentage of .929. Bedart-Ghani also added two blocks, playing a large role in many aspects of the game.

“Chloe was putting up really great balls for me tonight,” Bedart-Ghani said. “We were just connecting really well and we just got into a really nice groove.”

Texas pulled ahead once more in the third set, constructing a 5-0 run after trailing 3-2 early. The Vaqueros pushed the burnt orange, but the Longhorns’ powerful kills distanced proved too much. Texas won the set, 25-17 extending the tournament run to the second round for the 12th-consecutive year.

“We wanted them to have to earn everything they got and we didn’t want to give away a lot of points to them,” UTRGV head coach Todd Lowery said after his first tournament experience. “It’s a big thing for this program to start to build that history.”

The Longhorns will test their abilities against another in-state foe — the SMU Mustangs of the American Athletic Conference. SMU swept Texas A&M at Gregory Gym several hours before the start of the Longhorns’ tournament-opener. Texas and SMU begin play at 7 p.m. on Saturday.