No. 4 Texas set to play No. 1 Nebraska in NCAA semifinals 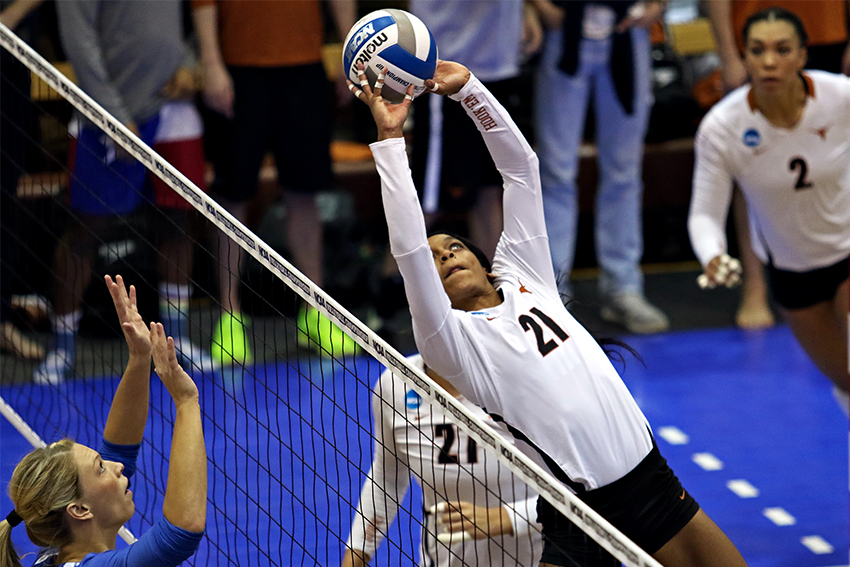 No matter how many times Texas makes the Final Four, the Longhorns say the feeling never gets stale.

The team takes on No. 1 Nebraska in the NCAA semifinals Thursday at 8:30 p.m. in Columbus, Ohio, marking the Longhorn seniors’ fifth-straight trip to the Final Four. Senior setter Nicole Dalton, who’s been in the program for all five years after after a medical redshirt season, said she’s ecstatic to get another chance to reel in a title.

“I look back on my freshman year and talking to Molly [McCage] in our dorm room saying we're going to the Final Four,” Dalton said. “So it's kind of like shock your freshman year like, we made it, we're going. It’s amazing. It never gets old. I couldn't be more happy right now.”

Although the Final Four is familiar, the Longhorns experienced a lot of ups and downs this season. They struggled at the beginning of the season with losses to No. 1 Nebraska and No. 3 Wisconsin. But they picked up several signature wins, including a rivalry victory over No.16 Texas A&M.

“Yeah, it's been a crazy year: lot of ups and downs,” Prieto Cerame said. “But I'm really glad that I'm doing this with these girls and [head coach] Jerritt [Elliott], and the rest of the staff. And we're just really excited to be back in the Final Four again.”

Still, the Longhorns are confident they’re an improved group since their losses to ranked teams early in the year.

“When we played them [Nebraska] in August, we were just like an amateur team,” senior setter Chloe Collins said. “We were really young and we didn’t have any team chemistry. It was probably one of the most devastating matches.”

Even the Big 12 proved to be more competitive than ever. Texas fought through many four or five-set matches and ultimately come up short of the Big 12 title for the first time in six years.

“This year has not been easy for us,” Collins said. “Throughout the whole entire conference we went through more five-set matches than I can imagine. We never really swept anyone, all games were two-point games. We never really found that rhythm and that rhyme.”

It wasn’t until a loss to Iowa State on Nov. 12 that the Longhorns figured out the right changes to make. They started picking up the pace on defense, culminating in a late-season push, including wins over BYU and Creighton in the Sweet 16 and Elite 8 rounds of the tournament.

“In our program if you don’t make the Final Four it’s a little disappointing,” Elliott said. “There’s always the pressure on the seniors. They don’t want to be known as the seniors that didn’t get our team there.”

A win over Nebraska would earn the Longhorns a spot in the National Championship game on Saturday. Texas made the title game last year, but lost to these same Cornhuskers in three sets. The team hopes to use its past experience against the Cornhuskers to end its two-game losing streak in the series.

“We don’t have to be perfect,” Elliott said. “This is not a game that we say ‘Oh we’ve got to play the best match of our season.’ We’ve got to be good and over a period of time the NCAA tournament is just finding a way to win. Sometimes you’ve got to win ugly sometimes the win’s really smooth.”