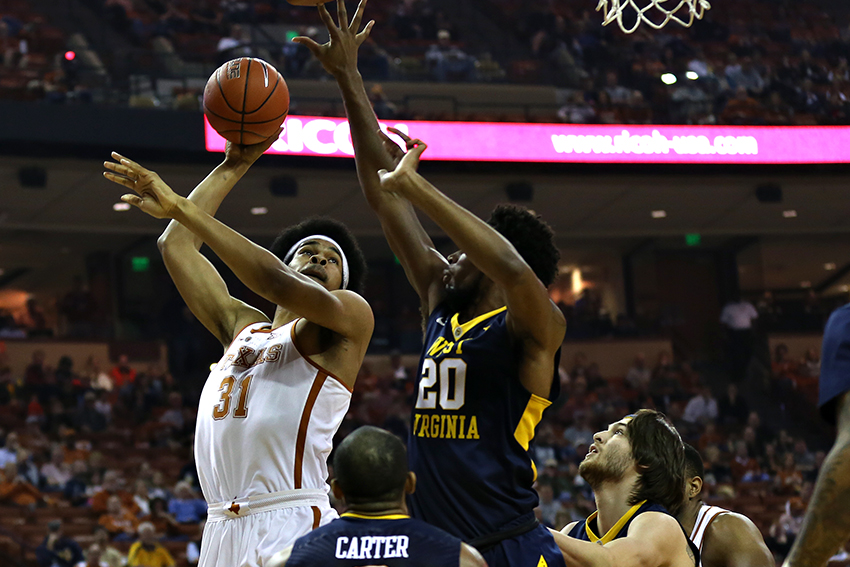 The opportunity to close out another nail-biting game was there again for the Longhorns.

With 5:56 to play on Saturday afternoon at the Frank Erwin Center, Texas and No. 10 West Virginia stood at a 60-60 impasse.

But West Virginia junior guard Jevon Carter had other ideas. Carter scored nine of his 15 points over the final 5:56 to help down the Longhorns, 74-72. It’s the fifth loss by three or fewer points this season for Texas (7–10, 1–4 Big 12).

“Jevon Carter — if you had to point to one guy that was a difference maker — it was him as he made big time plays and finishes,” head coach Shaka Smart said. “He was the guy that imposed his will more than anybody else upon the game.”

Before the game even started Texas knew it had its hands full.

Senior guard Kendal Yancy missed his fourth straight game with a high ankle sprain. Sophomore guard and leading scorer Tevin Mack was also out after being suspended indefinitely on Thursday for a violation of team rules.

Smart had to get creative to respond to the Mountaineers’ in-your-face, full court press attack.

Sophomore guard Eric Davis Jr. started for Mack. Freshman guard Jacob Young was inserted in the starting lineup for the first time all season. Graduate transfer forward Mareik Isom even made his debut for the first time this season.

“I just thought it was going to be really interesting to see how our guys responded and just where our team is,” Smart said. “I thought our guys showed a great deal of fight.”

A three by freshman guard Andrew Jones gave the Longhorns a 21-14 lead — their largest of the game — with 7:50 to play before halftime. Jones finished the game with 17 points and made 4-9 threes.

But the Mountaineers would turn up the pressure and take a 39-34 lead into the half.

“I think there were a couple of key stretches, probably late in the first half, where we lost a level of poise and didn't handle things as well as we needed to,” Smart said.

But the Mountaineers answered back with a 7-0 run in 50 seconds to take a 54-53 lead before Texas could even attempt at putting a stranglehold on the game.

Down 72-68 late, senior forward Shaquille Cleare scored on a finger roll to cut the deficit to 72-70 with 26.5 seconds remaining. On the ensuing possession for West Virginia, Carter was fouled and hit both free throws. A missed three by Roach on the other end helped seal Texas’ fate.

The schedule for the Longhorns coming up is brutal as they travel to face No. 1 Baylor on Tuesday and No. 2 Kansas next Saturday. The Longhorns are desperate to find any momentum.

“As a team, we can feel each other pulling closer for each other and playing more as a team,” freshman forward Jarrett Allen said. “The only way is up for us.”