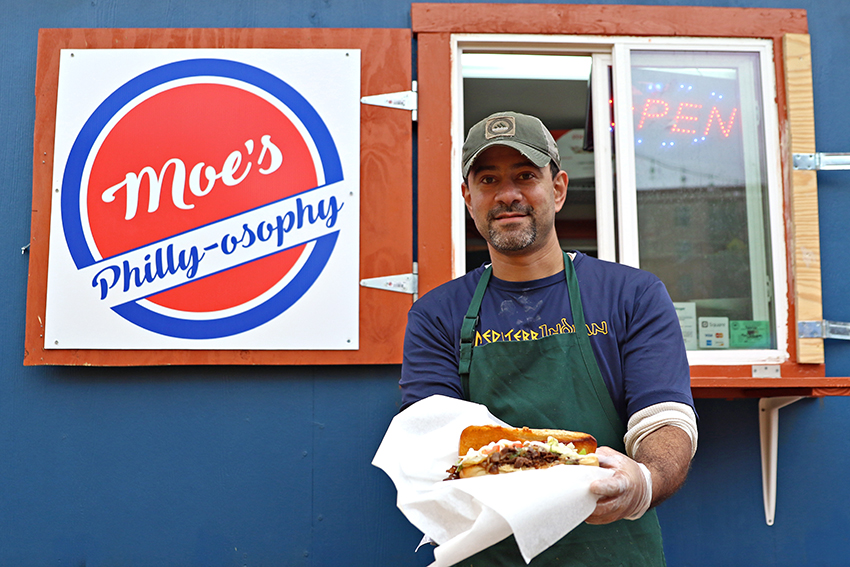 Despite the diverse amount of food truck options thriving in West Campus, a lack of classic American sandwiches prompted restaurateur Mohammed Ismail to fill the void by serving up authentic Philly cheesesteaks.

“[Rio Rancho] has a lot of great options, but I felt the one thing it needed was a Philly cheesesteak truck,” Ismail said.

“I lived in Philly for a year, where Pat’s and Geno’s make the best Philly cheesesteaks in the U.S.,” Ismail said.

Ismail ensures all the meat he serves falls within halal standards, a term describing meats processed according to Muslim standards of cleanliness and morality. Although Philly cheesesteaks are not typically halal, he said careful preparation improves the quality of the sandwiches overall.

“It’s all organic and grass-fed, there’s no hormones, and the animals are hand-slaughtered as humanely as possible,” Ismail said. “My philosophy is [to use] the best sauces, organic meats and freshest bread from local vendors.”

“What we’re going to start doing in two weeks is include a rotating special sub each week to keep things fresh and exciting,” Ismail said.

The Original Whiz is undoubtedly the menu’s highlight. Sticking to only the basics of Philly meat, melted Cheese Whiz and grilled onions, this sandwich is simplicity in its best form. The three ingredients come together to create a perfectly greasy mixture that is held together in a soft, warm roll. After one bite, it’s immediately apparent why this is the version of the Philly cheesesteak that purists around the U.S. swear by.

The Steak Supreme, while not quite as noteworthy as the Original Whiz, can still go head to head with any other Philly served in Austin. This version of the Philly cheesesteak is more common in South Texas restaurants and replaces the Cheese Whiz with provolone and adds lettuce, tomato and mayo to the mix.

Another high point of the menu was the Buffalo Chicken sub, which combines fresh chicken, Buffalo sauce, ranch and provolone cheese. The Buffalo sauce provides a noticeable, but not overwhelming, spice complimented well by the ranch and the cheese. With juicy marinated chicken holding everything together, this sub is a great alternative for anyone who is not in the mood for a Philly cheesesteak.

Moe’s Philly-osophy doesn’t just stop at quality sandwiches. Even the sides are well-executed. The tater tots, which in most other cases just serve as unexceptional background fodder, can easily be a meal on their own. Nice and crunchy on the outside, soft and greasy on the inside and boasting an ideal salt-to-pepper ratio that leans much more heavily on the pepper side, these tots serve as a great accompaniment to Moe’s sandwiches.

The only shortcoming of the Phillies and subs at Moe’s Philly-osophy is that they are a bit on the skinny side. Oftentimes the best part about a Philly cheesesteak is the fact that the meat almost always outsizes the bread to the point where eating one becomes a minor wrestling match.

Fortunately, Ismail’s  attention to detail in every other aspect of his food makes up for the smaller size of the cheesesteaks. When all’s said and done, Moe’s Philly-osophy has plenty
of potential to become a West Campus staple.