More than 500 testify at public hearing on sanctuary cities 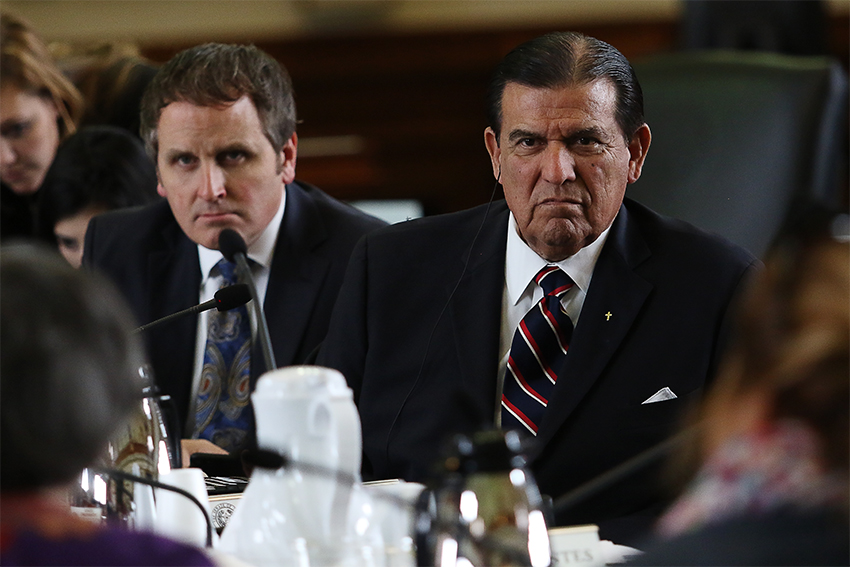 Update (11:37 a.m.): Senate Bill 4, addressing a ban on sanctuary cities, will advance in the legislative process. Following 16 hours and hundreds of testimonies, of which the majority opposed the bill, the committee voted 7-2 in favor of the bill Friday morning.

The vote indicates the bill will move out of committee to be presented to the full Senate.

Original story: More than 500 people testified at the Texas State Capitol Thursday concerning a bill that would prevent cities from determining their own immigration policies.

Charles Perry, R-Lubbock and author of the bill, said the core mission of this bill is to restore the law and apply it without prejudice. Perry said the result of not complying with the law is an undermined society.

“The real cost of continuing to foster, nurture and encourage the contempt of the culture, the contempt for our legal system and the laws contained within is the loss of public trust,” Perry said during the hearing.

The bill would allow law enforcement officers to question the immigration status of those involved in a crime. Immigrants in custody would also be subject to review by Immigration and Customs Enforcement officers and face the threat of deportation, according to the bill.

Additionally, cities failing to enforce federal immigration laws would be denied state grants for a year, according to the bill’s fiscal note from the Legislative Budget Board.

Sen. Eddie Lucio, D-Brownsville, said he opposes the bill because it creates an environment of distrust between citizens and law enforcement, which could potentially result in a lack of protection for victims and witnesses of crimes.

“Because of the size and the diversity of our state, communities, cities and counties … know and understand their needs and priorities best,” Lucio said during the hearing. “Forcing local law enforcement to assume responsibility for enforcing federal immigration law not only goes against that principle, but undermines trust between police and immigrant communities.”

Several critics of the proposed law said they were concerned about the implications of the vague language used in the bill. Many people who gave public testimony during the hearing expressed concern about police taking on roles as immigration officers.

In light of the Legislature’s discussion on sanctuary cities, J.B. Bird, UT director of media relations, confirmed UT is not legally allowed to become a sanctuary campus.

“The university police, following statewide law enforcement practice, do not ask for a student’s immigration status,” Bird said. “UT is firmly committed to protecting student privacy and will not change those policies or values, in accordance with state and federal law.”

Gov. Greg Abbott declared sanctuary cities an emergency item during his State of the State Address Tuesday. While bills usually cannot pass until after the first 60 days of a legislative session, an emergency item can be voted on by legislators before then.

Sally Hernandez, a new sheriff in Travis County, recently announced intentions to not fully comply with federal immigration authorities. In response to these actions representing “sanctuary city” policies, Abbott said he canceled criminal justice grants to the county on Wednesday, according to the Texas Tribune.