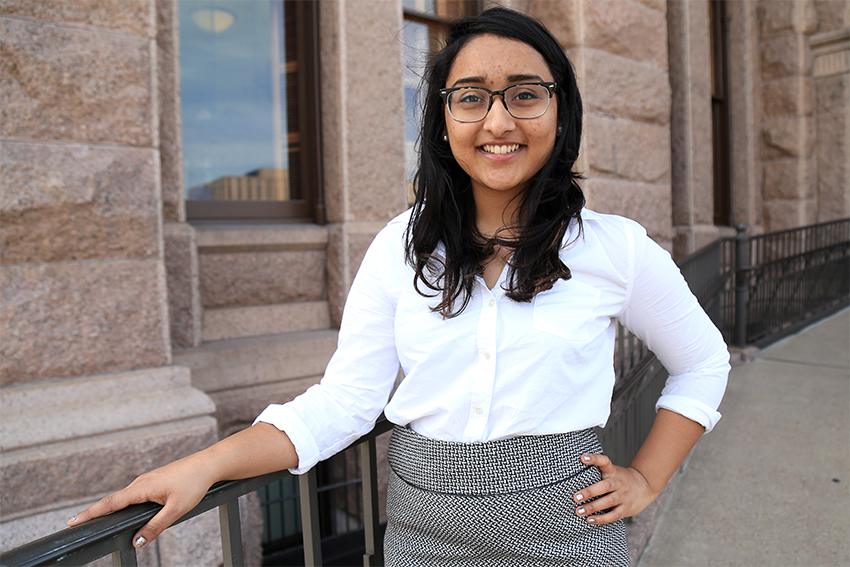 Growing up with her eyes glued to the television, soaking up the banter of newscasters on CNN, Nali Shah got her unofficial education in politics. Now a government senior, Shah has continued her lifelong commitment to justice by founding the UT student chapter of the American Civil Liberties Union.

Shah said after spending two years under the care of CPS, she grew to be fascinated with civil service structures. She said she founded the chapter because she wanted to be involved with the legal innerworkings of these civil rights issues.

“I wanted to do something that felt like I was making a real difference,” Shah said. “Of course, I was through research but I (also) just wanted to be involved with the plumbing of issues.”

The ACLU is a national, non-profit organization that provides legal support for civil rights violation cases.

Although ACLU of Texas provides volunteer opportunities to assist with lobbying at meetings, to monitor town council meetings and plan community education events, Shah said she created the UT chapter to promote the ACLU’s mission within the student community and to provide opportunities for student organizers to collaborate.

“The times that I’ve seen the biggest change and the most creative thinking is when we have people from all social, economic, racial and academic backgrounds,” Shah said. “I think engineers have just as much to contribute to the conversation as political science junkies, and I think we’re doing ourselves a disservice by not including and not encouraging
those voices.”

Before starting the chapter, Shah reached out to Victor Cornell, the ACLU of Texas Statewide Advocacy Manager who was on board to move forward with the chapter. Cornell previously worked with a previous ACLU chapter at the UT Law School which is no longer active.

“It will be great to have a presence back on UT Austin campus and I look forward to working with them for many years to come,” Cornell said.

Members of the UT branch have plenty of opportunities to get involved. The chapter’s various teams are responsible for communications, events, recruitment and working together with team leaders to organize projects.

Advertising sophomore Garrett Mireles joined the chapter this year and is now a member of the communications team. He said once the chapter gets more traction at UT, UT Austin members will volunteer for ACLU of Texas to attend council meetings and observe protests.

“You are certainly able at this school to walk to the capitol and have a face-to-face conversation with your representative,” Mireles said.

Other planned events coming up for the chapter include “What’s Donald Trump Doing in Your Neighborhood: Immigration in Austin,” a workshop outlining the legal rights of immigrants under President Trump’s current immigration ban and a “Reproductive Rights Conference at UT Law.”

Shah said she is confident the chapter will be kept busy. Within the past month alone, the new administration at Washington has commenced changes to policies regarding civil rights.

Though the current political climate is unstable and leaves the future uncertain, Shah said she looks forward for the chapter to take on the challenges ahead.