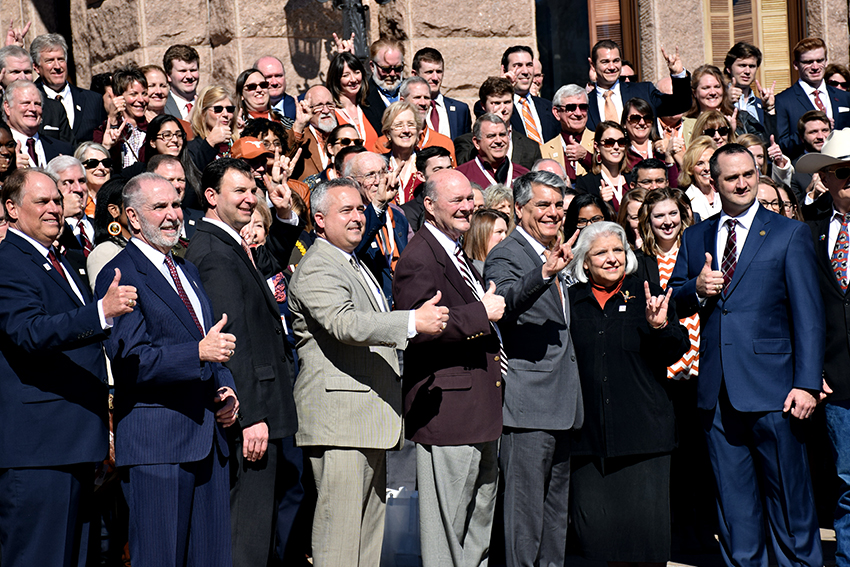 Longhorns and Aggies set aside their differences Wednesday to lobby at the Capitol on behalf of their joint goal of sustaining affordable yet excellent higher education in the state.

Texas Exes and the Association of Former Students of Texas A&M have organized this one-day event, known as Orange and Maroon Legislative Day, since 2003. This year, 240 former and current students of both universities visited all 181 legislators’ offices in addition to the offices of Gov. Greg Abbott and Lt. Gov. Dan Patrick.

During a news conference hosted by the alumni associations, UT President Gregory Fenves and A&M President Michael Young emphasized their appreciation for the event. Fenves said the stories of people who have been personally impacted by either of these universities help advance legislative priorities, such as upholding the role of research in both institutions and expanding opportunities for future college students.

“The Texas Legislature has supported these two universities since they began in the late 1800s,” Fenves said during the press conference. “But that commitment needs to be renewed every biennium and it gets renewed when they hear from the alumni of the two universities.”

Sen. Judith Zaffirini, D-Laredo, urged volunteers to advocate for a funding plan that will allow students to receive a high quality education at an affordable cost. Zaffirini said her goal is to ensure 60 percent of 24-30 year olds receive a postsecondary education by 2030, and believes alumni bringing this up to legislators will help eventually make it a reality.

“Anybody can provide a cheap education, that’s easy,” Zaffirini said. “But can we make higher education affordable and still maintain our excellence?”

The universities are at risk at losing funding for research initiatives because of a proposed cut in funding for special items in the Senate budget.

Young said both UT and A&M receive significant funding for research and told volunteers to advocate against their loss before it hears a vote on the Senate floor.

Daniel Becka, vice president of constituent relations for Texas Exes, said the contribution from former and current students is central to the mission of the event.

While many alumni from both schools participated in the event, Becka said students volunteered too.

Student Body President Kevin Helgren said he participated in the lobbying event today because he wanted to express desires and concerns students have to legislators. Helgren said he advocated for college affordability during the majority of conversations he had with lawmakers.