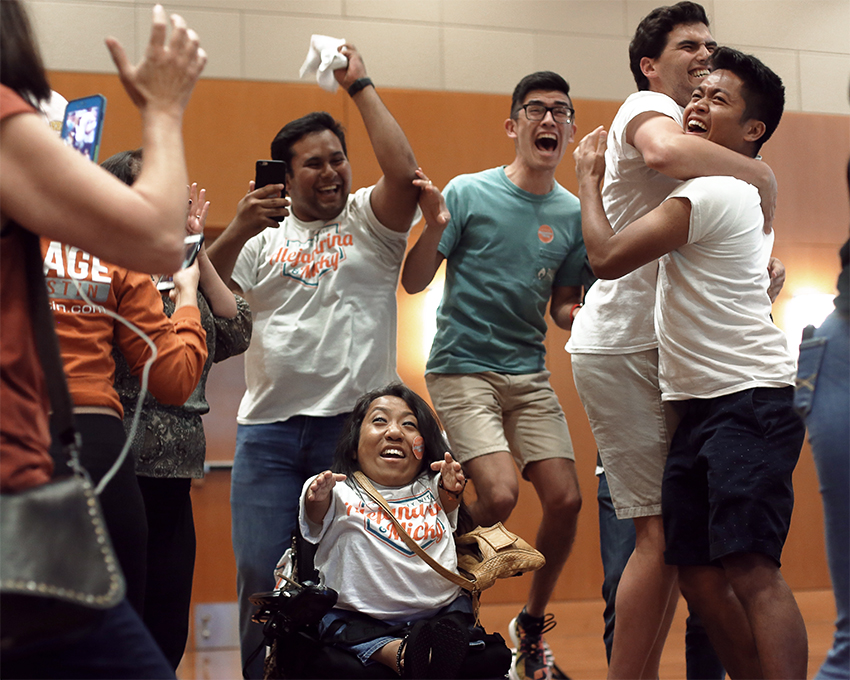 The Election Supervisory Board announced Guzman and her running mate Micky Wolf as the student body president-elect and vice president-elect after a campus-wide election runoff between the campaigns of Guzman-Wolf and Isaiah Carter-Sydney O’Connell.

Guzman, a government and Mexican-American studies senior, said she is excited to set the tone that Student Government is open for everybody and that she owes her success to her campaign team.

“It all goes back to my friends (and) those who have supported me and helped me,” Guzman said. “It would not even be possible if it weren’t for the team. I really want to inspire those who come next.”

In 2016, 6,087 students voted in the SG campus-wide election runoffs for student body president and vice president, and this year, 8,991 students voted. The Guzman-Wolf campaign ran on a platform of representation, advocacy and empowerment with the slogan “RALLY,” or “Representing All Longhorns Like You.” The pair plan to work directly with student leaders on campus initiatives, integrate the Multicultural Engagement Center and the Gender and Sexuality Center, add handicap-accessible vans to SURE Walk, provide guarantor forms for undocumented students in off-campus apartment buildings and to revive the non-conference Texas A&M-UT football game for 2025. Finance junior Cameron Maxwell, one of the campaign managers on the Guzman-Wolf campaign, said he believes Guzman’s unique background will benefit the student body.

“I knew that the work that (Guzman) was doing in the MEC would not only carry over in the MEC but to everyone she met,” Maxwell said.

“It’s been a ton of hard work, and it’s all paid off today,” Wolf said. “It’s very surreal right now. It does not feel like it’s happened, but I’m extremely ecstatic.”

Government junior Carter, former presidential candidate, said it is hard to be disappointed in the results when his team exerted its best effort.

“We had two teams that were really, really willing to work hard and had messages that resonated with thousands of students,” Carter said. “(Our campaign) ended up gaining 500 to 600 votes in a week. I think it’s something that I have no reason to be disappointed in.”

Carter said his future is unclear, but he might try to give back to the organizations that have made him feel comfortable at the University, including Silver Spurs and Texas Wranglers.