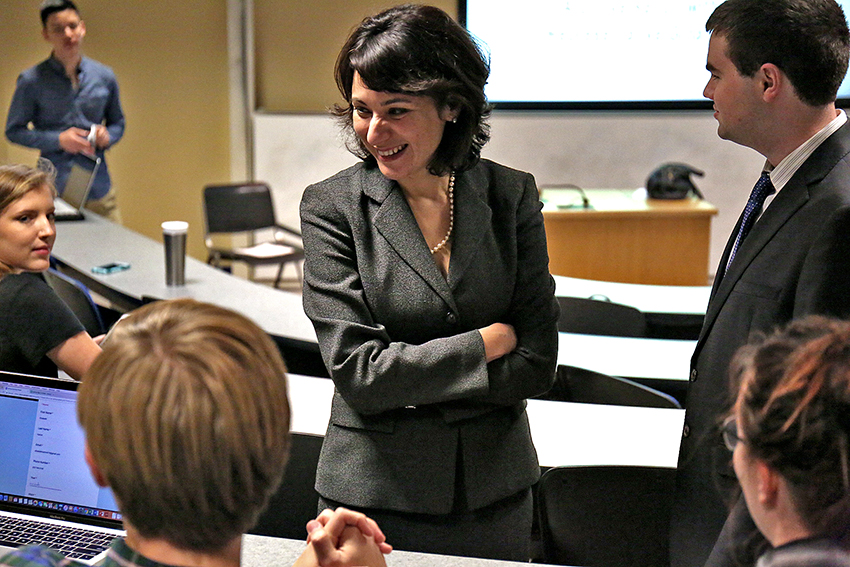 State Rep. Gina Hinojosa, D-Austin, said as a Catholic, she is aware how powerful shame can be in affecting change, and the Texas Legislature deserves some for failing to prioritize issues such as education funding.

Hinojosa discussed her experience as a new representative in the Texas Legislature on Tuesday and criticized disproportionate attention on bills that waste the Legislature’s time during an event hosted by the Texas Political Union, a non-partisan student organization.

“We have a Republican Party who is pandering to a small part of its Republican base, and that’s why our whole state is focused on this non-issue issue (of the transgender bathroom bill),” Hinojosa said. “It’s a discriminatory issue.”

Hinojosa, however, said when she first arrived to the Legislature, she was surprised by how well she got along with most Republicans, finding points of agreement on issues such as education funding.

“We all get along so well,” Hinojosa said. “There is a lot of common ground. Just even at orientation, everybody seems to agree that we should be spending most of our money on public education, our public schools.”

Hinojosa said the current funding system for education is archaic, with an education index over 30 years old resulting in disproportionately high property taxes for Austin.

Hinojosa also discussed current campus carry laws that she criticized last year. This legislative session, she supports HB 391, which provides an option to opt-out of the campus carry policy for all Texas universities.

Government junior Morgan Peavy said he disagreed with Hinojosa’s support of HB 391 because it allows publicly funded institutions to avoid any disagreeable laws.

“(HB 391) stems to reason that any entity, no matter if it receives state funds or not, can just opt out of any state law or national law whenever it feels like it, even if it’s in the Constitution,” Peavy said. “It’s a serious problem.”

Alex Walheim, government sophomore and event host, said he agreed with Hinojosa’s assessment that the Texas Legislature has its priorities mixed up and said some  of its issues “take an extreme, ideological stance,” such as permitless gun carry.

“I think (permitless carry) is a terrible idea,” Walheim said. “It’s so easy for people to access guns. What I think is people should have a more rigorous
process to get them.”