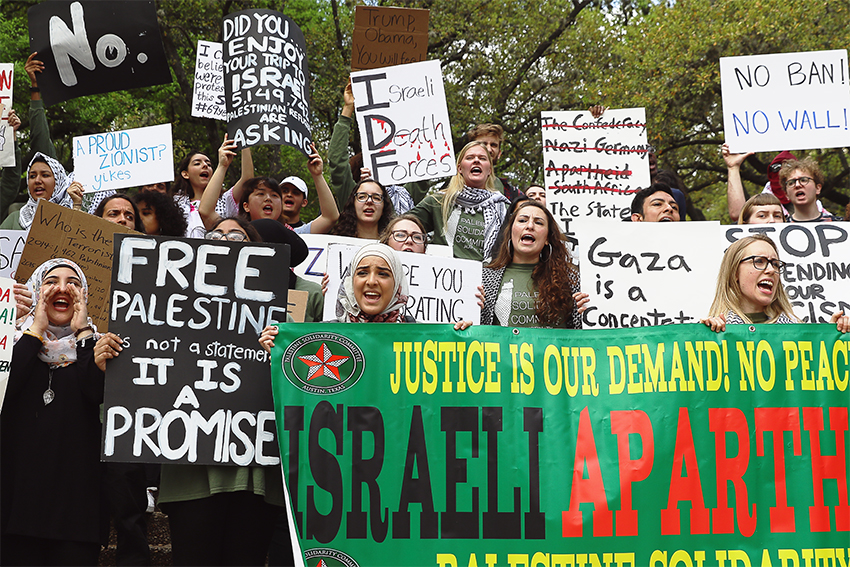 Celebrators and protesters of the Israel Block Party stood on opposing sides of Speedway on Wednesday afternoon, exchanging their conflicting ideologies in what has become an annual occasion for both parties.

Texans for Israel, a student organization, has held the Israel Block party for the past 19 years; this year’s party included food, games and informational booths. The Palestine Solidarity Committee held a protest on the steps of the East Mall in opposition to the block party.

Elliana Sinykin, corporate communications and rhetoric and writing sophomore, is the co-chair of the block party and said its goal is to share the cultural facets of Israel with students.

“The point of this event is to spread and share the rich Israeli culture to the UT community,” Sinykin said. “This is not supposed to be about the politics or the conflicts, this is just to celebrate what Israel brings and what they’re known for.”

The PSC offered a statement which identified the reason behind their protest as “to speak out against the ethnic cleansing of Palestinians,” and address how the event “appropriates Palestinian culture and perpetuates the erasure of Palestinians.”

Jason Taper, Plan II and government sophomore, volunteered at the block party and said he feels strongly about the Israeli cause, disagreeing with the demonstrators’ methods.

“I respect that they are protesting, (but) a lot of the means of their protest I find misleading,” Taper said. “The posters I see and the chants I hear don’t reflect a pragmatic desire to fix conditions. I don’t see any possibilities of moving forward without both sides recognizing the other’s right to exist.”

Protesters held signs that read statements such as “Zionism is racism,” and “Why are you celebrating apartheid?” Taper said he believes the PSC’s definition of these concepts were incorrect.

“(Zionism) is simply the desire for people who historically have been in a diaspora to have a homeland and be able to control their political future,” Taper said. “To equate that desire to racism is something I don’t understand.”

Juan Avila, a comparative literature graduate student who attended the protest, said he is against Zionism and the Israeli land settlement.

Avila discussed issues of the Palestinian-Israeli conflict with government junior Daniel Kane, who attended the protest in support of Israel and the block party.

“People don’t believe in dialogue, and they’ve decided that if you’re a Zionist you must be a racist,” Kane said. “I’m not a racist but I am a Zionist. They said that’s impossible.”

Kane, whom was told by several PSC members that he was unwelcome, felt he was unable to discuss Israeli-Palestinian issues with the protesters.

“If there’s not dialogue, I don’t know how we’re going to solve this problem,” Kane said.

Although talking about the conflict with others is important, Avila said there are problems that are not justifiable.

“Certain ideas, like racism or the delegitimation of another human being’s right to live, are not up for discussion,” Avila said.

The PSC members declined to be interviewed for this story but held several discussions about the conflict with pro-Israeli and pro-Palestinian bystanders.