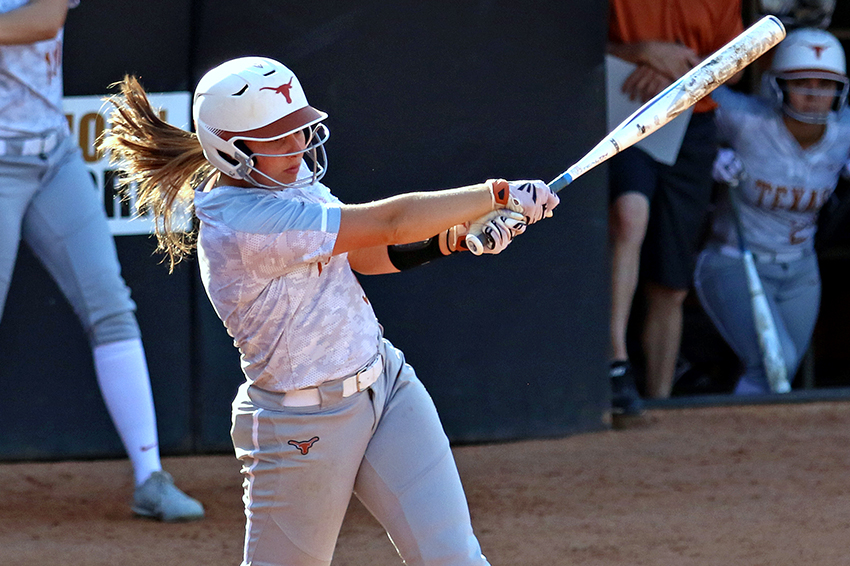 Defense and pitching were the keys to the Longhorns’ success Sunday in their 2-0 sweep of the University of Houston Cougars.

Redshirt sophomore Erica Wright was just one inning away from a no-hitter in game one, but settled for her sixth-career one-hitter in the 3-1 victory.

“Obviously the win is more important to me than the no-hitter,” Wright said. “I felt like umpire had a pretty tight zone going through the game. And so coach Clark was just like, ‘You know what? Today is the day you’ll just have to spin it through the zone and just let the defense play.’”

The Cougars’ only score came in the first inning on a walk and two sac flies.

Sophomore Reagan Hathaway was first on base for the Longhorns with a triple to center field in the bottom of the first. Heading into the second, the score was tied at one run apiece.

Action at the plate resumed in the third inning for the Longhorns. Senior Devon Tunning’s single to right field put the Longhorns on base. Freshman Taylor Ellsworth brought Tunning home on a single to give Texas a 2-1 lead.

Senior Tiarra Davis squared up at bat for a single. A walk and a fielding error brought Texas’ lead to 3-1.

Wright put on a show from the mound, but her teammates got the job done in the field as well.

“She didn’t have her best stuff, but she just found a way to trust her stuff enough to just spin the ball well even though she didn’t have great locations on certain things today,” head coach Connie Clark said. “If she would’ve finished out the no-hitter it definitely would’ve been a team no-hitter.”

Davis moved from the plate to the pitching circle for the second game of the day, tossing seven strikeouts and holding the Cougars scoreless until the sixth inning.

“They’re starting to really come together trust themselves a little bit more and seeing a lot of different scenarios thrown at them now that we’re getting a little deeper into the season,” Clark said.

Ellsworth hit a sacrifice fly in the bottom of the fifth to drive in the first run of the game, giving Texas a 1-0 advantage. The Cougars responded in the sixth, scoring on an error with the bases loaded to even the score at 1-1.

In their second extra-inning game of the year, the Longhorns came out on top. At the bottom of the eighth, freshman Kaitlyn Slack won the game for Texas in walk-off fashion. Slack drove in junior Randel Leahy to finish off the sweep.

“I wasn’t thinking, ‘Oh I’m going to win the game right here,’” Slack said. “I was just thinking there are two outs and I’m going to put it in play and see what happens.”

With the two victories, the Longhorns improve to 20-14 on the season with Texas State next on the schedule Wednesday.

“That was great to be able to get two W’s,” Clark said. “I thought we turned our mentality around this game day.”