SURE Walk must become more accountable to students 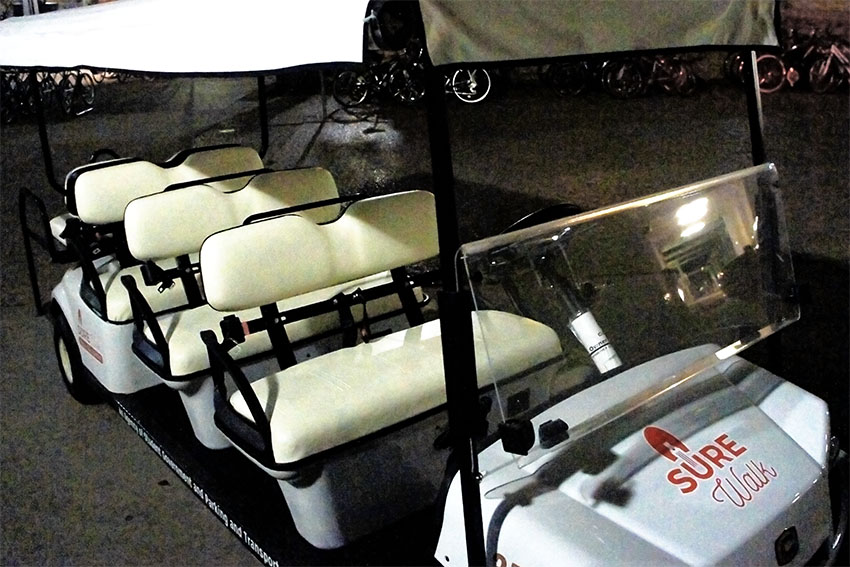 The ‘SURE’ in SURE Walk stands for Students United for Rape Elimination. Originally created in 1982, SURE Walk has, unsurprisingly, seen a huge increase in requests for late-night security since the tragic murder of Haruka Weiser.

But SURE Walk’s current lack of written procedures and Student Government’s oversight have struggled to keep up with both the program’s growth and current information about the way sexual assaults happen to UT students.

Public relations freshman Lauren Hooper was one of many UT students participating in RoundUp activities when she encountered a girl at high risk of sexual assault and alcohol poisoning. “This girl could barely walk, she could barely talk, she could barely stand,” Hooper said. “I feel very positive that, if I hadn’t helped her, something bad would have happened to her.”

Hooper called SURE Walk, “because I know that’s the campus thing to get home safely.” But when the golf cart arrived, Hooper was shocked at the volunteer’s refusal to transport the inebriated student. They said she was too much of a liability, and suggested Hooper either call the police or an expensive ride share. Then the volunteers left to take another call.

Not wanting to get the student in trouble, Hooper personally paid for a ride share to take the girl back to her dorm. Hooper isn’t mad at the volunteers — “they’re also trying to do the best they can,” she said — but nevertheless felt understandably upset that the policy wasn’t clear from the beginning.

“There’s a lot of misconception and there is a need for this to either be cleared up or for something to change,” said Hooper. “I probably won’t use SURE Walk again.”

UT’s Student Amnesty for Drug and Alcohol related emergencies policy means that neither Hooper nor the student she was trying to help would face disciplinary action for calling UT Police Department, but SURE Walk’s volunteers’ failure to share this created an unsafe situation.

In fact, the few online sources about SURE Walk do not mention restrictions on services, and do not include any information on UT’s Amnesty Policy.

This is not the only communication failure from the SURE Walk program. While UT staff in Parking and Transportation Services and the Office of Student Conduct were helpful and open about explaining policies and practices for this column, top SG officers met questions about SURE Walk with hostility, and in one case, an open refusal to answer questions.

When asked about restrictions on SURE Walk use, former SG Chief of Staff, Isaiah Carter, directed attention away from the program, and laid the blame at the feet of individual students.

“I would tell any student who finds concern that it is important to have a plan if you are going far away from home and planning to get drunk,” wrote Carter in an email.

Carter’s response reveals a complete lack of awareness of the way college drinking culture can lead to dangerous situations. It also completely disregards recent statistics surrounding situations in which sexual assault happens. No one plans to be sexually assaulted or to be stranded without a way to get home.

SURE Walk may even be a common plan for a safe ride home, because its zone of operation covers West Campus. This service is even more vital because a Cultivating Learning and Safe Environments study shows sexual assault is most likely to happen off campus.

Carter also misrepresented SG’s role in training volunteers, first telling me that was “a question for PTS.” But Jeremy Hernandez, with PTS, said in an email that “Student Government handles the coordination of all volunteers. We are not able to comment.”

Hernandez referred me back to Carter, who, when asked to clarify about volunteer orientation, refused to answer. “I don’t have time to do all of this for an opinion article,” he said in an email, despite having done multiple interviews about SURE Walk with news sources from UT and other organizations in the past.

If a program specifically working for rape elimination is not serving the most at-risk population, that policy needs to be made abundantly clear so that students like Lauren Hooper, trying to prevent a possible sexual assault, are not left in a lurch when they seek services.

Hooper’s experience should not have happened. “Our policy is not to refuse rides to individuals that need them from and to campus,” said SURE Walk director Krishan Sachdev. “If the situation arises that we simply cannot accommodate a group of students we make sure that they get in contact with UTPD who will then provide them with a ride back home/to campus.”

Sachdev also noted that orientation procedures have varied over semesters, but more importantly that there is no training manual or written policy for volunteer training.

While these may be effects of rapidly growing demand, confused SURE Walk volunteers or employees create dangerous situations, such as the one Hooper found herself in. If SURE Walk really wants to accomplish the mission in its name, it needs to evaluate its policies and training, and become more accountable to the UT student body.

MacLean is an advertising and geography sophomore from Austin. She is a senior columnist. Follow her on Twitter @maclean_josie.