Longhorns take ups and downs into match with Texas State 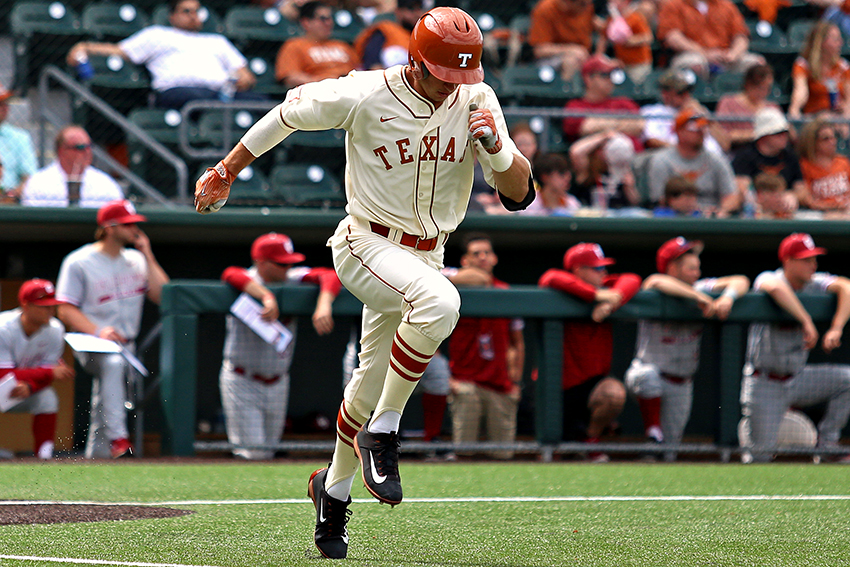 The Longhorns dominated the first two games of the Red River Showdown this weekend, but a recurring theme prevented Texas from completing the sweep.

Ten of the Longhorns’ 13 total losses have been the outcomes of one-run differences, including Sunday’s 2-1 defeat to No. 18 Oklahoma.

With the series win already on their side, the Longhorns brought their confidence into the final game, looking to sweep their ranked rivals. They immediately got to work at the plate and took a 1-0 lead in the first inning.

But Clemens — who leads the team in home runs and RBIs — was ejected during the fourth inning for arguing with an umpire after he struck out. With the morale deflated in the Longhorn dugout, the 2-1 loss was inevitable.

“We’ve lost quite a few one-run games now,” junior outfielder Travis Jones said. “We have a lot of young guys, and I can’t take myself out of that category — I try too hard sometimes, too. But it’s really just relaxing, kind of taking a breath in between pitches. Experiencing being down in a game and trying to battle back definitely helps.”

Looking back at earlier moments this season, Texas opened conference play with back-to-back one-run losses to No. 6 Texas Tech. The Red Raiders rounded out the series with another win, sweeping the Longhorns at UFCU Disch-Falk Field.

Although Cooper didn’t blame the losses to one specific facet of the game, he said his team was on the brink of reaching an elite status among its Big 12 competition.

“I want to say we’re close, but I feel like we’re there,” Cooper said after the second loss to Tech. “It’s not one thing or the other, that’s why it’s a team sport. … You don’t win or lose because of one thing.”

The Longhorns ran into a similar situation on March 21, when they faced Texas State in San Marcos. The Bobcats delivered a thrilling 11-10 walk-off victory in extra innings for their home crowd.

Now that the Longhorns are midway through their conference schedule, they have shown improvements in terms of being able to find big wins against ranked opponents such as Oklahoma.

However, they are still looking to improve their ability to stay focused as a team in order to finish the entire series strong.

“I think we have much better confidence, and we’ve continued to get better at all phases (of the game),” head coach David Pierce said. “I like what we’re doing. We’ve just got to find a way to win those types of games, and that’s about maturing from a big win in a big series and being able to do it again on day three.”

The Longhorns have a chance to avenge one of their one-run losses when they host a rematch with Texas State at UFCU Disch-Falk Field on Tuesday night.