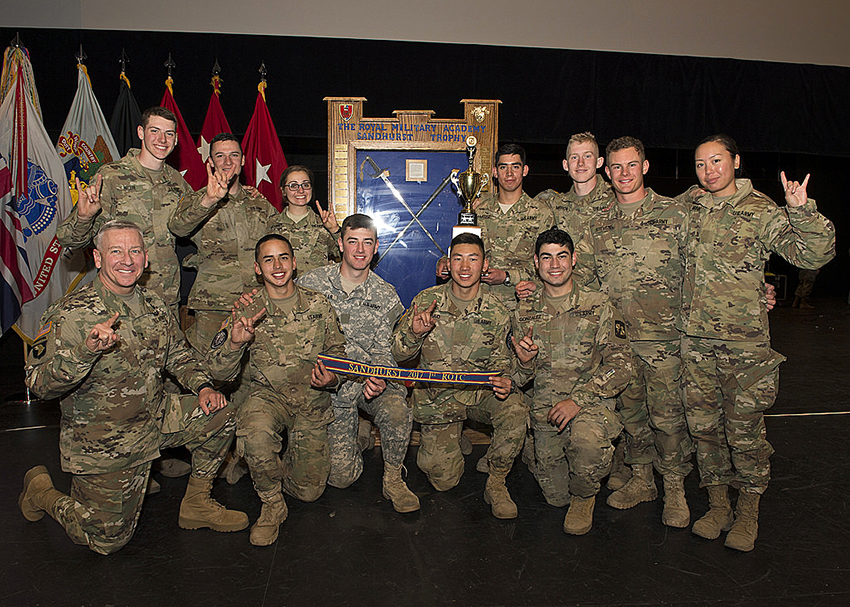 A team of 11 UT ROTC cadets from different backgrounds and majors came together over the weekend to face 11 challenges throughout a 25-mile course, which included combat swim, trauma care and weapon handling.

The Texas Army ROTC Ranger Challenge team won first place Saturday for the ROTC division in the Sandhurst Military Skills Competition at the United States Military Academy in West Point, New York. The team also placed in the top 10 percent of all teams in the competition, which included a total of eight ROTC programs and 62 teams representing international military academies.

“It was the most that I’ve ever spiritually, mentally and physically grown in such a short amount of time,” said Cadet Kelsea Howe, a finance junior. “I did an obstacle that I never could do before by myself.”

The team also competed in the Sandhurst competition in 2015 and 2016. Compared to last year, Cadet Daniel Gonzalez, the team’s captain, said they worked better as a team this year, which was the reason they won first place.

“No one was fighting, which was a problem we had in the past,” said Gonzalez, an international relations senior. “We’re carrying 70 pounds of equipment, so when one person’s getting tired, the next person who’s feeling okay was more than willing to take a few pounds from them.”

Cadet Cole Stevens, a public relations senior, said everyone came together as a team despite their different ethnic and socioeconomic backgrounds.

“Our team was made up of students, cadets from every background imaginable,” Stevens said. “Competitions like these were just an equalizer. You just depend on your teammates so much that wherever you come from, it just doesn’t really matter.”

“For some of them, the competition was surprisingly not as hard as they thought it was going to be, but that’s because they trained and trained and trained,” Zinnante said. “This is a 25-mile movement from one event to the other, with heavy gear on, going up steep terrain, going down steep slope, in cold weather.”

Prior to the Sandhurst competition, the team had to win two other competitions to qualify, including the Fifth Brigade Ranger Challenge Competition last fall.

Although only 11 cadets participated in the Sandhurst competition, Zinnante said a total of 17 cadets helped advance the team to its first place win for the Fifth Brigade Ranger Challenge Competition.