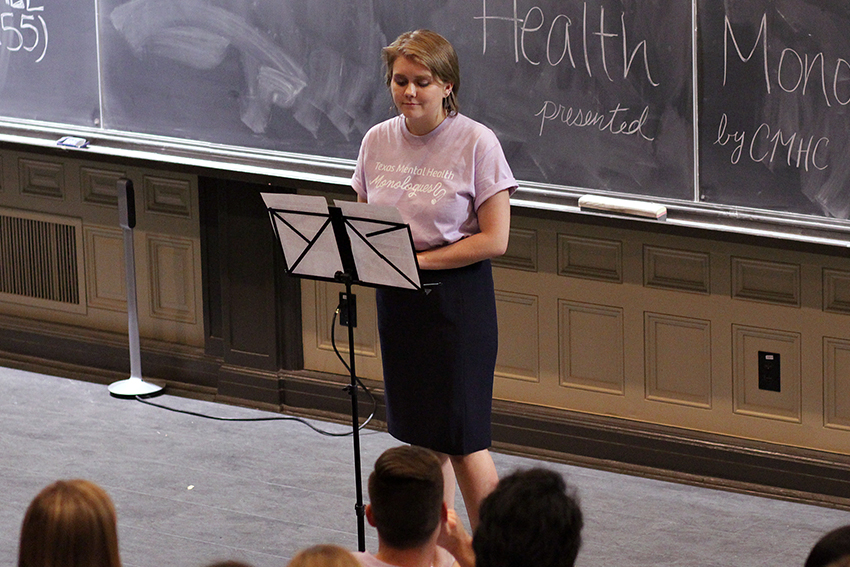 Depression and anxiety once consumed neuroscience junior Justin Ahamed’s life — until he opened up about his struggles and finally accepted help.

“Sometimes, I feel everything,” Ahamed said. “I’m overwhelmed with stress, with despair, with a torrent of emotion so powerful that it knocks you off your feet. The whispers in my mind would echo that no one cared about me … that no one wanted me.”

Ahamed, who shared his personal experience with mental health at the Texas Mental Health Monologues Tuesday night, said finding the right medication and resources was a long process but ultimately worth it.

“Being vulnerable and asking for help is one of the most humbling sensations, but it’s what helped me get the resources that I needed to feel better,” Ahamed said. “There’s no one pill that fixes it all. It’s a big process of trial and error.”

The event, which was part of Mental Health Promotion Week, had six speakers, three musical performers and around 100 student attendees. Hosted by the CMHC, the monologues were written by student volunteers who practiced their performances for eight weeks with the help of coaches at the CMHC.

Marian Trattner, suicide prevention coordinator for the CMHC, said the monologues allowed students to have a more intimate conversation.

“Students are going to relate more to their peers than having a keynote speaker, and it also normalizes that all students have mental health,” Trattner said. “It can help students in the audience realize that mental health is just a part of the human experience.”

Several mental health resource groups, such as the National Alliance on Mental Illness student organization, tabled at the event as well.

Social work junior Yanusha Yogarajah, who performed “Ex-Factor” by Lauryn Hill, said having dealt with depression herself, she wishes this event had been held earlier.

“This event is so needed on a campus like UT, because mental health is very much stigmatized and there’s no conversation about it, even though a huge portion of the population deals with some kind of mental health issue,” Yogarajah said.

Yogarajah said she hopes the performances help students in the audience feel less alone and use the resources available to them.

“It will get better if you reach out,” Yogarajah said. “Substantially better.”