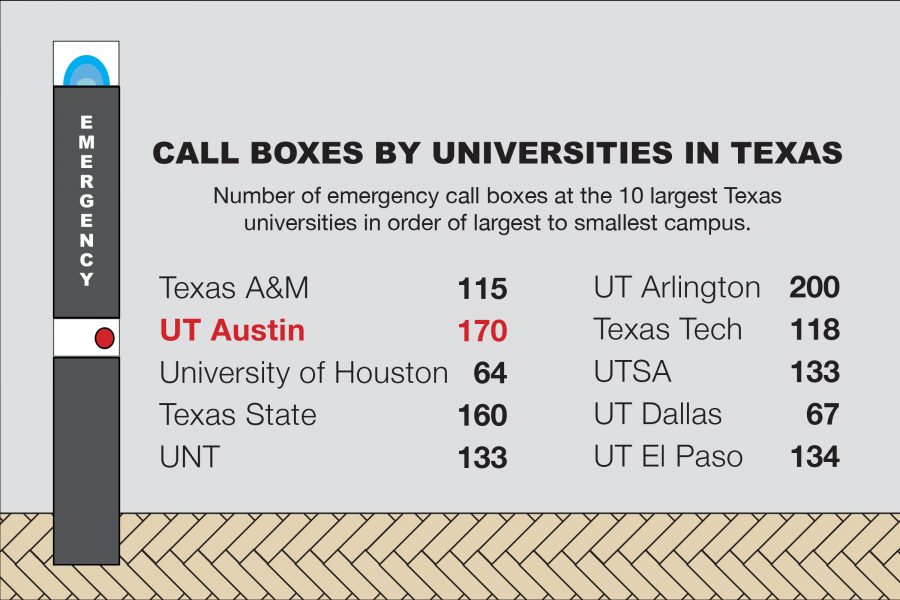 UT Austin has more emergency call boxes on campus than almost any other of the 10 largest universities in Texas, second only to UT Arlington.

More than 170 police call boxes, or “blue lights,” are dispersed across campus. In comparison with other state universities such as Texas A&M University and Texas Tech University, UT has one of the highest densities of call boxes per acre in Texas.

“I like to know that we’re a leader in that regard,” said Michael Murphy, UTPD community outreach officer. “I believe that our department has really taken steps to do what we can to make this campus a safer place.”

Bob Harkins, associate vice president of campus safety and security, said the number of call boxes has more or less stayed the same over the past several years, aside from the call boxes added because of the construction of the Dell Medical School. Following the death of Haruka Weiser last spring, accounting junior Amanda Lanter started a petition to add more emergency call boxes to campus, but it fell short of the 1,000 signature goal and no action was taken.

The emergency call boxes are usually used when students are lost or press the buttons accidentally rather than in emergency situations, Harkins said. He said police call boxes are becoming less essential to campus safety in the current age of technology when almost every student carries a cell phone.

“The call box gives the feeling and perception of safety,” Harkins said. “I’m not sure they play a real vital role in terms of our campus safety and security.”

Murphy said although the boxes aren’t frequently used for emergencies, they are still a necessary feature on campus.

“I would rather have the call boxes out there for 100 years and never receive an emergency call on it until the day that someone needs them,” Murphy said.

Isaiah Carter, former Student Government chief of staff, said the University should add as many safety measures as possible. Carter currently oversees the SURE Walk program.

“Safety is a priority and should be a priority all of the time,” government junior Carter said. “It just takes one student not having access to resources that could have indeed saved their life.”

Carter said he would like to see more call boxes added to campus, particularly in the West Campus area. He said the dense population of students living in West Campus and the lack of safety features make the area less safe at night than the main campus.

Undeclared freshman Alejandra Chapa lives in West Campus and said she would feel safer at night with added emergency call boxes. She also said the main campus has enough call boxes, but it is difficult for students to find them.

“I think it would be useful to let people know where they are,” Chapa said.

Because of UT’s changing campus and construction, the University is currently in the process of doing a study on existing call boxes and their placement, Harkins said.