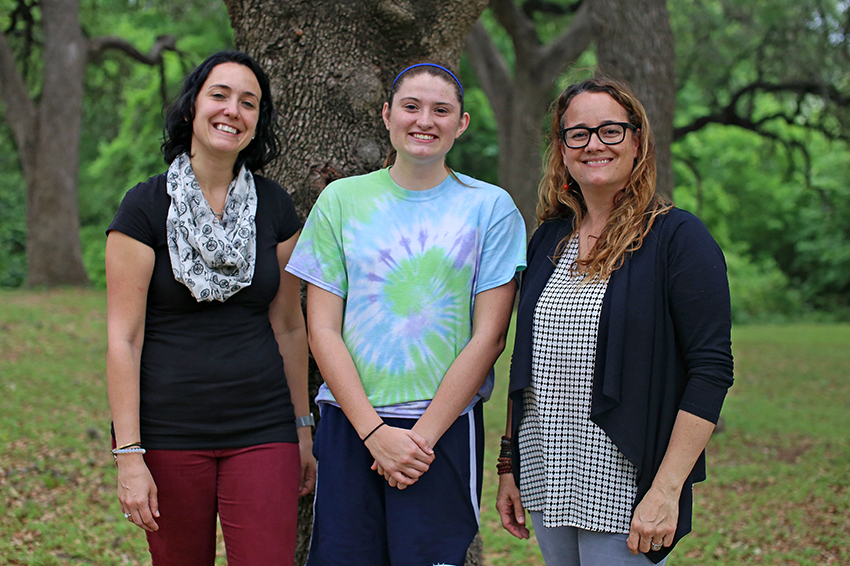 Editor’s note: Some of these interviews were conducted with the help of an interpreter.

The deaf community in Austin and around the world has found a way to embrace music without being able to hear it — at least not in the traditional sense.

There is a misconception among music listeners that music is purely a sound-based art form. But many in the deaf community have found ways, whether through vibrations, visuals or poetry, to engage with the vast art form.

“It’s like being in another world,” said Tatum Wiechman, a senior at the Texas School for the Deaf and undeclared incoming freshman. “I like to crank (the music) up as a loud as I can so I can hear it, I can feel it.”

Stella Egbert, professional development and ASL services coordinator at TSD, said when she goes to a show, she will contact the general manager of the venue so that proper accommodations can be provided. But professional concert ASL interpreter Amber Galloway Gallego said there are many venues that are not providing interpreters despite American Disabilities Act requirements.

“(These venues) are kind of just waiting to get sued,” Galloway Gallego said. “How many lawsuits does one deaf person have to do to finally get their basic human rights met? I had two venues in the last month that refused to provide interpreting services. It has to change.”

Galloway Gallego has translated for artists such as the Red Hot Chili Peppers, Snoop Dogg and Wiz Khalifa on Jimmy Kimmel Live. She has received fame due to her revolutionary signing style, which deeply integrates the rhythm of the music, making the translation visually representative of the performance on stage.

“I study the artist so much it actually becomes like they are really coming through me,” Galloway Gallego said. “I want it to look like them, like I am them, (like) I am just another instrument on the stage for their shows.”

In October of 2014, the Texas School for the Deaf hosted a musical event titled Vibes. Wiechman said they provided special vibrating bracelets that were synchronized with the music and lights to facilitate the accessibility of the music to those in the deaf community.

“It is important to emphasize that music is not only a sound-based art form, (but) a visual art form as well,” Egbert said. “For a deaf person, they can enjoy all of those aspects of it and connect to the music in that way.”

Music and the Deaf is a charity based out of West Yorkshire, England, founded by deaf musician Paul Whittaker, that focuses on teaching deaf people to play musical instruments. Will Hunt, director of marketing for MATD, said they use games and workshops to teach deaf children to understand numerous musical concepts such as pitch, rhythm and volume.

“We might use a more visual approach than you would if you were teaching a hearing child so that they can understand things more clearly,” Hunt said. “But broadly we teach music with deaf children in much the same way that you teach music to a hearing child.”

MATD focuses on raising awareness that the deaf can and should be involved in music. They have had reports at schools of music teachers removing deaf children from music classes because they simply do not understand how to teach music to a deaf child.

TSD does not offer formal programs on a daily basis like MATD does for helping students learn to perform music. But 3rd Grade Teacher at TSD Jessica vonGarrel said there are multiple opportunities throughout the school where students can come in contact with musicfrom certain classes to extracurricular activities to just being in the city of Austin.

“We have enrichment programs now in the elementary school, where we teach music videos,” von Garrel said. “We also had a spring play production that (Wiechman) was just in, (where) there is signing and dancing incorporated into (the performance).”

Jessica vonGarrel, third grade teacher at TSD, said there is a vast range of people in the deaf community, and it is dangerous to lump all deaf people together when it comes to the types of music they enjoy and their ability to access it.

Galloway Gallego said everyone is entitled to music and all other forms of art and should not be limited to whether a venue is willing to obey the law and provide an interpreter.

“I don’t think (music) is necessarily a hearing person’s thing,” Wiechman said. “It is an anybody thing.”