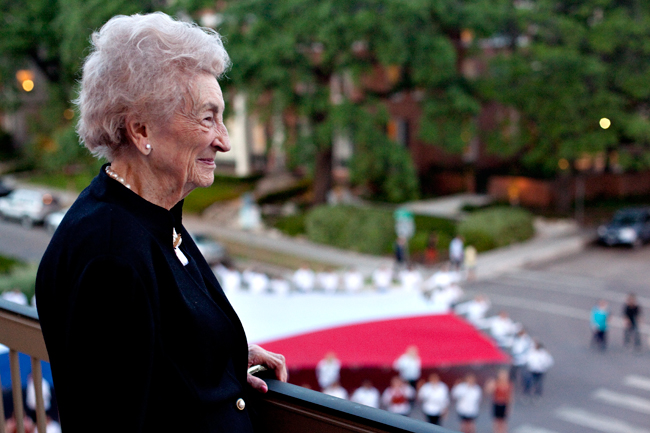 Margaret C. Berry smiles after being surprised by Alpha Phi Omega with a giant Texas flag at the AT&T Conference Center Friday night. Berry was honored earlier that day as the namesake of the ground floor atrium of the Student Activity Center.

Berry died at the age of 101 just after midnight Sunday, according to the Austin American-Statesman, ending a lifetime as an active member and an alumna of the University her whole life.

Born in 1915 in Dawson, Texas, Berry received her Bachelor of Arts in history from UT in 1937 and her master’s and doctorate in history from Columbia University. Berry was the only individual to be both a member of Texas Orange Jackets and an honorary Tejas brave.

“The Club has been around for 90 years, (and) we have been guided by Margaret C. Berry for the majority of that,” Proctor said. “The impact she had within our 50 person circle alone was monumental. I can only begin to fathom what her loss will be.”

Proctor said Berry is one of eight honorary members of the Tejas Club,

“She was so visible and so vital to campus,” Rolan said. “We’re looking forward to celebrating her life and remembering her and taking a moment to just really think about everything she did.”

Rolan said Orange Jackets will be serving as hosts at her funeral service.

Will O’Hara, interim co-executive director for Texas Exes, said he only met Berry once at a Tejas Club event.

“I was aware at that time I was standing in front of a legend,” O’Hara said. “She was late nineties (and) still sharp as a tack … We will remember her in a proper way because she meant so much to us. It was a real blow around here that she passed away.”

O’Hara said Berry received Texas Exes’ highest honor, the Distinguished Alumni Award, in 1996 and has been a longtime member of the Texas Exes Scholarship Committee.

Berry was also a longtime adviser to the Alpha Rho chapter of Alpha Phi Omega, the nation’s largest co-ed service fraternity. UT alumnus Robert Pennington, former president of Texas APO, said he became who he is today because of APO and advisers like Berry, who was consistently calm and insightful.

“She made it safe to be vulnerable (and) to talk about what was challenging,” Pennington said. “There are only a handful of people like that in our life that make a profound difference, and she was one of them.”

UT alumna Mary Cameron, member of the first co-ed APO pledge class in 1976, said Berry served as an unofficial historian to UT, authoring four books on its history in her lifetime. Berry also served as associate dean of women in 1962.

“She never married, (and) she didn’t have children of her own, so we all became her children.” Cameron said. “If anybody had orange blood, she did.”

Berry was honored as the namesake of the ground floor atrium of the Student Activity Center in April 2012. The Margaret C. Berry scholarship was established in 1978 for outstanding sophomore women in Texas Orange Jackets.