McCann continues to rewrite his story at Texas 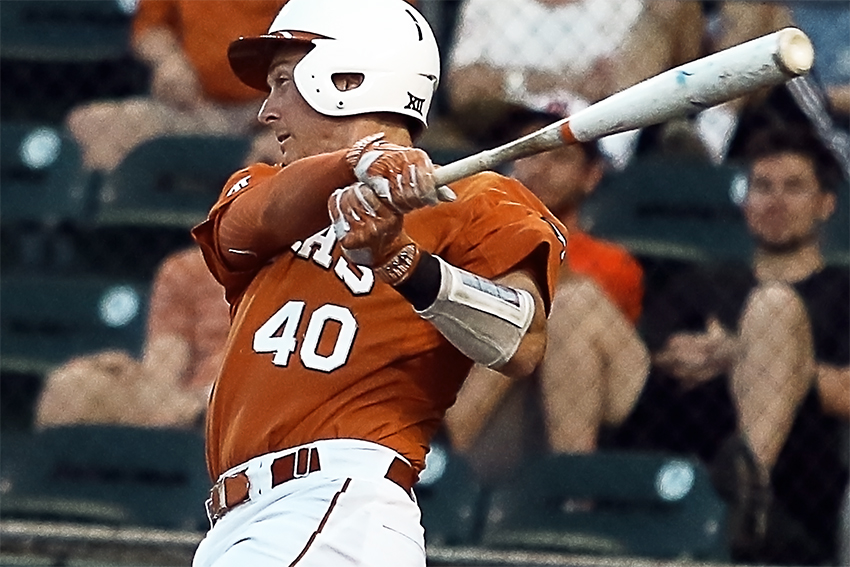 Michael McCann achieved his childhood dream when he made the Texas baseball roster during his freshman year.

That’s why it was such a surprise when the redshirt sophomore hung his cleats up and walked away from the diamond after just one season on the 40 Acres.

The catcher from Round Rock, Texas, played behind junior Michael Cantu for the majority of their freshman years. McCann only saw the field a mere five games in 2015 before making his decision to leave the program at the conclusion of hisfreshman year.

“The biggest reason for my departure was probably that I had no love for the game anymore,” McCann said. “I think, honestly, not that I didn’t play enough but just sitting in the dugout kind of really got to me.”

Last season, McCann’s name vanished from the roster. However, it didn’t take long for him to not only miss the game, but his teammates as well.

“I would turn on the TV, turn on Longhorn Network and watch the game,” McCann said. “I missed the game itself, yes, but mostly the guys. I have a great relationship with all these guys and the fact that we have that friendship and get to play ball on the field everyday — you’ll remember that for the rest of your life.”

McCann wasn’t the only one who went through hardship after his departure. He said his decision was tough for his entire family. It was hard for his mother, especially.

“That was very difficult for us as parents because he’s played baseball since he was four years old,” McCann’s mother said. “It was hard on him, but it was hard on us as well because we missed it and it was something that has always been a part of our lives. So when it wasn’t for a little bit we were kind of at a loss.”

It’s just been a year since McCann’s departure, but things have changed quite a bit since then. The catcher returned to the roster as a redshirt sophomore after taking a year off, and he did it with a bang.

McCann went in Tuesday night’s matchup with Texas State batting .359 – the highest on the team. This forced head coach David Pierce to reward him with playing time, which is something most people, including his mother, weren’t sure how much to expect.

“Initially he didn’t get a lot of play time but he kind of worked his way into proving himself and getting to go out there more mainly because of his batting,” McCann’s mother said. “It was very exciting to see him back on the field and be more involved than he was in his freshman year.”

As the Longhorns head into a three-game series with Baylor starting Thursday night, McCann continues to rewrite his story. And it’s fair to say that nobody is quite as happy as his mother, who was one of the first people he talked to after his first start of the season in Texas’ 6-1 victory over Rice on Feb. 18.

“I walked right up to her,” McCann said. “I said, ‘Mom, it only took me two and a half years to get back here in this spot, but it finally happened.’”