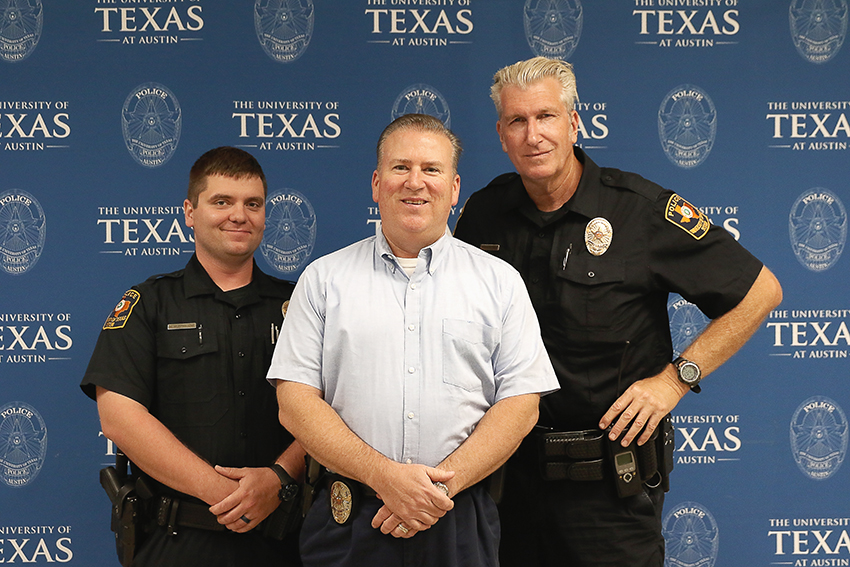 Michael Murphy was one block away from Cole Hall during his sophomore year at Northern Illinois University when a former student entered the classroom, fatally shot five people and wounded 16 others in a 2008 St. Valentine’s Day massacre.

“That’s when my career plans made a turn,” said Murphy, a UT Police Department Officer. “I saw how fast the police reacted and threw themselves into danger to protect that community. That’s something that I keep with me even now.”

Like many UTPD officers, Murphy brought a diverse background in law enforcement with him when he began at UTPD. After working for two years as a patrol officer with the Village of Crestwood Police Department in the southside of Chicago, Murphy decided to make the transition to campus policing about three years ago.

“Directing traffic in a blizzard just wasn’t something I wanted to do my whole life,” Murphy said. “When I was presented with the opportunity to serve with (UTPD), I knew it was perfect. My life had led me full circle after (the shooting).”

Murphy’s transition from a big city to campus is an experience many UTPD officers share.

For 28 years, officer William Pack worked with the Los Angeles Police Department combating Hollywood prostitution, central LA gangs and even the Rodney King riots before settling down at UT.

“It’s completely different,” Pack said. “The city of Los Angeles is a violent and dirty place. In LA, people would deal drugs right in front of me. After 28 years … it was just time to go.”

Pack said beside the lack of violent crime on campus, the largest difference between LAPD and UTPD is the community’s attitude toward the police.

“The things I see in a big city, I also see students and faculty doing here, like walking around (unaware of their surroundings),” Pack said. “Crime from the big city can still spill over into campus. It doesn’t matter where I go. I took this job because I enjoy preventing crime.”

Unlike Pack and Murphy, Officer Michael Larner transitioned to UTPD from within the city of Austin, beginning his career with UTPD five years ago after working for 25 years with the Austin Police Department.

“You still have a lot of the same theft and crime that occurs with the big city, but you’re just (seeing) less of it here,” Larner said. “APD and UTPD are both challenging. You’re dealing with the same crime, just in a smaller capacity.”

“We try to come in and give (UTPD) ideas and suggestions, and sometimes they work and sometimes they don’t,” Larner said. “You just have to bring in your experience and try to incorporate it in whatever way you can. In the end, it doesn’t matter what agency you go to, it’s just a different way of protecting and serving.”