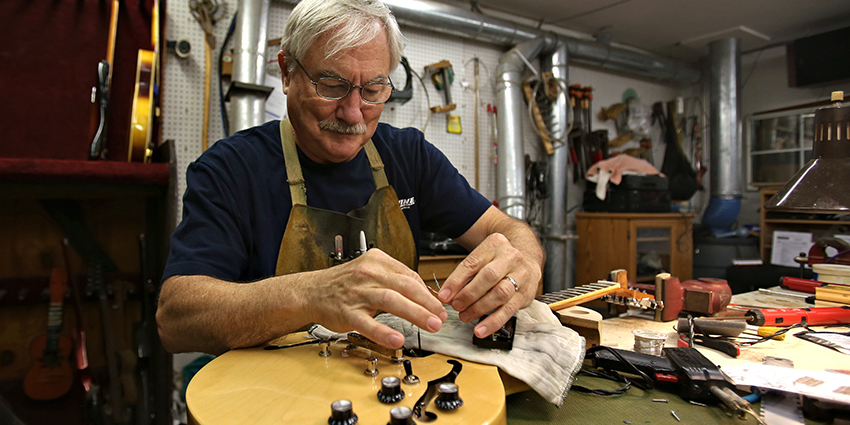 From helping build guitars for Jerry Garcia and Albert King, to meeting Willie Nelson in a dark, backroom private bar, Mark Erlewine’s career as a guitar builder and repairman certainly isn’t void of run-ins with some of the biggest names in music.

Starting his career as an apprentice to his cousin Dan, Erlewine said he struggled to find his passion coming out of high school and wasn’t convinced college was for him.

“I was 18 years old,” Erlewine said. “Vietnam and the draft were looming. I thought, ‘Well, let me try this.’ And it was instant therapy. It was like centering
my brain.”

After working for his cousin, Erlewine developed his own business in Michigan, and moved to Austin in 1974. For 20 years, his storefront was located on Guadalupe, directly across from the Wheatsville Co-op and minutes from the KLRU studios where Austin City Limits was originally taped. Erlewine said that’s how he met Poodie Locke, Nelson’s longtime manager, and eventually got his hands on Trigger.

Nelson’s guitar is one of legends — it helped make his band’s signature sound. After a couple of repairs, Erlewine was invited by Nelson to a performance at the Austin Opry House.

“When I got there, (Locke) said, ‘Come with me’ and took me through these back corridors to a private bar, and Willie was sitting there having a drink,” Erlewine said. “He introduced me to Willie, and Willie said, ‘Keep my guitar going. As long as it keeps going, I’ll keep going.’ It was a little bit of pressure.”

Erlewine has repaired the guitar more than 30 times to date. Erlewine said typical repairs include replacing the tuning pegs and bracing the hole in Trigger where Nelson’s right hand often picks at the guitar. Despite the countless repairs, Erlewine said there’s one thing Nelson still doesn’t let him touch: the frets.

“(The frets) are just worn razor thin,” Erlewine said. “This is a classical guitar, so it’s very difficult to wear a fret out with a nylon string. But that’s how much he plays it.”

Aside from his work with famous musicians, Erlewine spends most of his time repairing the guitars of Austin musicians. Erlewine and his wife field dozens of repair requests a month.

Jesse White, a patron, friend and bandmate of Erlewine, said Erlewine’s key to success is not his master luthier skills, but his character.

“From knowing the man and everything he’s gone through, he’s one of the most mellow, laid-back people that I’ve ever met,” White said. “I’m just proud and blessed to call him my friend.”

Throughout his career, Erlewine has designed instruments for the likes of Mark Knopfler and Billy Gibbons of ZZ Top. Occasionally, those designs become production instruments and sometimes featured in films such as “Back to the Future” and “This Is Spinal Tap.” However, no matter how big his business may get, Erlewine said he thinks people should take time deciding their direction in life, rather than jumping in head first like him.

“Don’t just spend your whole life towards one thing without looking around,” Erlewine said. “Take a breath, take a year off. Whatever it takes to decide what (you) like to do.”

Correction: Erlewine and his wife field dozens of repair requests a month, not a year. Dianne Erlewine's name is spelled "Dianne" not "Diane." The Texan regrets these errors.