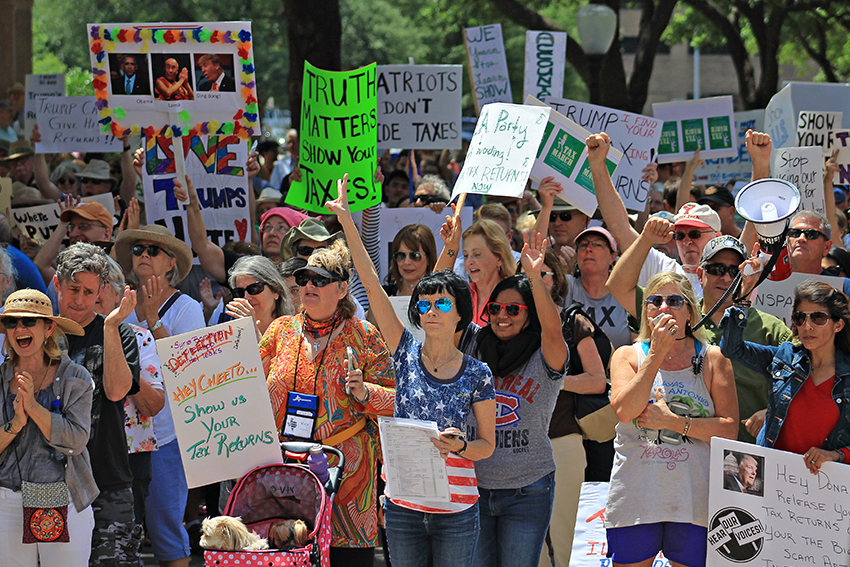 Protesters chanted “traitor” and “show us your taxes” as they demanded President Donald Trump release his tax returns during a protest at the state Capitol on Saturday afternoon.

About a thousand people, according to Capitol police, joined others in a national Tax March, demanding Trump be more transparent about his taxes and business connections. With the tax filing deadline coming up tomorrow, some advocates said Trump owes America his tax information that presidents before him have released.

“When Donald Trump said that he was worth $10 billion and everyone else in finance are telling us it’s less than that, it matters because he should not be lying as president,” said J.C. Dufresne, president of the advocacy group Common Cause Texas.

“I think fighting for tax disclosure helps some action get done, hopefully,” Ehrig said. “Releasing taxes has been a tradition for a long time. I don’t know what the problem he has with releasing them, and I think that is what’s concerning.”

Major cities such as New York and Los Angeles saw thousands of protesters
flooding the streets for the same movement. The protest called for more accountability not only from Trump but from members of Congress, as well.

Protesters fanned themselves and squinted in the sunlight, holding signs with “grab’em by the taxes” and Cheetos to create Trump’s hair.

Key Democratic Party members — including U.S. Rep. Lloyd Doggett from Austin, whose district encompasses parts around campus — have backed a bill requiring Congress to request that Trump release his returns.

Rey Garza, a rhetoric and writing senior, said he leans conservative and was surprised when he saw a protest was happening that day. Garza said he understands why the protesters want transparency, but felt the protest only exacerbated the issue.

“This protest is a general excuse to come back to hate Trump,” Garza said. “They’re using tax day to fume, to fuel the flame.”

“I don’t know what (this) country did to deserve this, but our country is facing its own plagues … of the ethical kind,” Kaplan said. “We can all be hopeful that somehow, some way, the current
president that we are stuck with will be reborn from a complete lack of ethics and transparency into someone who champions disclosure.”

“Every federal employee has to do annual ethics training because we get paid by the taxpayers,” Goodgame told the Daily Texan. “We have the responsibility to handle the funds in an ethical and responsible way, especially since the taxpayers provide for the federal government.”