“The Fate of the Furious” toes line between awesome and silly 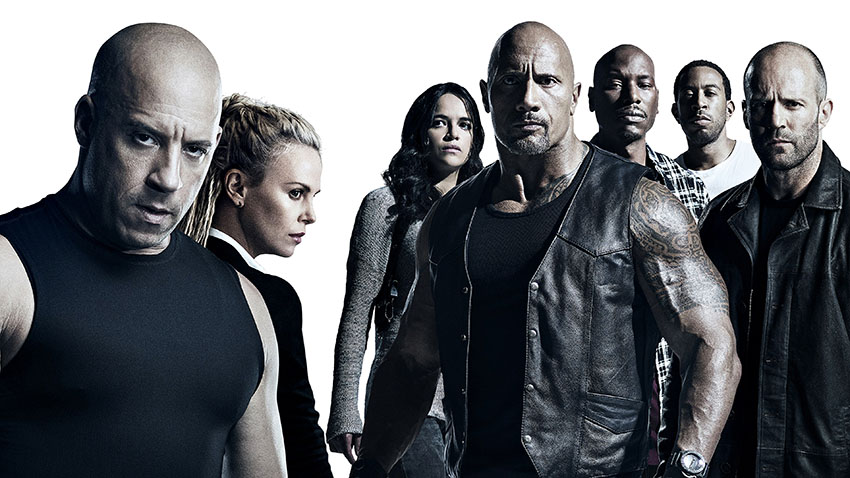 No one could have predicted the fate of “The Fast and the Furious” back in 2001. The franchise started off as a “Point Break” clone before straying off-road to find its identity. After four mediocre films, “Fast Five” found the franchise’s core elements — Vin Diesel, over-the-top action and family — and doubled down on them. Each successive installment has followed in “Fast Five’s” footsteps by becoming less and less grounded and ever more ridiculous. The eighth entry in this series, “The Fate of the Furious,” now seeks to turn the franchise into one about superhero spies.

With the loss of the late Paul Walker as Brian O’Conner, “Furious” can no longer rely on the brotherhood between him and Dom that served as the heart of the films.  You won’t miss it though, because “Fate” excitingly spins Diesel’s anti-heroic Dominic Toretto against his beloved team, which features returning members Luke Hobbs (Dwayne Johnson), Letty Ortiz (Michelle Rodriguez) and Roman Pearce (Tyrese Gibson), among others.

Of course, Dom hasn’t really gone rogue. He’s being manipulated by Cipher (Charlize Theron), a powerful hacker who plots to steal a nuclear submarine from Russia and control the world powers. Dom’s reasons for becoming Cipher’s point man are soapy as they can be, but the film somehow makes them work with a surprisingly emotional performance from Diesel.

While Diesel’s Dom laments his predicament, Theron seems to be having the time of her life as Cipher. Her icy delivery and cold stare, coupled with strong characterization by writer Chris Morgan, make her the most believable threat in the series yet.

Diesel and Theron are well-supported by director F. Gary Gray. Gray takes over from “Furious 7’s” James Wan and lends the film a gravitas it hasn’t had before. The stakes are more personal than ever with Dom’s loyalties and relationships on the line, but Gray strikes a balance between drama and silliness, successfully creating a package that takes itself seriously and veers into self-parody.

Along with a new director, several new additions round out the Fast Family as they hunt Dom. There’s the returning antagonist Deckard Shaw (Jason Statham), who despises the team but has a bad history with Cipher. Although he murdered Han and nearly destroyed the Family before, “Fate” finds a clever way to redeem him and allow the heroes — and us — to forgive him.

Scott Eastwood also debuts in the series as an inept FBI agent working under Kurt Russell’s “Mr. Nobody.” Roman dubs Eastwood’s character “Little Nobody,” kicking off a hilarious rivalry in which both characters hurl one-liners at each other like daggers.

“The Fate of the Furious” sustains the momentum of the franchise’s increasing absurdity, but this time less certainly would’ve been more. One of the film’s main selling points is a chase in which Cipher hacks into all the self-driving cars in New York City and sends them tumbling after her target. Even in a franchise such as this, the sequence defies suspension of disbelief in too many ways to be enjoyable. It may very well be the moment where the “Furious” franchise jumps the shark.

The film nearly makes up for its giant misstep with a chase over a frozen bay. This is a tamer, yet more involving, set piece that has just the right amount of schlock and stakes. It feels real enough — at least, as real as it can get — for us to actually fear for the characters. “The Fate of the Furious” toes the line between mind-blowing and mind-numbing, and occasionally crosses it. While the series has wisely left street races and gang wars behind, it must not forget the best action scenes are ones we can believe in.

“The Fate of the Furious”