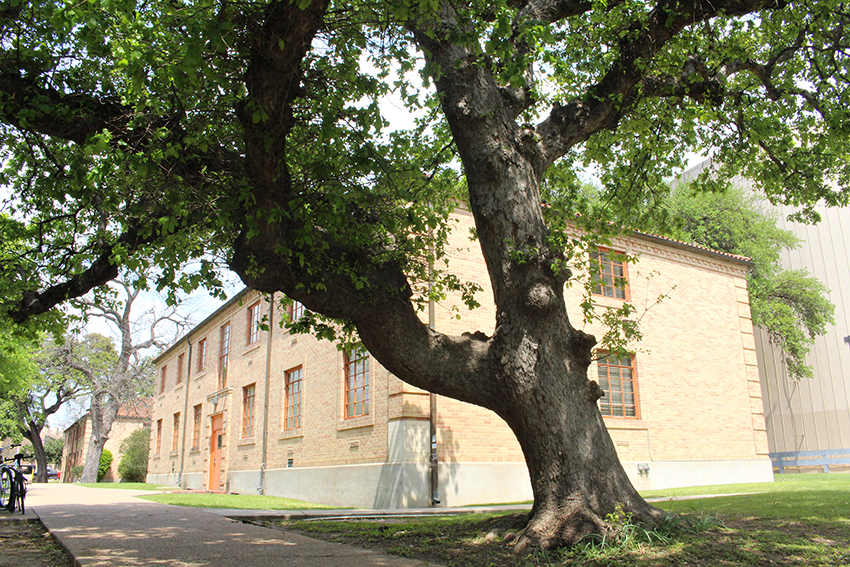 Money does grow on trees — at least in the form of air filtration and keeping buildings cool. Using a new interactive website, curious Longhorns can now see exactly how much UT’s trees are worth.

UT landscape services launched myTreeKeeper, a website that displays statistics for almost every individual tree on campus over the past year, in January. The site is interactive, allowing users to zoom in on any location on campus and learn about the benefits of individual trees or search for trees by location, size or species.

“For most people that look at it, at first it’s not something that sparks their interest, but if you take a little time looking at what it’s saying, it’s pretty interesting,” said Jim Carse, assistant manager of urban forestry. “Typically, people look at a tree and don’t think past what it looks like, but it’s more than just aesthetics.”

The site is part of a three-part project to collect and store data on campus trees; landscape services also adapted software to edit and update information on trees and built a mobile website that landscapers can access in the field, according to Carse.

“We really wanted a place where we could put the data where people can see it and use it as a learning tool,” he said. “We get quite a few requests every year (from classes) that want to learn more about the trees or learn about a particular species or a particular spot on campus.”

The project cost $45,000. This price included hiring a contractor, buying inventory software and preparing a report. The Davey Resource Group was contracted to survey trees and enter data. Carse said these steps helped Landscape Services find and take care of urgent tree issues, such as broken or decayed limbs, that had gone unnoticed.

“There’s no way that our 70-odd landscape staff was going to spot everything in all the trees on campus,” Carse said. “This was a way to get a separate pair of eyes that looked at nothing but tree concerns and tree issues around campus. At the very minimum, it created a safer environment.”

The Value of an Urban Tree

Urban forests, or the collection of trees and other vegetation in a city, reduce noise from roads, prevent soil erosion from rainwater and filter pollutants out of the air and water, Carse said. MyTreeKeeper calculates benefits from a total of 4,830 trees, which provide the UT campus with nearly $550,000 in yearly ecological services and improved property values.

Trees can also take carbon dioxide out of the atmosphere in a process generally known as carbon sequestration. Vegetation such as trees and grassland plants remove carbon from the atmosphere and store it in their tissues, UT landscape architecture professor Jason Sowell said. UT trees provide nearly $14,000 in greenhouse gas sequestration benefits, according to myTreeKeeper.

“We need some means of reducing the amount of carbon in the atmosphere in order to mitigate these impacts,” Sowell said. “That’s something that the (myTreeKeeper) tool begins to provide monetary value to as a way to suggest just how important these (urban forests) are, not only as very beautiful spaces but also for what they provide the campus at a range of different scales.”

“There’s this amazingly big category of human health benefits that trees provide,” King said. “It’s kind of important to take a deep breath and stand back and say there’s something about big trees that cause people to feel awe and wonder.”

According to a book by University of Copenhagen researchers titled “Forests, Trees and Human Health,” trees can reduce stress in urban environments and provide spaces for relaxation and physical exercise.

James Collins, co-director of Campus Environmental Center and government junior, said the urban forest on campus, which includes native Texas trees and provides a habitat for local wildlife, contributes to UT’s identity as a campus.

“We have those really big oaks in the mall, those are really iconic to our campus,” he said. “Other than enjoying the ecosystem services they provide for us, the bit of nature that infuses into our campus can give us a balance between a really fast-paced urban lifestyle and one that interacts more with the natural environment.”

The Urban Heat Island Effect and the City of Austin

Trees cool the city by creating shade and reducing the amount of heat absorbed by buildings and pavement. Cities are generally hotter than the surrounding countryside because they are constructed mainly from materials, such as concrete and asphalt, that absorb heat from the sun and reflect it back into the air, Sowell said. He said this is called the urban heat island effect.

“Radiation is uncomfortable for us as humans, and it begins to exacerbate microclimate issues in our built environment,” Sowell said. “I think anyone who has stood in the middle of an asphalt parking lot in Austin during August can attest to that.”

“It was a program that Austin Energy decided to do to try and increase our canopy, because a more dense urban canopy means a cooler city, and a cooler city means less need for electric energy and less air conditioning,” she said.

During the summer, trees can reduce electricity usage by shielding buildings from the sun, reducing the need for air conditioning, Carse said.

Due to climate change, the city landscape will become more hostile to trees in the future, according to a 2014 report for the city of Austin by Katharine Hayhoe, an atmospheric scientist and Texas Tech political science professor. Summer maximum temperatures are predicted to increase by between 3.5 and 6 degrees Fahrenheit by the middle of this century. Days that reach a temperature of 110 degrees Fahrenheit, which are extremely rare, could increase in frequency from twice every five years to up to 12 times per year.

“In many ways, until recently (trees) haven’t been given much regard to why they’re important,” Sowell said. “But with climate change and a concern for the campus’ sustainability performance over time, factors (such as creating shade and sequestering carbon) are increasingly more important to consider more holistically for the landscape itself.”

“The same tree that might be a 10- or 15-year-old tree somewhere like Oregon might be a 50- or even 100-year-old tree here because it grows so slowly,” Perkins said. “When you remove an older tree in Austin, it takes that much longer to get it back, so it’s important to preserve the trees that we have in addition to planting more to replace the ones that we’re losing.”

In order to address these challenges, the city of Austin adopted an urban forestry master plan in 2014. The plan sets goals for the city to achieve in urban forestry and gives direction for what to do next, King said.

The Texas Forest Service at Texas A&M University collaborated with the U.S. Forest Service in a nationwide federal project called the Urban Forest Inventory and Analysis as part of the master plan. The project collected even more data than was available in 2014 about the Austin urban forest, King said.

In 2016, the Texas Forest Service took the data from the report and created an interactive website similar to UT’s myTreeKeeper called My City’s Trees that shows the annual benefit of urban trees. Many of the cities across the country who participated in the project, including San Antonio and Houston, will be added to the application in the future once their data is complete, according to Brad Hamel, a Central Texas regional urban forester with the Texas Forest Service.

“The Urban FIA report is a static look at trees in Austin and the benefits they provide,” Hamel said in an email. “The My City’s Trees (website) allows the user to look at particular trees and benefits, creating a customization that the report does not have. The interactive website, for example, can allow a user to look at how much carbon is sequestered by each major species.”

The My City’s Trees website also breaks down Austin by area of city growth and can show how much of the city has expanded and how many more trees are considered part of an urban forest since 1950. Perkins said one of the main challenges that urban forestry faces in Austin is the city’s rapid expansion. According to data from the U.S. Census Bureau, Austin’s population has increased by an average of 2.3 percent each year since 2000.

“The quicker you grow and develop, the more of the urban forest you remove just to clear away for housing,” Perkins said. “This city has very good tree protection measures, we’re actually a model in the nation for that, but even so, there’s an awful lot of the canopy that gets removed as we expand.”

When it comes to development and removing trees, Carse said cutting down many individual trees that each provide a small benefit can together have a big impact.