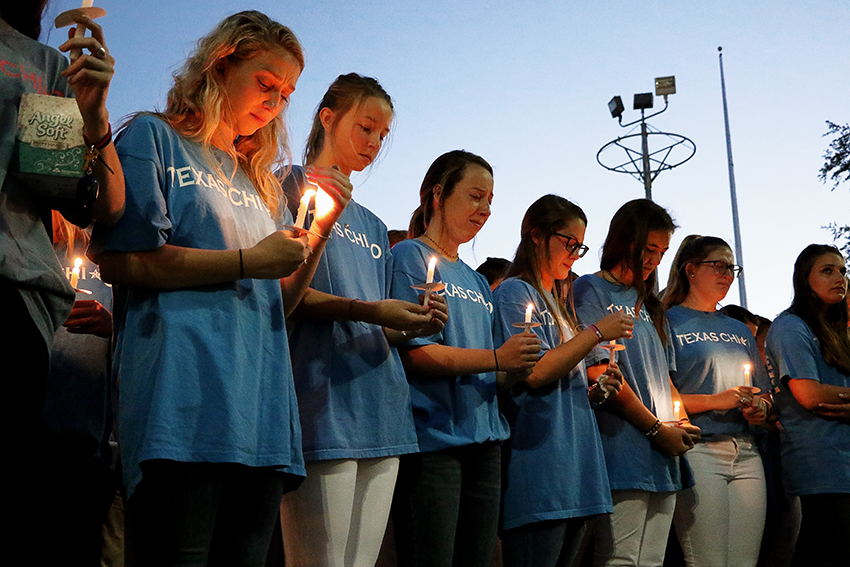 The words of “Amazing Grace” rang through a crowd of somber, candlelit faces Wednesday evening on the Main Mall, honoring the life of deceased UT junior Nancy-Jane David.

“It doesn’t make sense that Nancy-Jane was taken from this earth so soon,” public relations junior Abby Harkins, David’s best friend and roommate, said. “She is the last person that deserves this, but God truly takes his children when their time on Earth is done, when they’ve served their purpose and His. She’s home.”

David, a youth and community studies junior, was killed in a head-on collision with a school bus Monday evening while driving a moped, according to an Austin Police Department press release.

More than 300 individuals gathered in front of the Tower steps and lit candles in David’s honor at the end of the ceremony. Meg Mathias, president of Chi Omega, said the chapter has been overwhelmed by the outpouring of love and kind words about David.

“Her natural ability to make everyone she met feel cherished did not go unnoticed,” Mathias said. “This incredible woman touched the lives of so many, and this gathering just goes to show how much of an impact she had on such a large, wide array of people.”

Harkins, said she met David at freshman orientation, and they were inseparable ever since.

“It is unfathomable and heartbreaking what has happened to our sweet friend,” Harkins said. “She was thoughtful, meaningful, selfless, hilarious, sensitive and so much more. Everything that I could ever imagine in a best friend, Nancy-Jane was.”

Harkins said she will remember David as a person who loved life and lived it to the fullest.

“It was impossible to have a bad time when you were with her,” Harkins said. “I can’t event count the number of times we would be downtown and she would literally jump into the middle of a dance off. She exuded confidence and happiness.”

Harkins said David was passionate about special education and planned to become an occupational therapist to help those with disabilities. A lover of elephants, John Mayer and the Dallas Mavericks, David was a member of Silver Spurs and an assistant new member educator in Chi Omega.

“How fitting of a job for Nancy-Jane, and she did it flawlessly,” Harkins said. “She attended weekly bible studies and was the most perfect example of a Christ-following, God-loving woman I have ever known.”

Harkins said David had Proverbs 16:9, “A man’s heart plans his way, but the Lord directs his steps,” tattooed on her right foot when she was 18.

The tower bells rang 21 times at the end of the vigil in David’s honor.