Austinites participate in March for Science 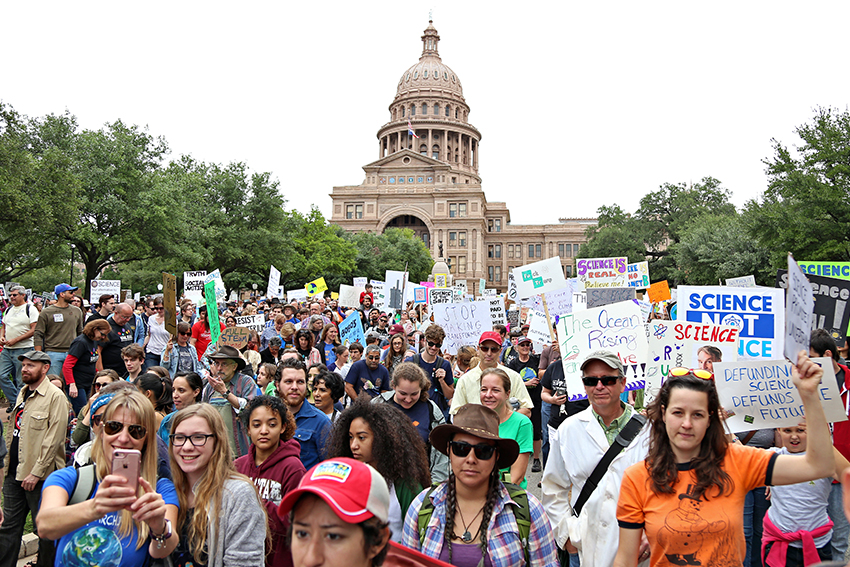 Austinites in lab coats and NASA t-shirts marched on Earth Day from the State Capitol to support scientific research and education amidst budget cuts to research-based federal agencies.

The march began at the State Capitol and ended at Huston-Tillotson University. Rachael Livermore, a UT astronomy postdoctoral fellow who took part in the march, said curiosity drives human progress through science.

“We have an insatiable need to understand the world around us,” Livermore said. “That leads to new technology that improves our lives, and sometimes that just changes how we see the world.”

President Donald Trump’s administration has proposed a 31 percent cut in spending for the Environmental Protection Agency. In response, scientists and students across the country demanded climate change awareness and regulations through the march Saturday.

The Austin march was hosted by the Texas Freedom Network, a nonpartisan advocacy group that challenges the religious far-right. According to Austin Police, about 10,000 people attended. Several signs with the phrase “There’s no Planet B” and “Science is real” rose above the crowd, and many wore shirts from their work in different scientific areas, from environmental research to computer programming.

“(The administration is) essentially taking away a lot of environmental safety, such as water,” Bruns said. “By reducing the amount of EPA funding, you’re essentially creating more opportunity for fracking and more pipelines to be built because they can’t enforce and restrict and save land.”

Administrator of the EPA Scott Pruitt, who was nominated by Trump, attended the Earth Day Texas event in Dallas on Friday. Protesters shouted at Pruitt during an onstage talk with Texas Railroad Commissioner Ryan Sitton, accusing Pruitt of stripping the EPA.

“The degree of which science is engaged with policy and programs … is huge,” Russell said. “It’s a system that affects one another, and so I’m worried (that) science-based program funding, programs that make a difference for health and well-being, will be cut in the name of saving funding.”

The march also emphasized science education in support of teaching evolution and a need for more women and people of color in the field.

Chemical engineering junior Pranab Sachithanandan said students feel more confident when they see someone of their own background leading scientific research and education.

“It’s good to have diversity across gender and across race because it helps young kids identify with someone,” Sachithanandan said. “It’s good to have more Hispanic and more African-American voices in science.”

Livermore said defunding scientific research restricts access to those who may not otherwise be able to afford an education or the resources to follow their passion in the field.

“How many Newtons and Einsteins have we missed out on because they were born in the wrong place, without the right money or without the right connections?” Livermore said. “Science and humanity as a whole benefits when everyone is able to contribute their best talents to the world.”