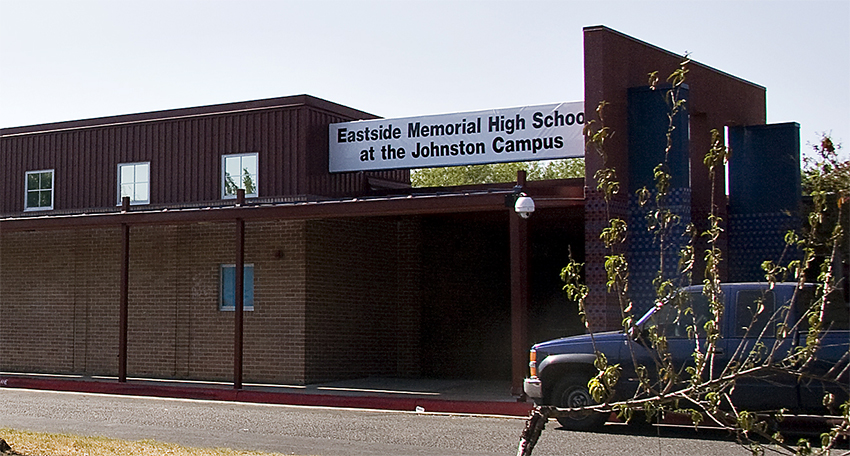 “I didn’t realize people still had a problem with race,” said Tahnee Steele, an African-American woman who graduated from a high school that no longer exists.

“(At Johnston High School) they didn’t see color,” said Steele, one of thousands of teens bused across town to attend high school on the east side of Austin as part of a court order to desegregate schools.

“I really never felt like there was a problem, until we happened to go for a band competition at a school on the far, far west side.” Steele said, “We walked up, and there was a doll hanging from a tree in a noose, and it was colored black.”

Although busing ended in 1997, Austin’s racial divide has not been solved. In 2014, UT’s Institute for Urban Policy Research and Analysis found that Austin was the only one of the ten fastest-growing cities in the country to be losing its African-American population.

Although a number of structural inequities are responsible for this, the overarching factor in all of them is that white Austinites claim we support diversity, but when the time comes to go to bat for policies that would continue to break down our racial divide, we have failed time and time again.

This has bred a climate of “hostility toward African Americans,” said Eric Tang, African and African Diaspora Studies associate professor, in an interview with KUT News last month. Unfortunately, for a city that prides itself on being liberal and weird, we also suffer from an epidemic of well-meaning bystanders.

Susan Cook, who graduated from Johnston High School in 1985, remembers those in her neighborhood expressing a lot of negativity about their kids being sent across town.

“It was not about income, that wasn’t the discussion that was being had,” Cook said. “It was about — you’re gonna be going to a school on the east side of town, and there’s gonna be a lot more ‘blacks and Mexicans’ — that’s what they said back then — and you’ve gotta be aware that these people are different.”

Many white parents evaded busing by buying property with a different address, lying on their school enrollment forms or putting their kids in private school. Since the discontinuation of busing, Austin’s legacy of segregation has returned through urban renewal efforts and the displacement of its traditional black community through the pressures of gentrification.

“Austinites can talk a mean game, but when it comes down to results, they’re not real good with that,” said Michael Attel of Johnston High School class of 1980.

Albert Sidney Johnston High, where Steele graduated from in 1986, is now called Eastside Memorial High and is one of the plainest examples of inequity in the Austin Independent School District. It has 97 percent minority enrollment and receives a 15.2 out of 100 on college readiness scoring.

I interviewed seven Johnston alumni who were bused from all over the district. Five identified as white or Caucasian, one identified as Hispanic and one as African-American. The general consensus was that being exposed to diversity in high school helped them in the long term, even if they didn’t realize it at the time.

Despite expressing the sentiment that diversity is a necessity, many of the white interviewees said they benefited from, or participated in, gentrification to some extent. It seems that, once they stopped seeing the way inequity affected their peers, it was easy to become a bystander to the re-appearing divide.

When telling me about the choices she made for her own child, A.J. Bunyard, who graduated in 1987, realized that, to some extent, transferring her daughter to Highland Park Elementary contributed to the decline of public schools in Dellwood where they lived at the time.

“I guess I did what all those other parents did, so she wouldn’t go to the neighborhood school.” Bunyard said, “Putting it in context with my experience, I’ve never juxtaposed those together before.”

“As soon as they quit busing, (Johnston) went to shambles,” said Brad Koen, class of 1988. What happened to Johnston High is just one example of how Austin has reverted since the end of busing.

But what happened to Johnston High does not have to be what happens to the greater Austin community. There is still time.

In March, Tang told KUT he found something surprising in a survey of approximately 100 former East Side residents: A majority said they would come back to Austin if they were able.

In the 80s, the federal government required busing for desegregation in a political climate that’s not likely to happen again, so we must ask what Austin is willing to do as a community.

The map for Austin’s new zoning guidelines, Code Next, will be revealed this week. This is likely our last chance to step up to the plate.

If Austin chooses to reign in developers, set up programs that make it advantageous for people to stay in their family homes and actively build neighborhoods that welcome and value racial diversity, we can change our trajectory.

“I see what’s happening to this whole country,” Steele said, “the racial divide is getting bigger and bigger, and I just want people to care.”

MacLean is an advertising and geography sophomore from Austin. She is a senior columnist. Follow her on Twitter @maclean_josie.