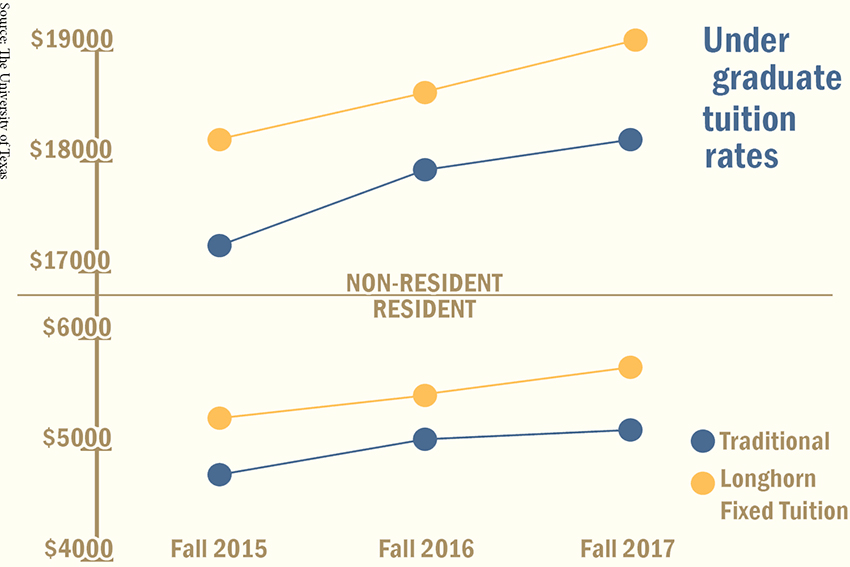 The cost of attending a public university has been closely examined with the recent passage of Senate Bill 19 out of the Texas Senate.

The bill, if approved, would stop increases in college tuition for the next four years. UT tuition increases in 2016–17 and 2017–18 will go toward Student Success Initiatives, faculty salaries and other programming, but many students are still unaware about tuition raises and its allocation.

In a February 2016 letter to the UT System, President Gregory Fenves addressed a decision from the UT Board of Regents to increase tuition for the 2016-17 and 2017-18 school years by 3.1 percent and 3.0 percent for each year respectively.

“We will use the new funds to continue improving undergraduate student success through advising, counseling and support programs that help students graduate in four years and, ultimately, spend less on tuition,” Fenves said in the letter. “Revenue from the tuition increase will also allow us to recruit and retain top faculty members to work directly with students and help them receive a world-class education.”

One of the University resources that helps with this goal of helping students graduate in four years is the UT Student Success Initiatives, which began in 2013.

Carolyn Connerat, associate vice provost of Student Success Initiatives, said a lot of what they do is work with colleges and schools to develop students and ensure a small-group community. They also provide consistent programming for all entering students, which could take the form of a First-Year Interest Group, honors programs or
other groups.

“Since then, each year we’ve added more programming to make sure that not only every incoming freshman class had resources, but as that initial group — that 2013 group — as they progressed to become seniors, that we would have additional programming for them,” Connerat said. “That included everything from our Graduation Help Desk … to Senior Countdown.”

Marketing senior Binna Kim, former student body vice president, served as the Student Services Budget Committee chair this past year. Kim said the committee tries to make sure that this money is being allocated correctly and caters to student needs.

“When we’re making these decisions and we’re talking about voting power, the students truly do make the decisions,” Kim said. “We’re leading the conversation. That’s a $42 million budget that our university puts in the hands of students, because they believe that the money should be allocated by the priorities of the students.”

Although students such as Kim are aware of tuition allocation, there are many students who still don’t know about the increases and distribution of tuition.

“Sometimes you just think it’s in the air — here’s all my money, and I don’t really know what it’s going toward,” education freshman Laura Palmer said. “No one really advertises what it goes toward — you just pay the bill and then you’re done.”