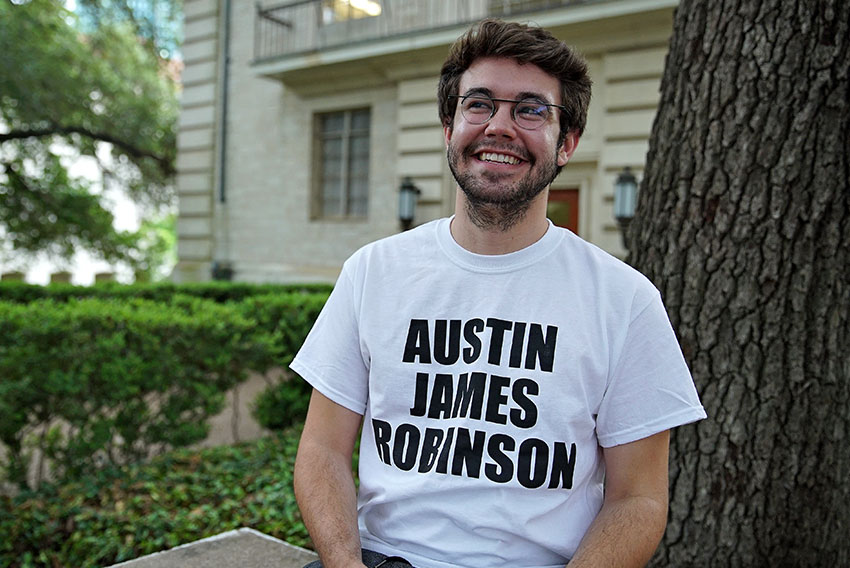 A ghostwriter writing for fame by ghostwriting for other famous ghostwriters is the premise of Connor Gleim’s new book, ghostwritten for him by his friend Austin Robinson.

UT alumnus Robinson ghostwrote “The Ghostwriter’s Ghostwriter: How I Became a Ghostwriter’s Ghostwriter,” a novel chronicling the fictional ghostwriting career of his friend and advertising senior Connor Gleim. After graduating this past December with degrees in English and youth and community studies, Robinson said he was inspired to write the book when comedian Nathan Fielder employed a ghostwriter to pen a fake motivational workout book for his show, “Nathan for You.” Robinson brought up the episode to Gleim, who suggested Robinson follow in Fielder’s lead by ghostwriting a book for him.

Robinson said the project itself required arduous research on the logistics of writing an actual book. But when it came down to it, Robinson said writing the 136-page book took him only 10 days.

“I was really inspired by Nathan Fielder,” Robinson said. “He only gave his ghostwriter a few days to write a much longer book.”

Gleim said he contributed some ideas for the story and cover design, but let Robinson handle the rest.

“The story set him ablaze with passion,” Gleim said. “He’s a great writer in general, and he has an interesting view of the world.”

Robinson has always found wacky outlets for his creative flair and loud personality. Before becoming a published author, he said he wrote so much comedy that his friends believed he wrote for Texas Travesty, even though he had never worked for that publication.

Robinson said he has also invested his creativity in other ventures such as his own T-shirt brand and an energy drink he marketed.

“It’s really funny because none of those things were ever in my plate of things I wanted to care about or do,”
Robinson said. “People would come to me and say, ‘You’re a genius at marketing.’ And I was like, ‘Oh my god, thank you!’”

Ads he released for the energy drink, H20, feature the drink in anachronistic settings, an element Robinson said he added because it was so funny and quirky. The T-shirt brand he started simply has his name written in bold lettering.

“When marketing my products and my brand I think, ‘How can I make this totally me?’” Robinson said. “My personality is definitely in my brand, my marketing style and my products.”

Robinson said he took the same approach in writing “The Ghostwriter’s Ghostwriter.” The book is filled with meta-humor and a wacky storyline that reads like an article from Texas Travesty.

This absurdist humor is introduced with the book’s dedication, which memorializes Gleim’s roommate, mechanical engineering senior, Marshall Geyer, whom the book
falsely states was killed by a truck collision while also battling a
life-threatening illness.

“I was glad to be a part of the dedication, and if I were still alive I would have read (the book),” Geyer said.

Before inspiration for the book stoked his passion, Robinson had been looking for a job as a case worker to supplement his study in youth and community studies. His plans haven’t changed, but he is now looking at more options including graduate school and professional ghostwriting programs in California.

“I was all over the place,” said Robinson. “And I still sort of am, but I am getting back on my feet. Of course, I want to be a writer, but right now it’s sort of a serious hobby.”