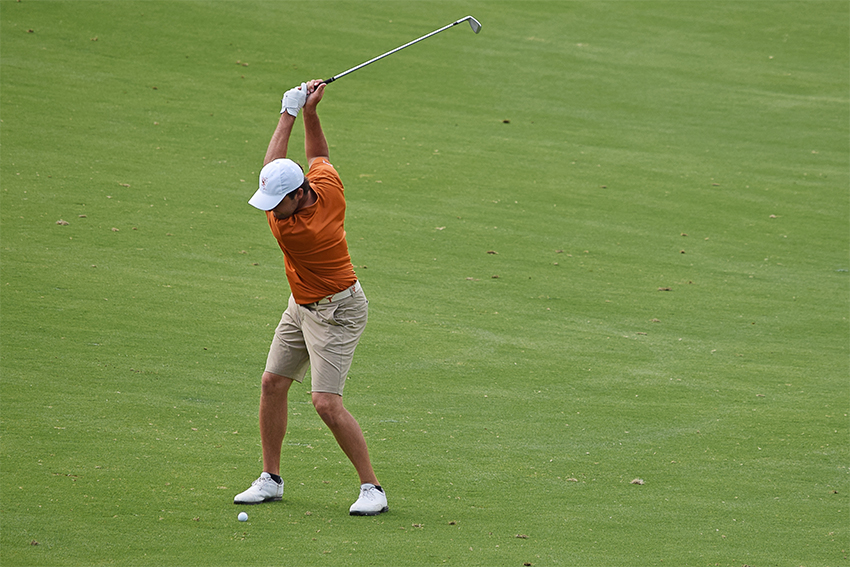 The last several years for sports teams on the Forty Acres have been somewhat inconsistent compared to what Texas fans have become accustomed to.

The baseball team parted ways with the winningest coach in NCAA history last spring after another uninspired season. Texas basketball just finished its worst season in 34 years at 11-22. And the once mighty football team has been stuck in a rut of mediocrity since the days of Colt McCoy.

However, through all of this pedestrian play and coaching turnover from the big three sports on campus, the men’s golf team has been a paradigm of consistency – winning a national championship in 2012 and adding four straight Big 12 titles since.

On Wednesday, they made it five straight.

The No. 18 men’s golf team closed out the Big 12 Championship with a final-round 298 to defeat No. 2 Oklahoma State by one stroke.

The Longhorns erased a six-shot deficit during the final round to win their eighth overall Big 12 title.

The tournament came down to the final holes with Texas using solid play on No. 17 to clinch the victory – including a crucial eagle from senior Gavin Hall. They were 5-under as a team on the hole, three better than Oklahoma State.

“I think we played 17 5-under-par and that gave us a chance to get back in the tournament,” said head coach John Fields. “Oklahoma State is a great team. They’re coached incredibly well. It just came up for us this time. Our guys finished really well.”

Hall has now won a Big 12 Championship each of his four years on campus. The senior finished in 22nd at 19-over, but he led the tournament in eagles – including a three on the penultimate hole that put Texas in the lead.

Juniors Doug Ghim and Scottie Scheffler led the way for Texas as they tied for second place at 8-over. Ghim shot 70 in the final round, including birdies on No. 17 and No. 18 to clinch the victory.

Scheffler closed with a 73 in the final round, but a strong second day of the tournament got him back into contention. He shot 77 on day one, but
followed it up with rounds of 68 and 70 on day two.

Texas was in sixth place after round one after they shot 313–11 shots behind leader Oklahoma State — in difficult conditions. But they came back on day two and posted 274 and 283 to tie Oklahoma State for the lead heading into the final round.

Timely play from Steven Chervony and Spencer Soosman was crucial for the comeback. The underclassmen each shot rounds of 68 and 75 on day two as Texas climbed back into the tournament. Chervony finished tied for 28th at 22-over and Soosman finished tied for 32th at 26-over.

Fields was impressed by the way his team has come together at the right time. After last season’s heart-breaking defeat in the national championship, this year was supposed to be a rebuilding effort.

“After losing Beau Hossler last year and revamping this team, these guys have had to assume a lot of pressure because we have won four Big 12s in a row,” Fields said. “So to come in here to Prairie Dunes, a great golf course, incredible circumstances and difficult conditions, I’m really, really proud of our guys.”