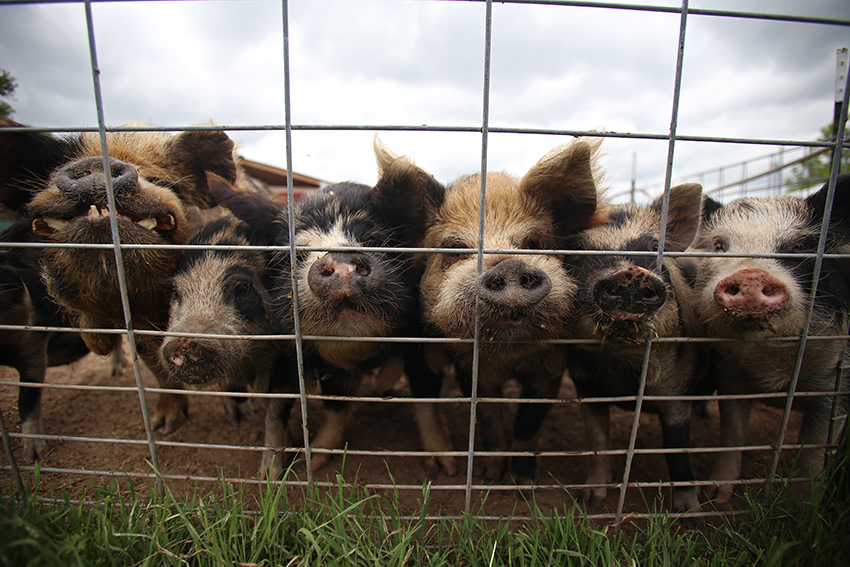 Two and a half years ago Dan and Brittany Illescas discovered the realities of the pet pig market when they themselves set out to adopt a pig. Illescas estimates that in Central Texas there are around 20 to 30 pig breeders currently selling “teacup” or “micro” pigs — which are really just potbellied pigs who’ve been weaned from their mothers’ milk several weeks early. A “size guarantee” often accompanies the pigs when they’re sold, claiming that the pigs will not grow to weigh more than 40 or 50 pounds. In reality, however, it is difficult to predict how large a properly fed pig will grow to be.

“Pigs are a novelty,” Illescas said. “They’re seen as an exotic pet.”

Because of the demand for pigs, Illescas said there are a number of piglets who are bought and then given up by their owners after they realize they cannot care for the pigs.

“At any one time, I’d say there are about 75 to 85 posts on Craigslist, where it’s illegal to sell animals,” Illescas said.

After searching on Craigslist, the pair came across a potbellied pig named Eleanor, who was in need of a new home after a barn flood. The Illescas decided to rescue the healthy, two-month-old pig, but were unsure of what to do when she began to exhibit strange, self-
isolating behaviors.

“We spent six months not really knowing what to do, but then we realized that (Eleanor) was just lonely,” Illescas said.

The couple returned to Craigslist to see if they could rescue another pig to serve as a companion to Eleanor. Soon after adopting another potbelly named Franklin, Eleanor’s demeanor improved considerably.

About a year later, the couple came across a Craigslist post for a “teacup” pig that weighed 11 pounds.

“That was Annie,” Illescas said. “She was severely malnourished (and) underfed.”

After getting surgery to correct a dislocated hip due to malnutrition and eating a better diet, Annie now weighs a little over 40 pounds.

“(Annie) is the reason we started the rescue,” Illescas said. “She taught us that people didn’t know what they were doing. They were taking advice from people who did not have the animals’ best interest (in mind).”

With three pigs and counting, the Illescas reached a point where they realized they didn’t have a choice but to get involved in pig rescue.

The couple put their house on the market and started looking for a larger property outside  the city. Over three months, Dan converted three acres of empty space into a heaven for rescued pigs, complete with mini pools and custom-designed pig huts.

“We said to ourselves, ‘We have to do something about this,’” Illescas said. “We cannot sit idly by as everybody goes through and makes all of these mistakes and then at the end of these mistakes, says, ‘Oh, this pig’s not right for me.’”

Stephanie Cordelle had the opposite problem: She was looking to buy a pig, not give it away. While searching Craigslist, she stumbled upon several postings for pigs being sold around Austin. One in particular got her attention: a 1-year-old pig named Hamilton. 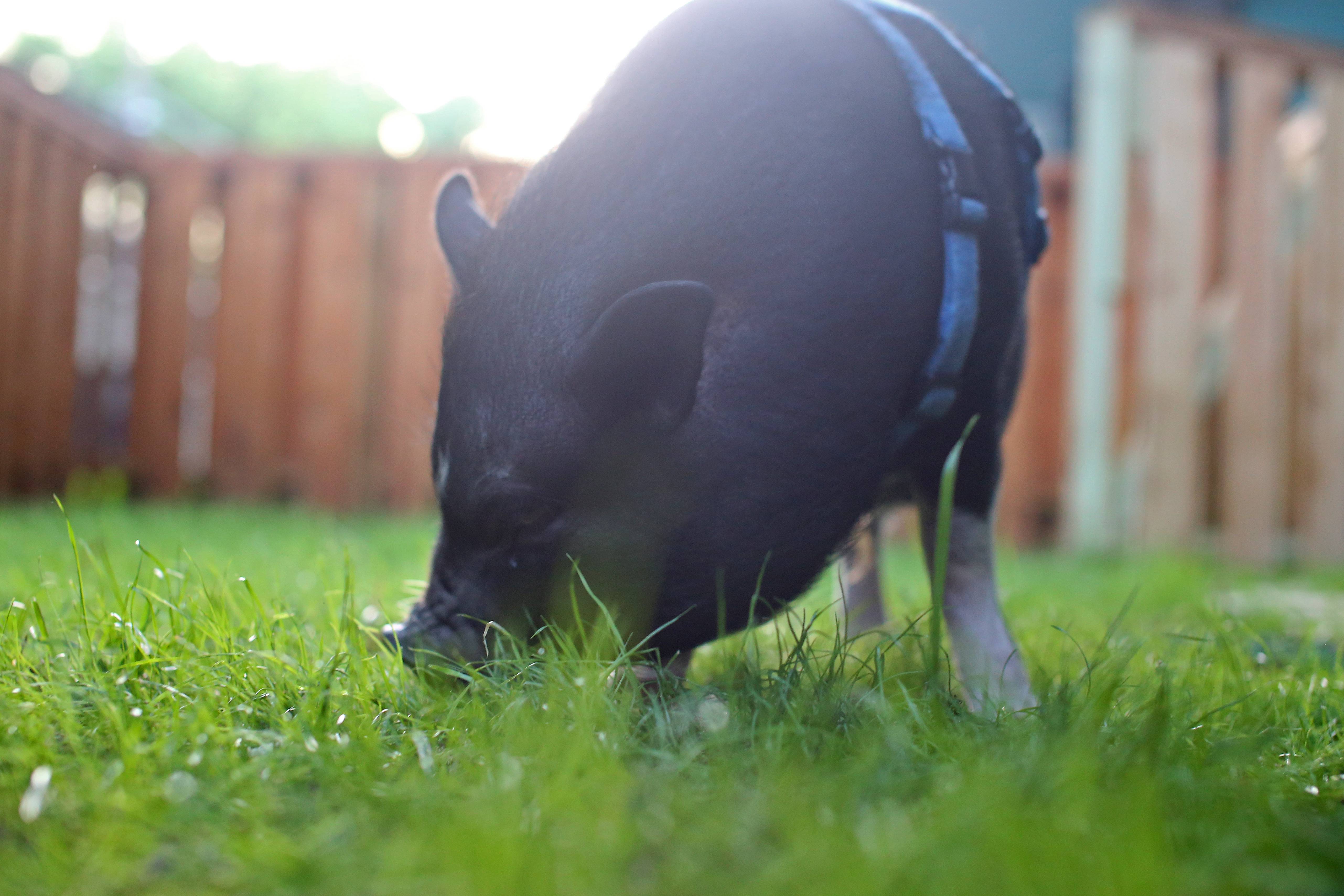 Cordelle met with Hamilton’s owner, who was trying to re-home the pig after she could no longer take care of him properly, and took the pig home that same day. But after a week of flipped tables, aggressive behavior and a destroyed backyard, she turned to Google for help.

“He was not what I expected,” Cordelle said. “(Hamilton) requires just as much attention as a dog does.”

“When I found (CTPR), I emailed them and asked, ‘Hey, can I bring in my pig?’” Cordelle said. Illescas said while Cordelle couldn’t bring in her pig, he would help her work through the problems she was facing with her current situation. Kristen Auerbach, an officer in the Travis County Department of Animal Services, said every month a few pigs of varying types are brought in to the Austin Animal Center by owners who are attempting to surrender them. Unfortunately, the Center cannot accept these pigs since they are considered livestock. However, Auerbach said this isn’t necessarily a problem.

“What we advise is that pet owners really read about and understand the care needs of their pets (regardless of the type of pet),” Auerbach said.

Cordelle said she now recognizes that she was uninformed about the nature of pig ownership prior to buying Hamilton, and laments the lack of information available to pet pig owners. 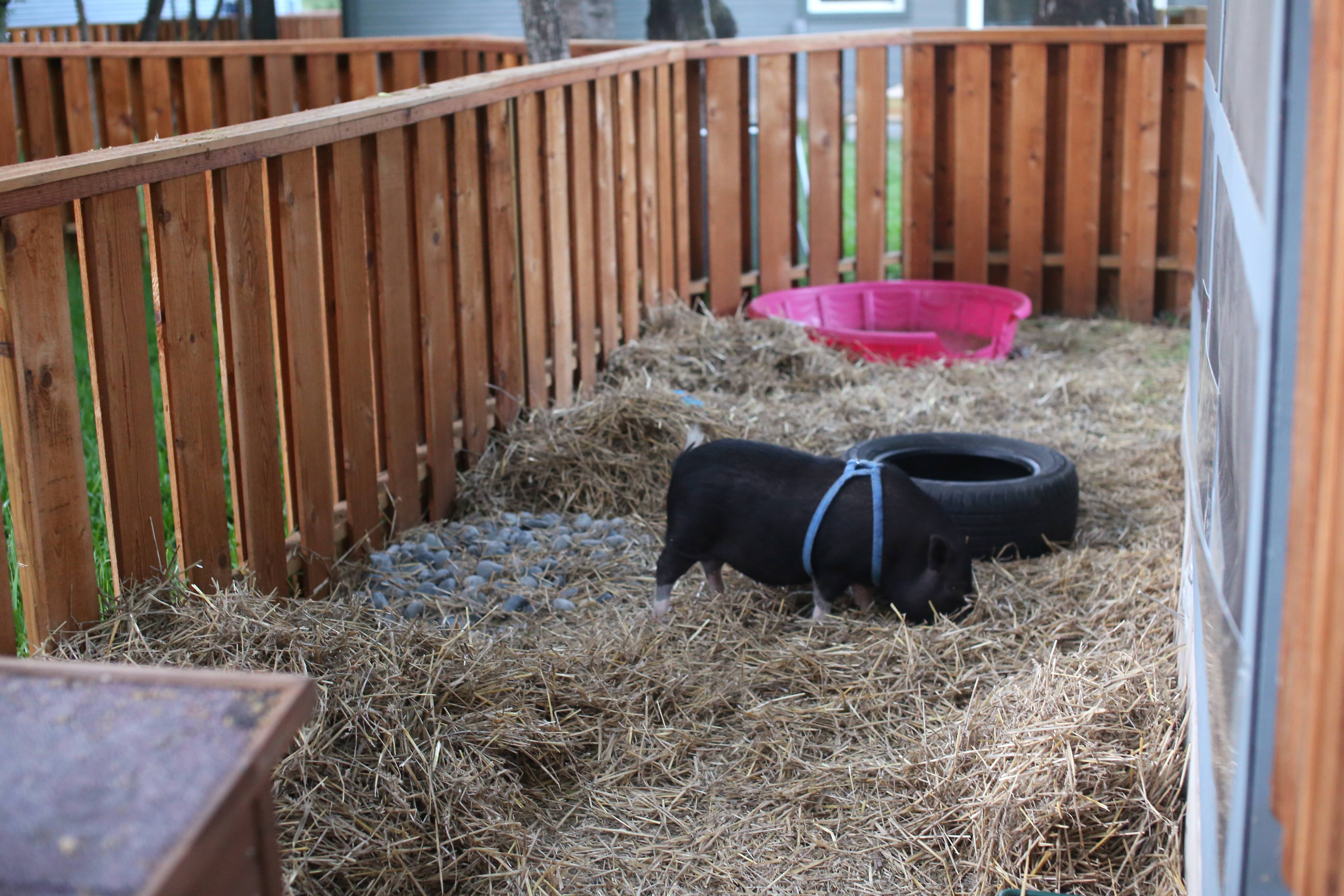 Despite the issues that have resulted after Hamilton’s adoption, Cordelle says that she doesn’t regret her decision.

“Everything is solvable that I thought wasn’t, (and) everything has a solution,” Cordelle said. “It just requires patience and consistence, which is really hard to come by in my life, let alone with a pig. But it’s
worth it.”