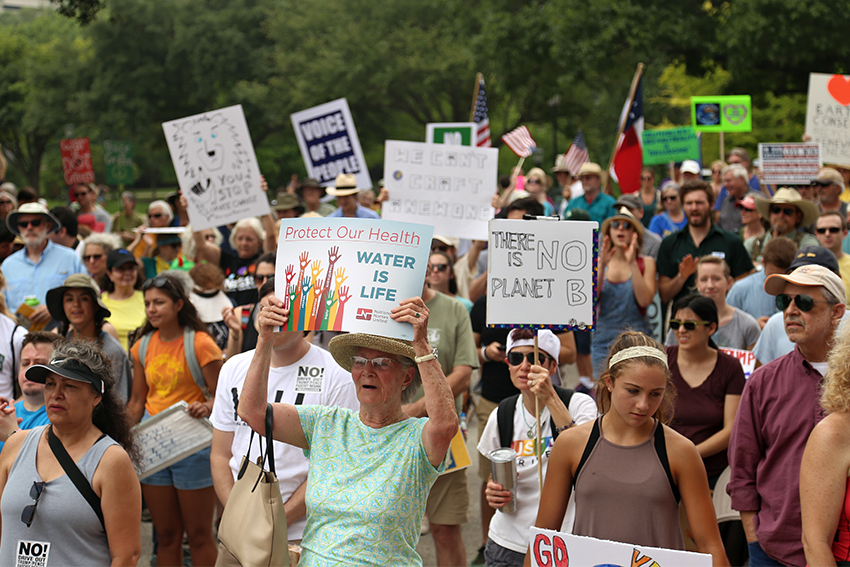 Environmental groups held the event Saturday to spread awareness of several aspects of climate change, as well as encourage Texans to influence policymakers who ignore or deny the urgency of the issue. The rally was followed by a march to the University of Texas.

“In just 100 days in office, (Trump) has launched an assault on the climate, public lands … and the political agenda of the Trump administration is an attack on all species, including humans,” said Jessica Herrera, media specialist for the Center for Biological Diversity, who spoke at the rally. “The truth is climate change is real. We only have one planet and we are all at risk.”

Hundreds of protesters attended the rally, including speakers such as Austin Mayor Steve Adler and Congressman Lloyd Doggett.

“The most pressing threat that our planet faces is climate change,” Doggett said. “What we need is alternative energy, not alternative facts. We have a state leadership that deny the climate, and I’m not real sure where they are on gravity.”

The rally was one of several around the country sponsored by groups like 350 that organize projects and campaigns focused on climate change. 350 Austin member Jacob Martinez said it is important for politicians to recognize climate change, especially in Texas.

“If we change Texas and our energy policy, we change the entire United States,” Martinez said. “We would just like policymakers and people in the government to acknowledge science for what it is and make policy to help shape that. If they were to do that, addressing climate change would be solved sooner.”

After the rally, marchers made their way to UT, protesting the University’s involvement in the oil and gas industry in West Texas.

Education graduate student Andrew Costigan, who attended the event, said the school should be supporting alternative energy rather than fossil fuels.

“The University is well-entrenched in this industry that is responsible for what could be the demise of civilization on Earth,” Costigan said. “That doesn’t seem so smart for one of the best universities in the world.”

Costigan, who is part of the Climate Change Action Committee on campus, said he wants to get more students involved with the issue.

“Addressing climate change could really spur a lot of growth and prosperity in this country,” Costigan said. “I think we can figure it out if we can put our heads together.”