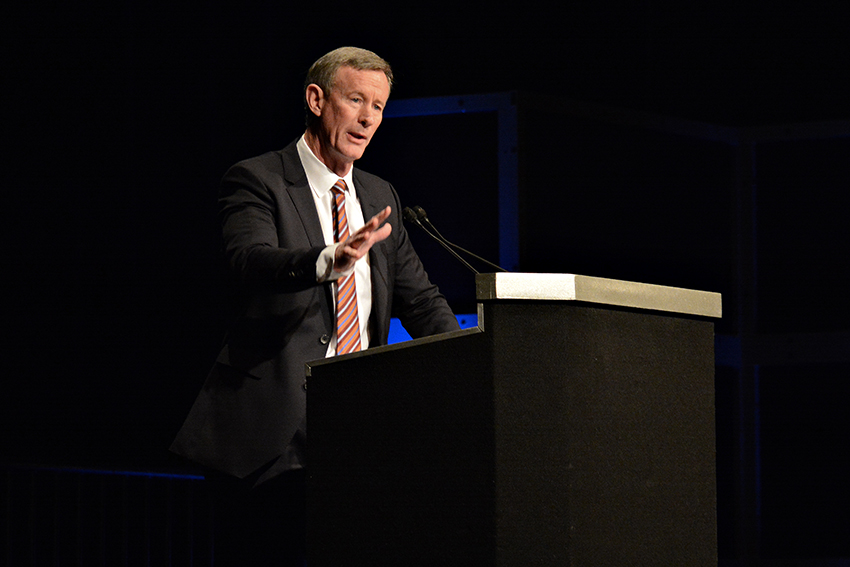 As a four-star admiral in the military, Chancellor William McRaven said Friday afternoon he was surprised to learn of widespread sexual assault within the Special Forces, a revelation which led to his desire to study sexual assault at UT.

McRaven detailed his journey from confronting sexual assault in the military to battling it at UT during the annual State of the System address during the Chancellor’s Council Annual Meeting and Symposium.

Often, people don’t like to talk about sexual assault because no matter what, “it’s going to be ugly,” McRaven said. However, he said the issue needed to be dealt with by taking an in-depth introspective consideration into how it plagues the System.

“Everyone will recognize that there is more work to be done,” McRaven said. “We were doing good work on the campuses ­— make no mistake about that — but we know we can do better.”

McRaven also delivered an update on Quantum Leaps, his plan to slingshot the System to the cutting edge of higher education. The program’s tenants are “ambitious, but straightforward” in order to improve student success by removing financial barriers, lack of engagement and inadequate counseling as obstacles, McRaven said.

“At the end of the day, putting young people on a path to a good life is job number one,” McRaven said. “I have challenged our leaders to overturn orthodoxes, to take risks and most of all collaborate with each other.”

Even after a decade of improvements, McRaven said the University still falls short in equitable hiring practices. Under the fairness and opportunity branch of Quantum Leaps, McRaven said qualified women and members of underrepresented groups “are among the final candidates considered for every senior-level positions.”

“Already in the last year and a half, we have seen the benefits of this approach,” McRaven said. “At the same time, we are working hard and thinking hard about how to close the gender pay gap across the UT System. We want to be sure that all things being equal, (that) the same work receives the same pay regardless of gender.”

To confront this, Cigarroa said he went to visit UTMB immediately following the hurricane to reassure the people there that revitalizing the oldest medical school in the state was a top priority.

“(Now) UTMB is stronger and more vibrant than ever before,” Cigarroa said.

Phillips also addressed the issue of free speech on college campuses. He asked Yudof, an expert in free speech, about how it can function in relation to hate speech. Yudof said, for the most part, “disgusting, terrible speech” is constitutionally protected. Due to this, he said responsible discourse on controversial ideas is essential.

“I don’t like these ideas of sanctuaries and safe places from speech,” Yudof said. “I want students to be safe, but not safe from ideas ….It’s the obligation of the University to protect speakers from the left, right and center, and let them have their say.”