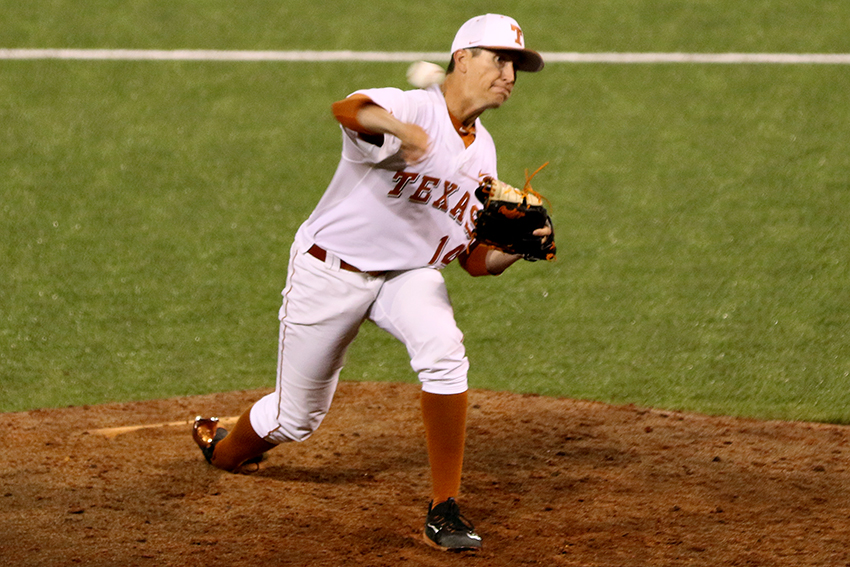 The closing pitcher of a ballclub bears the heavy responsibility of shutting down the opposing team’s offense when the end of the game draws near.

His success is solely measured by his ability to preserve the lead and secure the victory, even when his team’s advantage may only be a difference of one run in the game.

For these reasons, one would expect the pitcher most suitable for the job to be an aggressive thrill-seeker both on and off the field.

But that isn’t the case for the Longhorns’ designated closer. Sophomore Beau Ridgeway has ignited the back end of the Texas bullpen this season, all the while having one of the calmest personalities on the squad.

“It’s funny,” pitching coach Phil Haig said. “He’s a very laid-back kid, which is very opposite of what you would think of a closer, of the adrenaline freak, the adrenaline junkie. … (He) talks about fishing and hunting more than anything else, and then it’s game time, and he’s ready to go.”

Perhaps it is actually a similar composure required in fishing and hunting that allows Ridgeway to excel in pitching when the decision of the game is on the line. Despite not realizing his aptitude for the closing role until the start of this season, Ridgeway has quickly become the hottest hand in the Longhorn bullpen — he’s made the most appearances (26) on the mound and has maintained a team-best 1.47 ERA.

“Honestly, I had no idea what I was going to do coming into this season,” Ridgeway said. “I talked with our pitching coach, coach Haig, and he told me I needed to be ready to start, relieve, close, so I was ready for it all.”

Haig, who has been a mentor to Ridgeway this year, realized that the sophomore was ready to take on the responsibilities of the closing position when he observed Ridgeway’s fast recovery process after one outing in order to be available for the next. Ridgeway’s ability to make quick turnarounds is crucial to his game since his personal motivation stems from desiring to pitch in as many games as possible.

“He’s ready at all times,” Haig said. “He recovers really well, he commands his fastballs as good as anybody, and truly, if it was up to him, he would pitch in every single game and never take a day off. He takes care of his business before (the game) — his arm, his body — and whenever we look down and yell, ‘Ridgeway!’ he knows exactly what he’s got to do.”

Ridgeway’s rapid emergence as a reliable closer has become undeniable around the country. On April 26, he was named to the 2017 Stopper of the Year Midseason Watch List, as announced by the National Collegiate Baseball Writers Association.

After earning his 10th save of the season during last Friday’s 5–4 win over Oklahoma State, the right-hander joined another elite list of closing pitchers — he became the first Longhorn closer to record double-digit saves since Corey Knebel in 2011.

Although Ridgeway has earned national recognition for his breakthrough performance this season, he humbly attributes all of his success to the other eight Longhorns on the field playing defense alongside him.

“One hundred percent, it’s our defense,” Ridgeway said. “Going out there, being on the throne, having confidence in the guys behind you going to make plays, makes life a whole lot easier as a pitcher. I know my defense, my guys behind me — they’ll make every play so I can just throw strikes and let them do their job.”

When the Longhorns host UT-Arlington at UFCU Disch-Falk Field tonight at 6:30 p.m., they’ll know exactly who to call to the mound when the game is on the line.

“I love the pressure, I love being in the moment,” Ridgeway said. “Coach (David) Pierce always talks about the moment of truth, going in whenever the game’s on the line, and that’s my favorite.”