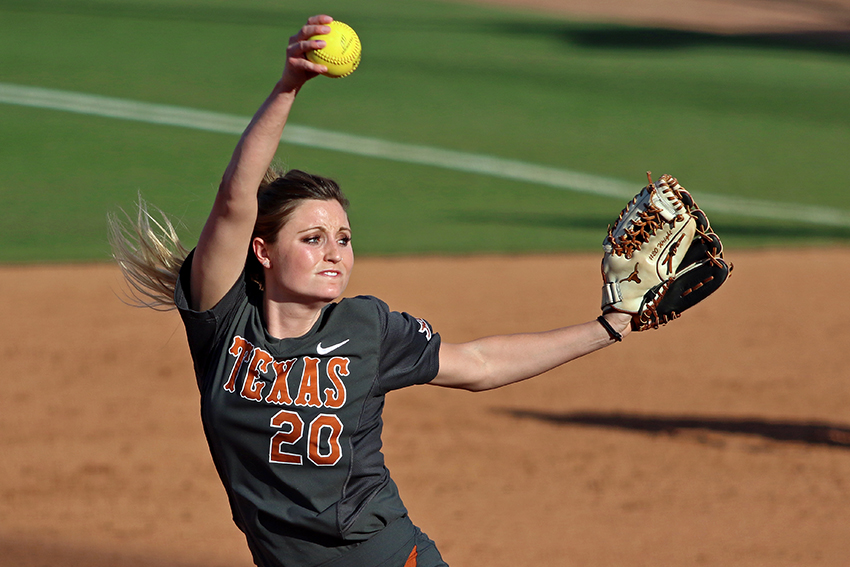 In a season full of plenty of positives and a handful of negatives, the end of the schedule nears as the Longhorns clash with the Islanders of Texas A&M-Corpus Christi on Wednesday afternoon.

The Longhorns enter the matchup boasting a record of 28-20, clinching a spot in the Big 12 Tournament after sweeping Kansas last weekend in a rain-shortened series. Additionally, the team is on the heels of a three-game win streak that dates back to last Wednesday’s triumph over the North Texas Mean Green.

“I think we need to just keep having fun,” sophomore outfielder Bekah Alcozer said. “We just need to keep doing what we know how to do.”

One of the more effective parts of the roster in the past couple games is the pitching rotation. Redshirt sophomore Erica Wright tossed a one-hit shutout in the first game of Friday’s doubleheader against Kansas, two days after a strong outing against North Texas — both games resulted in victories. Wright received a boost from the offense in these contests, solidifying a 6-0 win over the Mean Green and a 10-0 win over the Jayhawks.

Wright was not the only University of Texas pitcher to toss a shutout complete game in the Kansas series. Senior Tiarra Davis threw a seven-inning, nine-strikeout performance during the second game of the doubleheader, lifting Texas to a 2-0 victory.

“I think the pitchers are phenomenal,” Alcozer said. “I think they’re going to be doing great things going forward. They’ve been doing really good in practice and everything.”

The power returned to the Longhorns’ bats as well. Before the win streak, the team had not hit a home run since the Texas Tech series over two weeks ago. But since the streak initiated, Alcozer has hit two home runs, while senior Celina Felix also added one of her own. Additionally, the team is not struggling to collect hits during this successful run.

“I just think we need to take the same energy we brought into this weekend’s game,” Alcozer said. “We had phenomenal energy in the dugout. We get a lot of hits and it’s like you can barely hear yourself think because everyone is so excited.”

With one final midweek game against Texas A&M-Corpus Christi and one Big 12 series against Baylor remaining on the schedule, there is plenty to play for heading into the postseason. Texas is granted several more chances to bolster its tournament résumé in the final week of the regular season.