“Guardians of the Galaxy Vol. 2”: twice the size, almost twice the fun 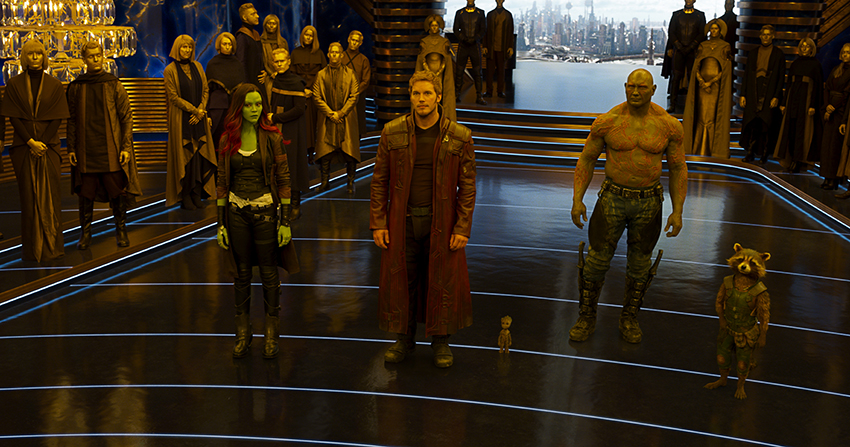 The first “Guardians of the Galaxy” was a gamble. And yet director and co-writer James Gunn opened the picture with such vigor and wit that he grabbed the attention of moviegoers around the world. Suddenly, a space raccoon and a talking tree aren’t so silly anymore — they’re beloved superheroes.

Returning director Gunn uses his hard-earned goodwill in “Guardians of the Galaxy Vol. 2” to explore just one, very trippy concept: a living planet called Ego. He’s got thoughts and feelings like regular people, but he also has godly powers. To make things weirder, this planet also has a human form played by Kurt Russell. In his human form, Ego traveled to Earth and fell in love with the mother of Peter Quill (Chris Pratt) in 1980.

Fast forward to 2014, and the Guardians of the Galaxy meet Ego’s human form after a battle that destroys their ship. Ego wastes no time introducing himself as Quill’s father, and he offers to take him to his planetary body. Quill, along with Gamora (Zoe Saldana) and Drax (Dave Bautista), take him up on his offer. There, they encounter gorgeous, colorful vistas, and Quill learns that he has the same god-like abilities as Ego. Slowly, his resentment toward his absent father fades.

Meanwhile, Rocket Raccoon (Bradley Cooper) and Baby Groot (Vin Diesel) stay behind to repair the ship. They are captured not long afterward by Yondu (Michael Rooker), the alien who raised Quill and the leader of the Ravagers. But Yondu soon becomes a prisoner of his own men when he refuses to turn in Rocket for a hefty bounty.

At this point, any further discussion of the story will spoil the truly gut-wrenching twist that “Vol. 2” has up its sleeve. It’s certainly a more emotionally affecting film than the first “Guardians,” exploring the emotional scars that drive its dysfunctional heroes to continually fight one another. The large ensemble cast brings their A-game to the drama, humor and action, and Gunn allows formerly minor characters the chance to become fan favorites. The characters all have great human moments, such as when Quill calls Rocket a “trash panda” in the midst of an argument, or when Ego and Quill play a game of catch with a ball made of pure energy.

But with such a vast array of characters split between the Guardians, the Ravagers and the pretentious aliens called the Sovereign, “Vol. 2” has trouble finding its groove. An unwieldy number of storylines run concurrently in the second act, forcing the narrative to sideline Quill’s journey in order to track the personal growth of Yondu, Rocket, Gamora, Drax and Nebula (Karen Gillan), a villain from the first movie. As a result, the middle section of “Vol. 2” noticeably lacks forward momentum in spite of strong writing.

When “Vol. 2” eventually rallies its characters for its final stretch, it also resolves the first film’s biggest problem: the lack of a good villain. No one who sees “Vol. 2” will have that complaint.

“Vol. 2” serves up another great “Awesome Mix” as well, using Electric Light Orchestra’s “Mr. Blue Sky” for a laugh-out-loud opening sequence and George Harrison’s “My Sweet Lord” for a scenic trip around Ego’s planet. The film also aims to bring out the tears with Cat Sevens’ “Father and Son,” which closes the story with immense poignancy. At its heart, “Guardians of the Galaxy Vol. 2” is just as much about familal bonds sealed by fate as those sealed by blood. Quill might have spent most of his life longing for a father figure, but he discovers in the end that he had a father all along.

“Guardians of the Galaxy Vol. 2”