The Daily Texan • May 4, 2017 • https://thedailytexan.com/2017/05/04/students-express-concerns-over-confusion-surrounding-classes-exams-during-on-campus/ 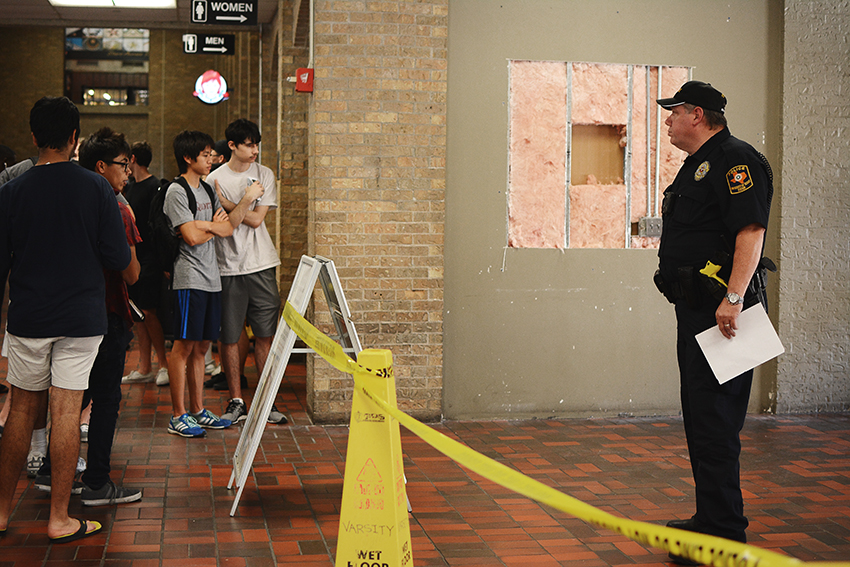 Minutes after four students were stabbed Monday afternoon on campus, many students still went to class and some took exams in the midst of confusion about the ongoing violence around them.

According to the UT Police Department, officers received reports of the stabbings around 1:46 p.m. Monday and arrived to the scene about two minutes later. However, students were not officially excused from classes until 3:20 p.m., when Provost Maurie McInnis sent an email to the University canceling classes and events for the remainder of the day.

The gap of time in between the incident and the cancellation left students and professors worried about how to continue their scheduled activities for the day while processing what had just occurred.

“We were all just kind of staring at each other like ‘I can’t even believe we’re having a test right now in the middle of this,’” government junior Bailey Sharp said. “‘Why is UT not shutting down campus right now? This is insane.’”

Sharp said she heard about the stabbings from her peers while studying for a Spanish exam inside Mezes Hall. Sharp said she was scared and unsure about what was happening in close proximity to her classroom, but her professor still expected students to take the exam from 2 to 4 p.m.

Joey Williams, communications director for the provost’s office, said the President’s Crisis Response Team makes decisions to cancel class based on facts available at the time on a case-by-case basis. However, he said faculty members do not need permission from the University to cancel class.

“When it comes to classes, faculty really do have very wide discretion in how they handle their classes and whether they’re canceled,” Williams said. “It’s gonna be their judgment as to what they can and what they’re willing to do.”

Jossianna Arroyo-Martinez, chair of the department of Spanish and Portuguese, said in an email that she believes the University’s decision to cancel classes more than an hour after the incident was unfortunate.

The department of Spanish and Portuguese declined to comment as to why class was still held and an exam was given.

“I’m so disappointed with the department of Spanish … why they allowed us to keep following through with the test when these horrific things are happening,” Sharp said. “It’s kind of like a slap in the face to us all.”

While no make up exam has been offered for students in Sharp’s class, Arroyo-Martinez said the department will discuss possible ways to accommodate students.

“We are now looking for alternatives as well as counsel, as many of our students, professors and instructors are pretty upset by these sad events,” Arroyo-Martinez said in an email.

Williams said the University has no policies requiring professors to offer make up exams or extensions to students. He said the Provost Office sent out emails encouraging faculty members to offer support to students through implementing adjusted class procedures such as creating curves and extending deadlines.