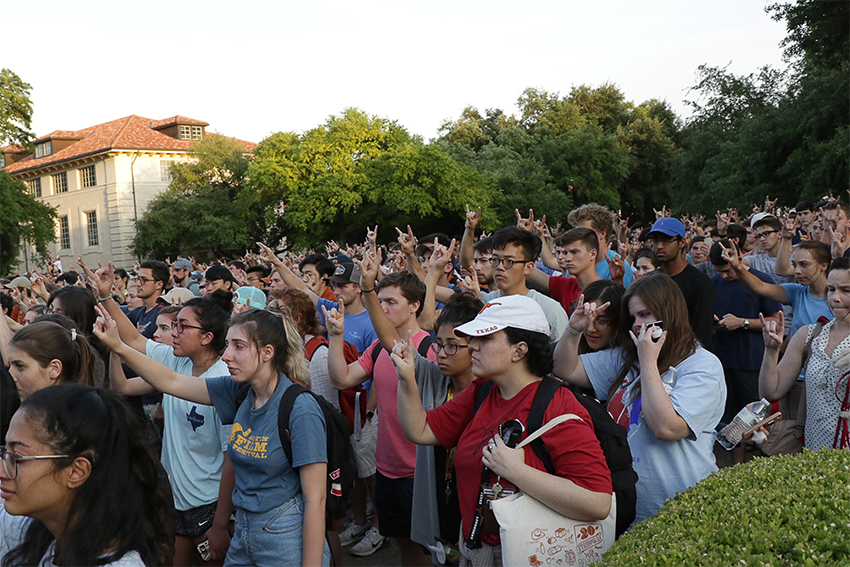 The sky faded to purple Wednesday night as Edwin McCain’s “I’ll Be” played softy in the evening air. One student lifted their horn to the sky. Another did the same. Within seconds, thousands raised their horns to honor the life of Harrison Brown.

The Main Mall was filled for a University-wide gathering hosted by Student Government in honor of Brown, the undeclared freshman killed in the on-campus stabbing Monday afternoon. The Tower bell rang 19 times symbolizing Brown’s 19 years of life.

Nutritional sciences junior Colton Becker said he met Brown last fall and was struck by how genuine he was and how much they had in common.

“I wanted so badly to help him succeed and to be a good mentor,” Becker said. “There was just something about him and his curiosity toward the world (and) his warm personality, which gave you that kind of energy … He harnessed the ups and downs in life, and he manifested them in kindness toward others. The heart of life lived within him.”

UT President Gregory Fenves said he offers his deepest sympathies and the University offers its strongest support for the families of the victims.

“What we are left with tonight is our new reality, a painful reality, that our lives have forever been changed,” Fenves said. “Harrison is gone, but he has left a legacy of positivity, thoughtfulness and devotion for us to absorb and to reflect upon.”

Fenves said Brown had a close relationship with his family, especially his father, who suffered from Lou Gehrig’s disease. During last year’s Austin walk to defeat the disease, Brown participated with his father and his brother, John.

“When the three of them neared the end, Harrison and John lifted their father out of the wheelchair, put their arms around him and walked him across the finish line,” Fenves said. “It was a gesture of love, (but) it was also a gesture of defiance. This disease would not defeat the three of them.”

“No matter what was going on in his life, he always wore that big smile on his face,” Fuentez said. “If he saw someone look down or upset, Harrison was there, cracking jokes and trying to put a smile on their face.”

The vigil concluded with a performance from Brown’s co-ed acappella group, the Ransom Notes.

Student Body President Alejandrina Guzman said the loss hit her when she watched a Facebook video of Brown singing, which went viral Monday evening. The video has since received more than 700,000 views.

“Tears began to roll down my face,” Guzman said. “His voice was so beautiful. I could feel the warmth of his heart. I didn’t personally know him, but I could feel his spirit next to me.”

Guzman said the University has numerous services to offer for those in need, including the Counseling and Mental Health Center’s 24/7 Crisis Line, the Behavior Concerns Advice Line, SURE WALK and Student Emergency Services.

“It’s okay to not be okay right now,” Guzman said. “The most important thing is we love each other and support each other as we mourn and celebrate Harrison’s life together.”